1/29/2020 - NC DOT has announced that both Cades Cove Rd, and Mt Sterling Road (284) from Big Creek into Cataloochee Valley will both be closed.  This effectively closes Cataloochee Valley to vehicle, bike or horse traffic.   You can still get in, but you have to hike in.  The roads are being closed to repair a partial landslide along the main road in.

Located off old Highway 284, in the Great Smoky Mountains National Park, beyond where most visitors go, is the trailhead for Little Cataloochee Trail.    This trail is beautiful, full of history, beautiful forest, ice cold creeks, old homesteads, and the stunning, Little Cataloochee Baptist Church. 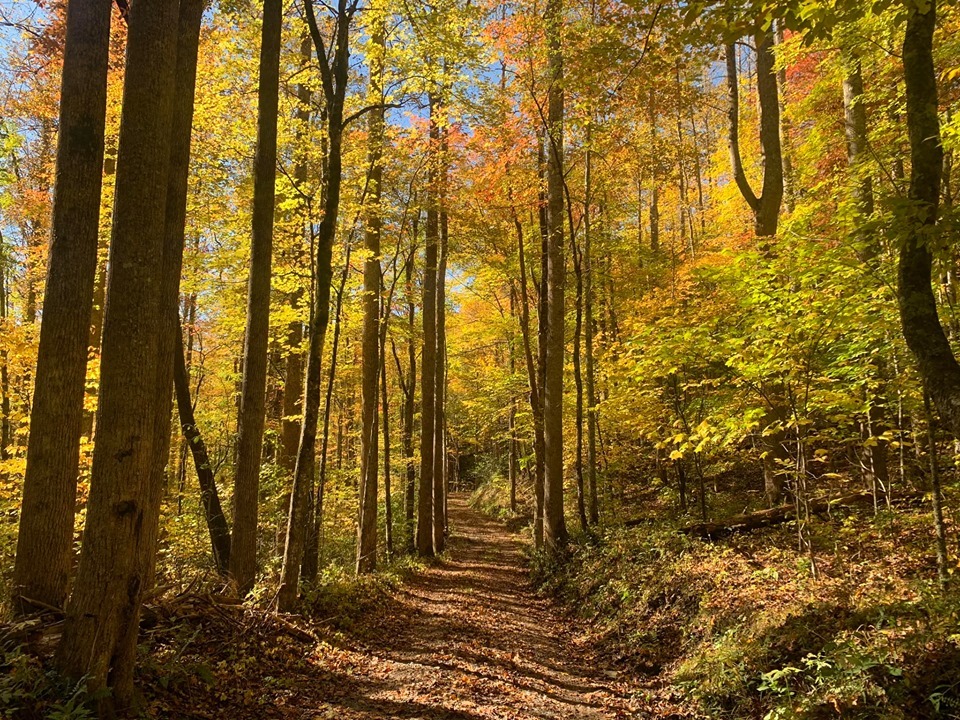 The trailhead begins at a gate and small road that heads down at a sharp angle, off the old gravel Highway 284.  There is a small pull off area, just across from the trail head.

You can also hike this trail from Big Cataloochee by hiking up Pretty Hollow Gap Trail, to the intersection with Little Cataloochee trail.   Going this way though is a more strenuous hike, due to a steep climb up and down a ridge.

From the trailhead on old Highway 284, your hike will begin as a sharp descent down and a switchback down to the first creek crossing. You'll then start to climb back up again.   This begins a series of up and downs for the next 1.5 miles, nothing too bad, but it will get your heart pumping a bit.

The surrounding woods and scenery are just beautiful, and it's so quiet and peaceful.

The History of Little Cataloochee 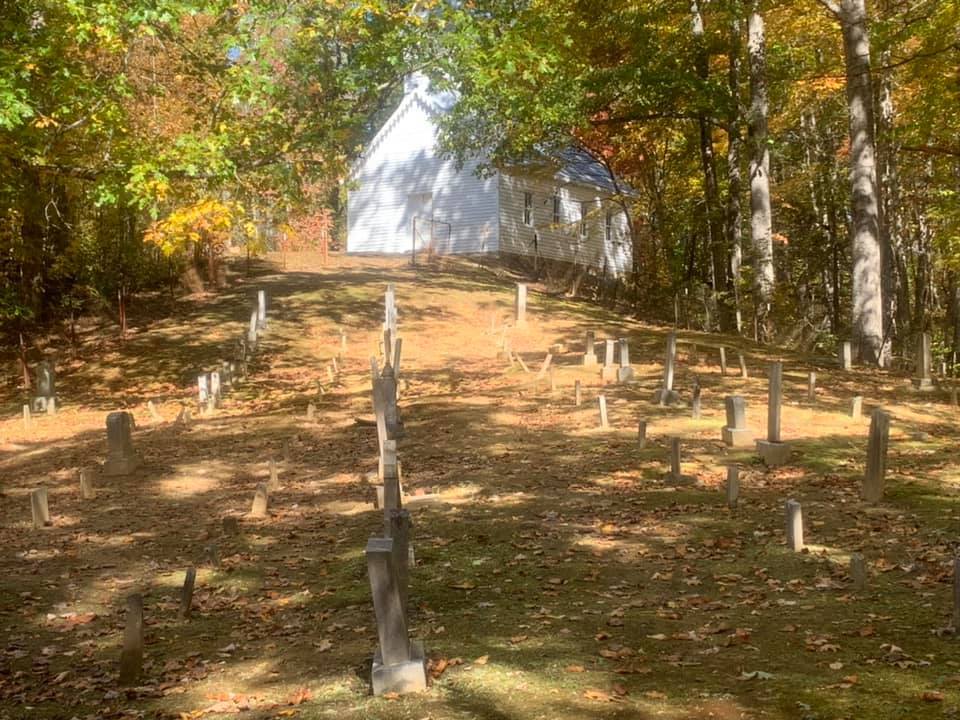 Many visitors to Cataloochee Valley don't realize that there are two sections: Big Cataloochee and Little Cataloochee.  Big Cataloochee receives the majority of the visitors, due to being easier to access, accessible by car, and of course the Elk.

Little Cataloochee requires a bit more work to get to, but is a real hidden gem for those that prefer to travel off the beaten path.

Big Cataloochee and Little Cataloochee are close to each other, but separated by Noland Mountain.  By the early 1900s, more than 1200 families lived in both areas.

At the 1.1 mile mark of Little Cataloochee Trail,  Long Bunk trail joins in from the right.  If you head up this trail for .02 miles, you'll find Hannah Cemetery. 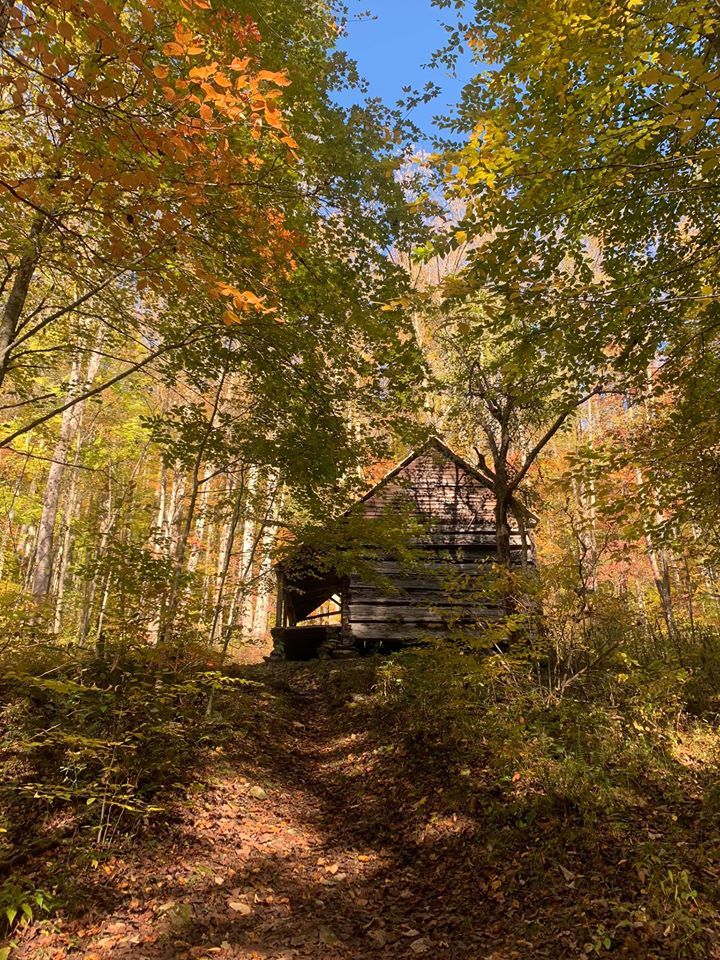 At 1.2 miles up Little Cataloochee Trail, you see Hannah Cabin up the hill a bit and to your right.

Hannah Cabin dates back to 1864, and was restored in 1976.  It's a beautiful cabin, full of history, that you can walk inside of.  The cabin was built by John Hannah, who worked the land surrounding the cabin.  Interestingly, the cabin’s brick chimney is one of three only brick chimneys left in the Great Smoky Mountains National Park.

One of John Hannah's sons went on to become lawyer, and purchased the bell for Little Cataloochee Baptist church.  Another of his son's became a park ranger, focusing on Cataloochee Valley.

John Hannah was also one of the Cataloochee Valley residents who refused to leave when the park was formed, and took the park to court, fighting them as far as he could.

We sat on the front porch of Hannah Cabin, enjoyed a snack, and tried to imagine how life was living there in 1864.  The cabin sits in a beautiful spot, and it was hard to leave.  But we packed up our gear, and headed on down the trail to Little Cataloochee Baptist Church. 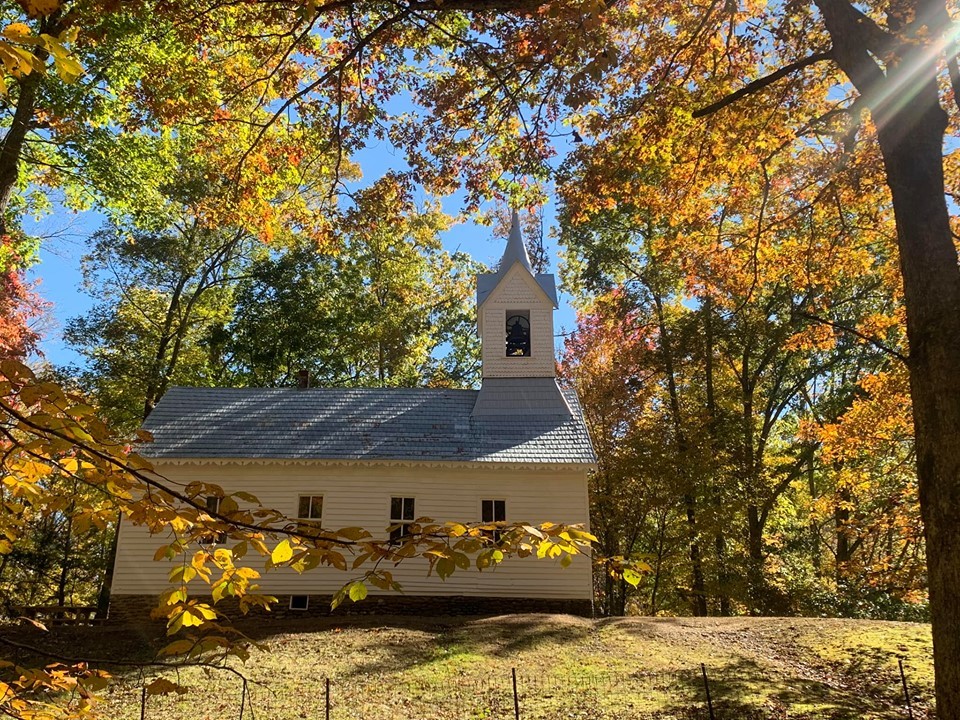 Little Cataloochee Baptist Church is located at the 2 mile mark, from the trailhead.  The last part of the climb is a little steep, but not terrible, and seeing the church and cemetery are well worth it.

Pay attention as you hike from Hannah Cabin up to the church, history surrounds you.

You'll see remnants of old buildings, tools, and farm equipment.  You'll also notice semi-clear areas full of small and young trees.  These were fields, farmed by the residents.   The hike is a walk back in time.

For those more perceptive, you'll also note a number of burned areas, including trees.  Controlled burns were done in these areas by the National Park to control the vegetation.

The church itself sits at the top of a hill, and is absolutely stunning.  We visited in the Fall, and the brilliant white church, surrounded by Fall Colors was just magical. 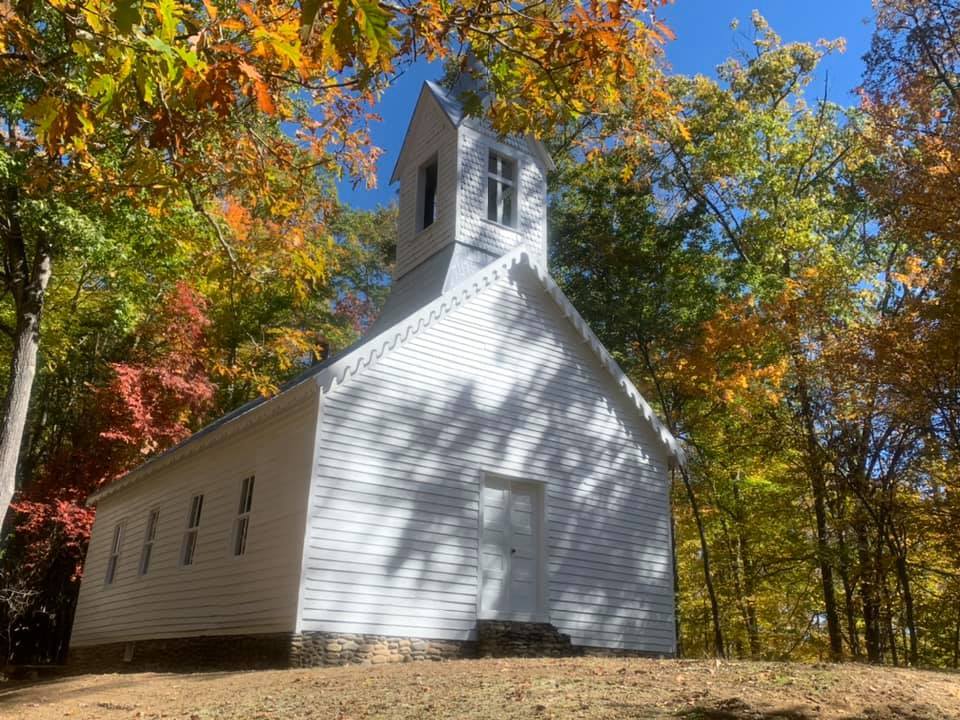 The church was built in 1889.  The interior is typical of an old, remote country church and is very plain, containing benches, an old wooden stove, and the pulpit.

Worship services were held a couple of times a month, and residents from all around would come to the church to see friends and to get the latest news (and maybe a little gossip).  Church services were very simple, and informal. 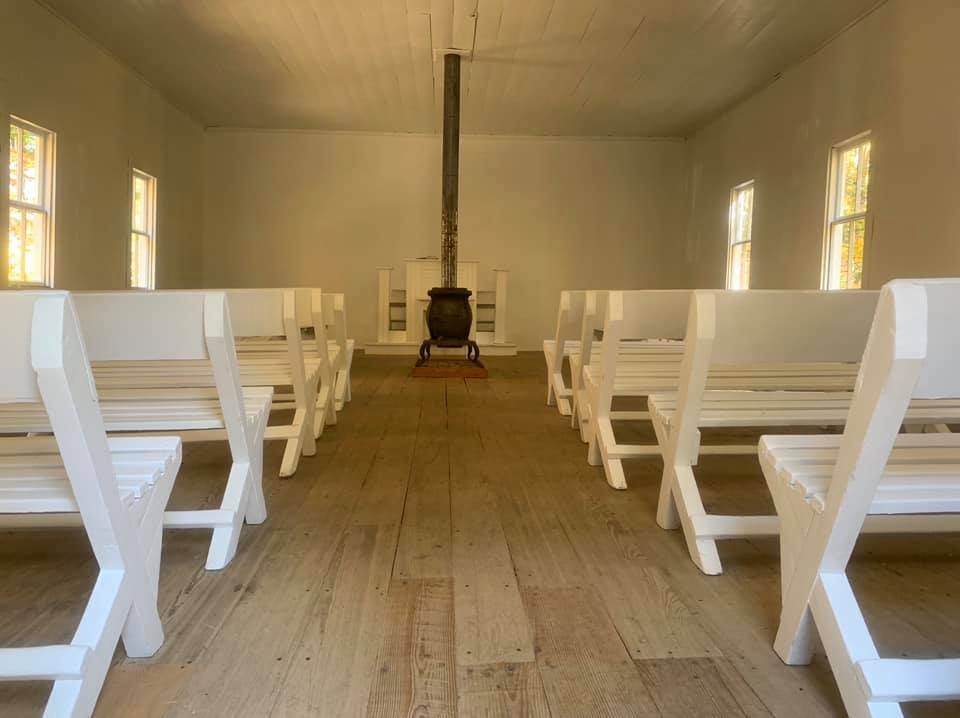 A fenced-in and well-maintained cemetery is just below the church, down a gentle slope.  The cemetery serves as the final resting place for many of the early Cataloochee settlers.

Note that some of the birth and death dates are not far apart, a sign of the hard and tough life these early settlers lived.

We stayed for a long time, just enjoying the peace and quiet, and taking photos.  I find it difficult to put in words, but there is just something compelling about this church.  We imagined kids running around, adults talking, picnics below the trees, and families visiting with lost loved ones in the Cemetery.  The essence of a hard but simple life.  We were envious.

But as the sun began to go down, we headed back to our Jeep to head home.

You can also continue another .7 miles down the trail, to visit Cook Cabin, or even continue all the way to the intersection off Pretty Hollow Gap Trail, but the last portion of this trail is more difficult. 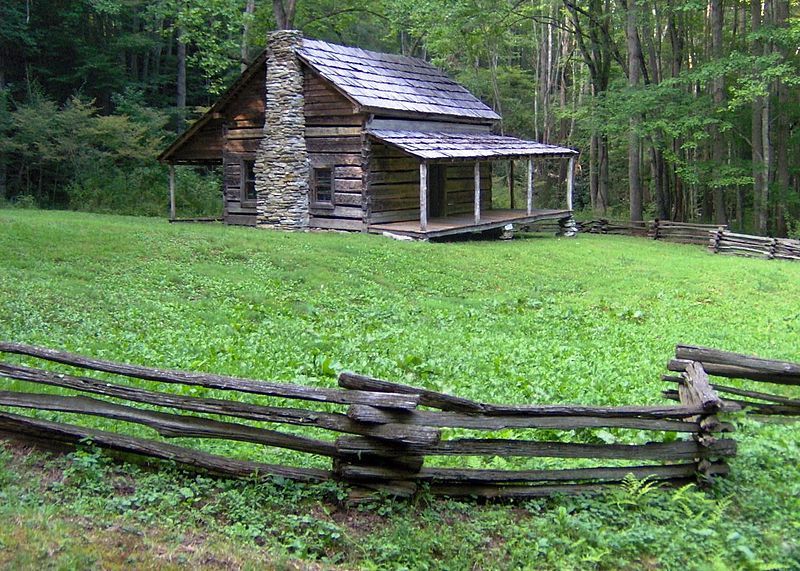 Dan Cook cabin, built between 1856 and 1860, then rebuilt using much of the original materials in 1999. (All the numbers from my trusty 'brown book'). So for less than 6 miles round trip, and maybe around 1000 feet of climbing, you get all this, plus the normal everyday beautiful Smoky Mtn forest.

We love Cataloochee Valley, and never get tired of visiting it, and hiking its trails.

This was our first time on Little Cataloochee Trail, and we thoroughly enjoyed this hike out to the church and back.  We would highly recommend this hike, and look forward to doing it again, and doing some more exploring.

Thanks so much. I have not and most likely will not be able to hike this trail. You have made it possible for me to enjoy the journey.

Can you get to the trail coming in from Cosby?

Some nice pictures of My Families Old Home place, My Great Grandfather James A. Hannah is buried in the Hannah Graveyard. He is the son of John Jackson Hannah. Mark Hannah was Uncle Mac’s son, who was the son of John Jackson Hannah. Mark was the First Park Ranger of that area of the Smokey Mountain National Park. Thanks for the Pictures, I truly miss the Old Home place. Your Right Beautiful in the Fall.

My family is from the Chattahoochee mountain..never got to go there but maybe before I die