Fontana Dam is a very popular attraction, located near Bryson City in Western North Carolina.  Fontana Lake was formed between 1942 and 1945 when the Little Tennessee River was impounded by the formation and construction of the Dam.  Fontana Dam is the highest dam east of the Rocky Mountains at 480 feet tall and 2,365 feet across. 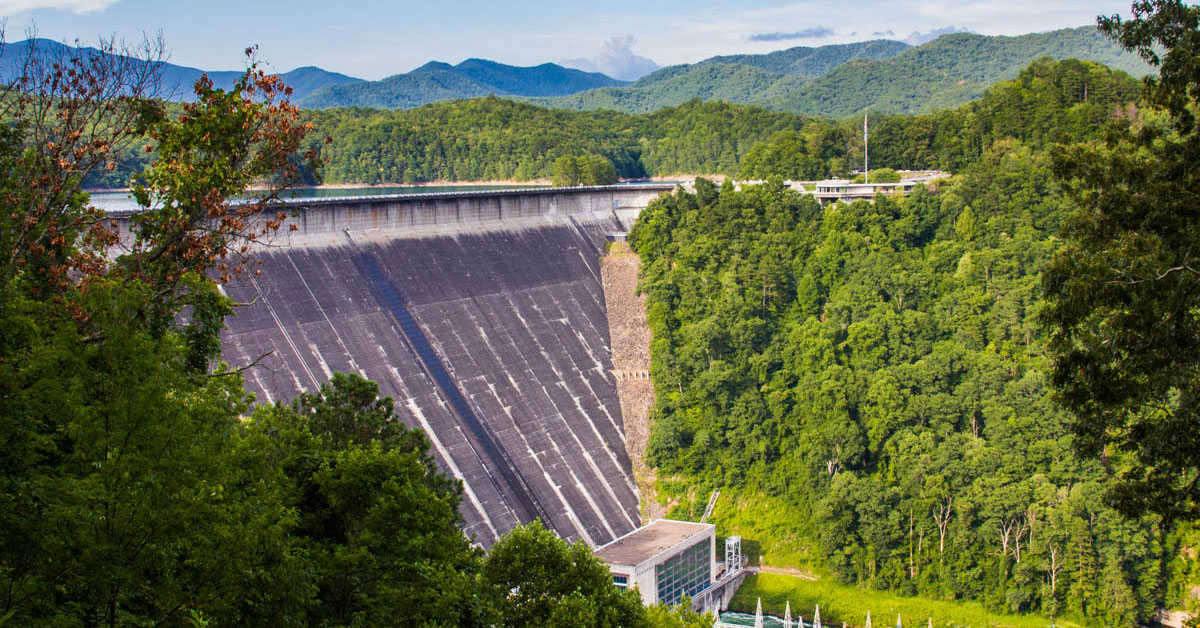 Fontana Dam is amazing site to see, as it's a massive concrete structure, that is frankly an engineering marvel.  The Dam measures 480 feet tall.  To give you some perspective, that is about the height of a 50 story sky scrapper.

The Dam is so large, that there is a two way road across the top, and yes you can drive over it to the other side.  In fact, the Appalachian Trail crosses Fontana Lake here, and the trail leads across the Dam.  Fontana Dam was featured in the 2015 Movie, A Walk in the Woods.

From I-40, take the Waynesville, NC exit for Highway 74 (call the Great Smoky Mountain Expressway).  Travel Highway 74 until you pass Bryson City, then watch for signs indicating Highway 28 North.  Follow Highway 28 which provides multiple lake access spots, and pull overs for taking photos.   At 25 miles, the road will end in a T.  Go right to Fontana Dam, and left to Fontana Village Resort.

One note, if you need food, water or gas, get it in Bryson City.  There really isn’t much after you pass Bryson City – Remember, the lake and dam is in the remote mountains. 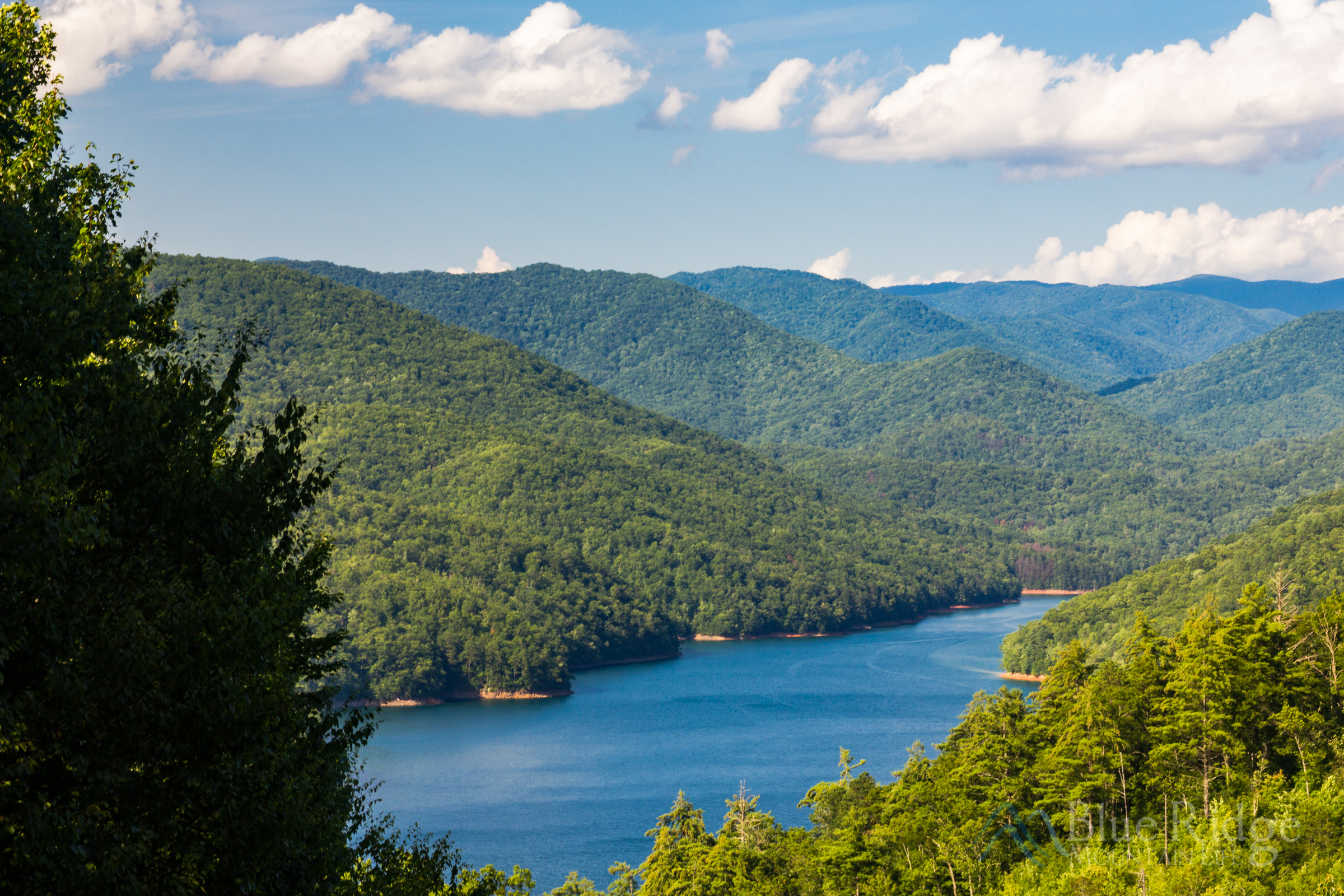 As you turn onto the Entrance Road, you'll see a small road go off to the right, that leads you to the Fontana Marina.  Continue going straight to reach the Dam.  The road will curve around and climb up a little, and take you to the entrance area for a very nice lakeside picnic area with restrooms.   The views here are incredible, so make sure you take some photos.

Just a little further down the entrance road, you'll reach the Dam itself.  Just prior, there is another picnic area to the right that includes Lake access for swimming.  To the left is the Visitors Center and parking. 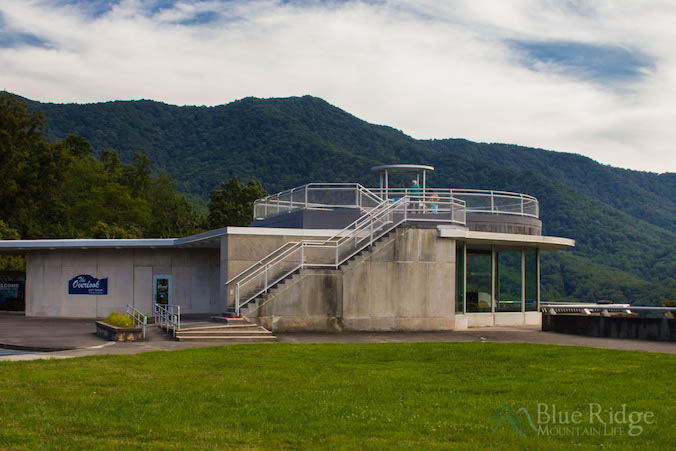 As you arrive at the Dam, you'll want to turn left just prior to enter the Visitors Center.   The Visitors Center contains information about the history of the Dam, including how it was constructed and how it operates.

The Visitors Center also has restrooms, and much to the joy of Appalachian Trail (AT) hikers, hot showers.  In fact, people hiking the AT often call the Visitor's Center the "Fontana Hilton".

The Visitors Center includes some really nice overlook areas for viewing the Dam from the top, and also includes a gift shop, and an upper deck that provides a higher view of the Dam itself.  The center is open from 9 a.m. to 6 p.m. daily from May through October except for major holidays. 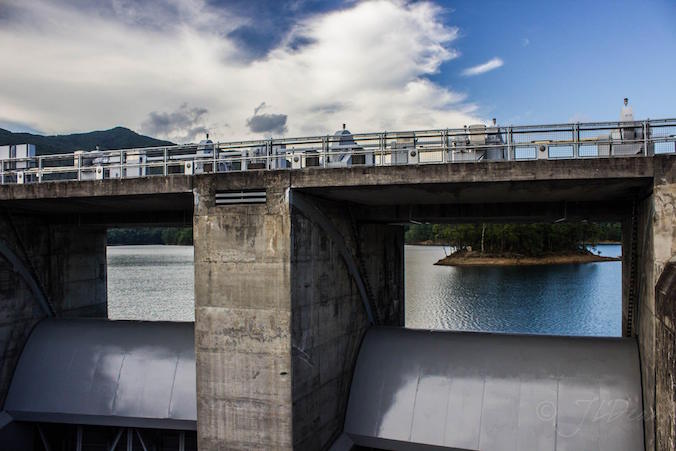 If you walk towards the Dam from the Visitors Center, you'll reach the two spillways.  These very long and wide tunnels were used to divert the Little Tennessee River during construction, but now serve to handle any excess water in Fontana Lake.  While rare, the TVA does open the gates, and allow water to "spill" down the massive concrete tunnels, where it sprays out into the river below the power plant. 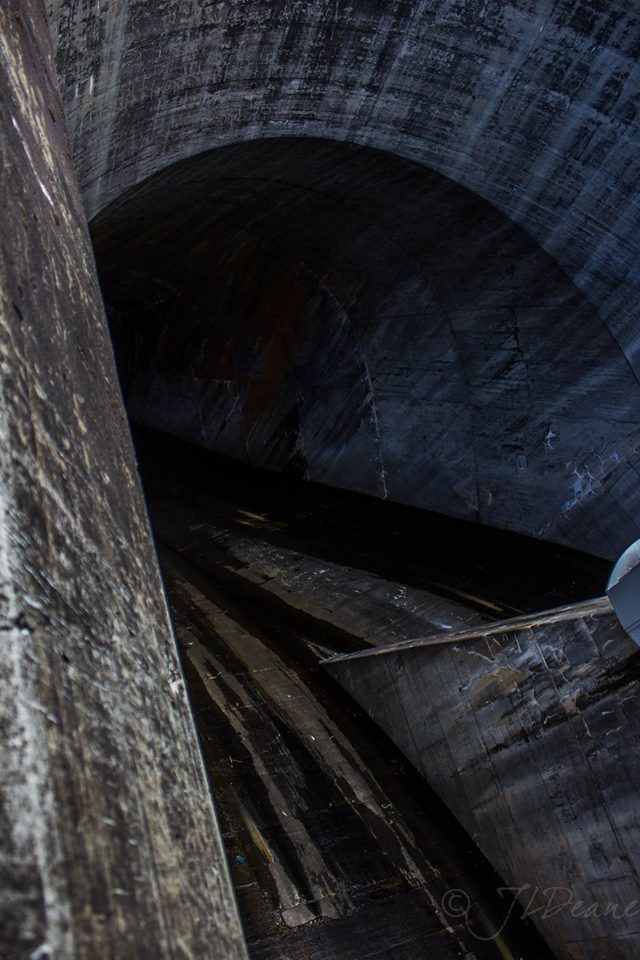 Looking over the edge at the massive tunnels is pretty breathtaking ... they're deep and run the entire length down to the base.

Fontana Dam from the Top

Next you'll reach the stairs going up the Dam itself.  As you climb the stairs, you'll see this view of the Dam to your left.  Note the maintenance access stairs. 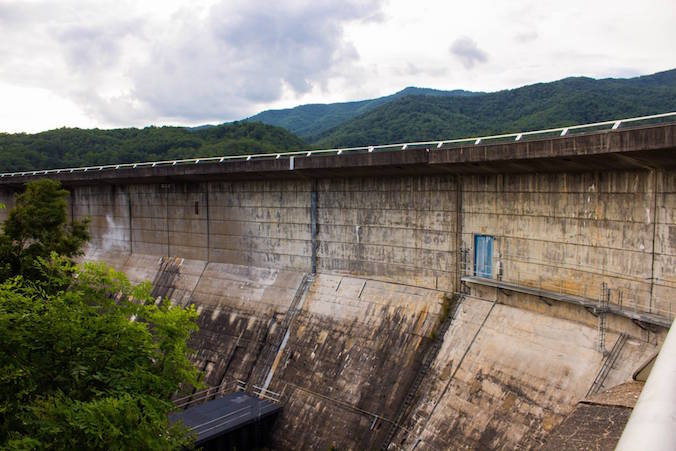 The stairs will take up you to the top of the Dam, and also to the two lane road that crosses the top of the Fontana Dam.  Yes, you can drive across it if you want.

We walked about half way across, just to see the view.  Looking over the edge, here's what you'll see: 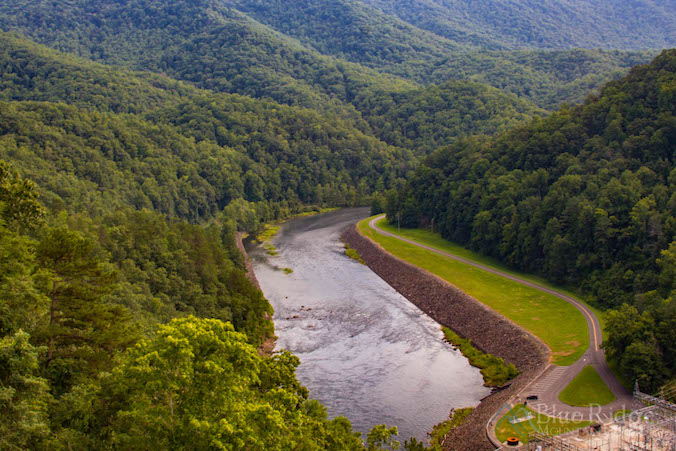 At the base of the Dam, the water flows through and turns turbines that power generators that create electricity.  The Dam is fully operational and generates power.  Make sure you read the history below to learn more about the purpose of building Fontana Dam, it was pretty critical to World War II !

We walked back to our car, and drove across the Dam, which was really neat, but honestly a little scary ... that is a long way down!

We thought we could get to the bottom of the Fontana Dam by crossing over it and taking the road to the left down.  But learned that the road only leads a very nice picnic area.  At the end of the road and short picnic area is a great view of the Dam itself (the lead photo of this article), and this plaque:

We later learned that access is the bottom of the Dam is via a different road on the other side of Fontana Village Resort.  There are signs to follow that will lead you there from the resort.

In 1910, ALCOA (Aluminum Company of America) began looking looking at the Little Tennessee River as a possible source of power for its aluminum production plant located in nearby Alcoa, Tennessee. By the mid-1930s, Alcoa had purchased the land that is now the Dam site. 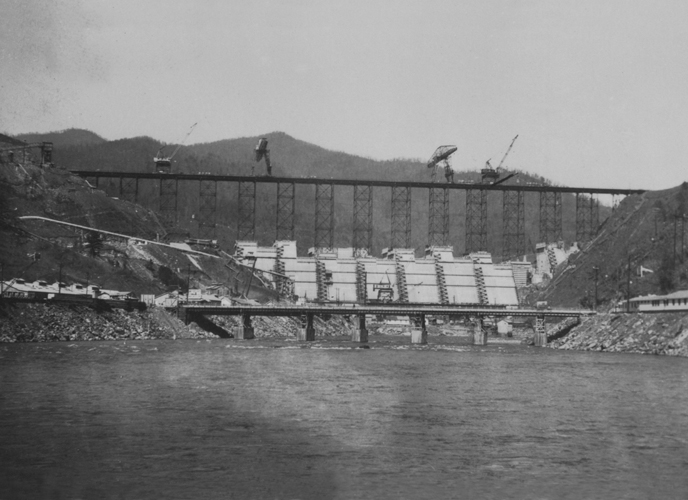 The TVA was concerned about flooding that the Little Tennessee River was causing, and ALCOA needed power from the river, and ALCOA assumed control of the project, but wanted the TVA to build the Dam.   The TVA didn't have the funds, until the outbreak of World War II in 1941.

WWII required massive increases in the production of Aluminum, thus the TVA got the funding it needed to construct the Dam. Construction began January 1, 1942.  The building of the Dam, also required the purchase of 68,292 acres of land behind and around it.  As a result, 1,311 families, 1,047 graves, and more than 60 miles of roads had to be relocated.  This of course is the beginnings of the Road To Nowhere story.

The Dam also provided power for a nearby government Nuclear research facility.  This facility played a key role in the creation of the nuclear bombs used at the end of the war.

Construction of the Dam required more than 2,818,000 square yards of concrete.  Due to the size and amount of concrete, special expansion joints had to be created that contained cooling units.

The Dam also provided work for many people in the area.  As a result, local camps sprung up and the nearby small towns were overwhelmed with people.  Local Fontana Village was one of the largest cities in North Carolina at the time, exceeding Asheville in population during the Dam's construction.