Clingmans Dome is one of the highest points east of the Mississippi at 6,643 and the tallest mountain in Tennessee.  It’s also one of the most popular tourist attractions in the Great Smoky Mountains National Park due to the incredible 360 degree view from the observation tower at the top.

At the top is an observation tower that is accessed via a circular concrete ramp that leads up to a saucer shaped observation tower and platform that offers some incredible views of NC and TN.  The viewing distance is typically around 20-25 miles, but varies greatly depending on the weather.

On exceptionally crisp and clear days, you can see as far as 100 miles.  On the other hand though, Clingmans Dome is also often “fogged in”, especially during the early morning and evening hours.

The 7 mile drive out to Clingmans Dome ends in a large parking lot with restroom facilities, and a small visitor/welcome center.  The view from the parking lot alone is incredible and is as high as many people go.

The trail to the top is short, only .5 miles, but pretty steep.  The grade is right at 13%.   As a result, we consider the short hike up strenuous.  Fortunately the park service recognized this and placed a number of benches to the side of the trail so you can stop and catch your breath.    What makes this trail a little tougher for most is the high elevation and thinner air.  But while steep, the trip up is definitely worth it if you can make it.

The trail is located at the far end of the parking lot, next to a really large rock.   The welcome/visitor center is located just on the other side.  The paved trail leads up through a spruce-fir tree forest.  The smell of the trees is incredible, and frankly one of the highlights of the visit.   You’ll feel as if you are in a Christmas tree farm as you climb up.

About the time you think you can’t go on any further, you’ll reach the top, and see the observation tower, ramp entrance, and a circular set of concrete benches.  Sit down, take a breather, grab some water, and congratulate yourself for making it to the top.   You’ll be surrounded by spruce fir trees, so enjoy the sites and smells.

The walk up the ramp is short and relatively easy.  But be prepared, the temperatures here can be cold – often 10 – 20 degrees colder than the surrounding lower elevation areas.   Winds are often pretty high at the top as well, making it feel even colder.  You’ll want to dress in layers, as even in the summer, the temperatures can be cool, as low as 30-40 degrees in July!

Just a tip from us locals: The weather here is also very unpredictable and changes rapidly.   If you arrive and the view is fogged in, just hang around for bit.  Chances are it will clear up.   Rain can often move in quickly in the summer too, so we recommend bringing along a rain jacket as well.  We don’t recommend umbrellas due to the high winds.

On your way back down to the parking lot, watch for the signs to access the Appalachian Trail (AT).  Take a few extra minutes, and walk out to and along the AT, just to say you’ve been on it.   You might even run into a through hiker or trail volunteer who will often share some great stories.

If you do see a bear, maintain your distance.  If the bear pays particular attention to you or moves towards you or paws at the ground, you’re too close.  Slowly back away while continuing to face the bear.   The majority of the time the black bears in the park are not aggressive, and as long as you maintain your distance they will avoid you and run off.  If you see cubs, which we did one year (see pictures below), know that their mother is not far away.  You do not want to be between a cub and it’s mother.   The bears are wonderful and beautiful animals – Just respect them and be smart.

Here are two cub photos my wife captured during one of our visits to Clingmans Dome.   Don’t worry, a high powered telephoto lens was used, and the photos have been cropped.  We were safe, although I can’t say the same for a number of other people that were far too close!

An interesting but sad piece of Clingmans Dome history is a B29 Flying Fortress crash that occurred in in 1946.  The plane crashed near the summit, killing all twelve crew members.   Pieces of the aircraft can still be scene while hiking along Andrews Bald trail.

The observation tower was built in 1959, as part of an effort to improve the park due to it’s increased visitation and popularity.  The tower is a modern design, done by an architecture firm in Gatlinburg TN.  The tower was built by a construction company in Waynesville NC.  The modern design was sharply criticized as may felt it didn’t blend well with the rustic surroundings.  The tower cost $57,000 and opened on October 23, 1959.

More photos from our visits! 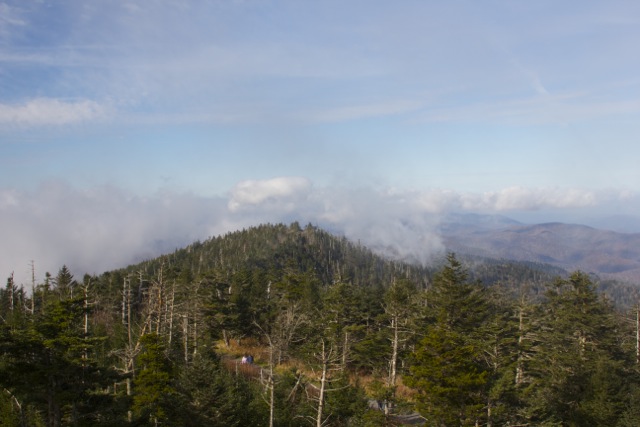