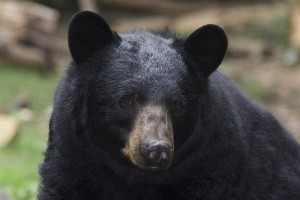 There has been a lot of talk recently on various Facebook groups and in the news about the amount of bear activity in The Great Smoky Mountains National Park.   While the activity this year is no more or less than prior years, early spring is the most active time for Black Bears, and in particular females with cubs.

This works out to be around two black bears per square mile.  Even with these numbers, you’re likelihood of seeing one is fairly low.   We’ve been hiking in the park for more than eight years, and have only seen two bears.

The look of black bears varies based on their location, but black bears in the Great Smoky Mountains National Park are black.  They can be upwards to 6 foot tall, and 3 foot tall to their shoulder when on all fours.  During the summer months, when well fed, male black bears can weight up to 250 pounds.  Females tend to weight less, at a little over 100 pounds.

Black bears have a strong sense of smell, can see in full color like humans, can run upwards to 30mph, and are very skilled at climbing trees.  They are more active in the mornings and evenings.

You can read more about black bears in the Great Smoky Mountains National Park on their website.

If you are in the very rare instance of being physically attacked, fight back with everything you have.  DO NOT play dead, this does not work with Black Bears.  I personally carry a small pocket knife with me, not only due to it coming in very handy, but also for defensive purposes if needed.

Here’s a video that shows someone being too close, and the bear let’s them know by stomping and hissing.   Some early signs that they were too close is the bear changing behavior.  Notice that it keeps watching them.   If a black bear is watching you and changing its behavior, and especially if it makes noise, stomps or paws you are too close.

The Biggest Threat to Black Bears 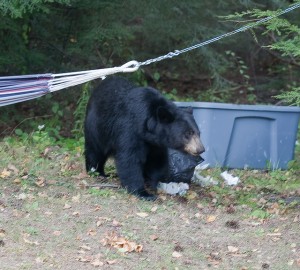 You might be surprised to learn that the biggest threat to black bears is people.  Specifically our trash.   A black bears keen sense of smell helps then forage for food, but also attracts them to human food and garbage.

People feeding bears, either intentionally or unintentionally through garbage can cause major issues, primarily losing their fear of people.  When the bears are fed, or see people leaving trash they associate the food with people.  When this occurs, the bears may begin to approach people looking for food leading them to become unpredictable and often dangerous to people.

Black bears aggressively approaching people can often result in the bear having to be euthanized for safety reasons.  A very sad end result.  Studies have been done that show bears that feed from humans and human trash don’t leave near as long as bears that feed off natural food sources.  Why?  These lose their fear of people, get shot by people protecting themselves or their homes, get hit by cars, or killed by poachers due to being easy targets.

Littering, feeding the bears, or improperly storing food items can result in $5,000 fines issued by Park Rangers.  This can even result in 6-month jail sentences.  Remember: Garbage kills bears.

How can you help? 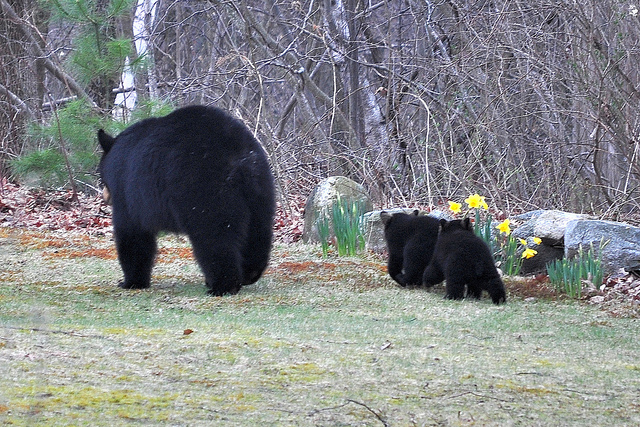