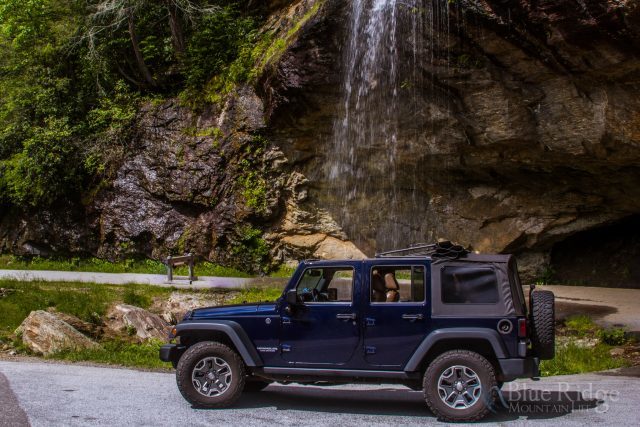 Our Jeep parked in front of Bridal Veil Falls – You can no longer drive under this waterfall for now.

Bridal Veil Falls is a 60′ cascade, and 120′ tall waterfall, located just outside Highlands, NC that is literally roadside, meaning you can drive up, almost right next to it.  You were able to drive under it until recently, but that is not currently allowed.
Location: Highlands, NC
Roundtrip Distance: The waterfall is roadside.
Difficulty: Easy – No Trail, the waterfall is in the parking area.
Handicap Accessible: Yes
Dog Friendly: Yes
Features: Waterfall, roadside parking
Directions: Take I-40 West take 23/74 W towards Waynesville (Exit 27). Take 23/74W to Franklin. At Franklin take Highway 64 East toward Highlands. Bridal Veil Falls will be on the left on Highway 64, about 2.5 miles before Highlands, NC
Recommended Gear: No special gear, the waterfall is roadside. Just bring your camera!
Map:

Bridal Veil falls is a classic and famous waterfall.  There are thousands of photos on the internet, over the course of many years, where people have taken pictures of cars under the waterfall.    Highway 64 was originally routed to go under the falls, but due to dangerous icy conditions, the road was later routed around the falls, so that access to drive under the falls could be controlled. 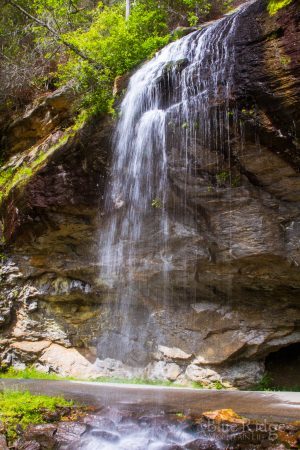 The waterfall is part of a small tributary for the Cullasaja River.   You can still visit Bridal Veil Falls NC, and pull very close to it, but you can no longer drive under it, you can only walk under it currently.

Even under large rainfall conditions, Bridal Veil Falls NC doesn’t have a super strong water flow, making it fun and safe for kids to get under and explore.   There are no large drop-offs or large rocks to slip on either.   Busy Highway 64 is very close though, so keep an eye out for those little ones.

In drought or low rain conditions, the falls can often be just a minor trickle.

Due to the fall’s popularity, it can often be a bit conjested here, especially on the weekends in the summer.

The best time to view Bridal Veil Falls is in the Spring, after some significant rain.  During dryer seasons, the waterfall can be just a small trickle or even nearly dry.

While the cascade you see is about 60′, the whole waterfall is nearly 120 foot’,  so much higher than it looks.

While visiting, be sure and check out nearby waterfalls: Cullasaja Falls and Dry Falls.   See our Waterfall Guide for lots more waterfalls you can visit!

Here’s a video I found so you can see Bridal Veil Falls.  In this video, the road is open, but currently it is closed, allowing no vehicles to drive under the waterfall.

My aunt is handicap has always wanted to walk under a water fall….would that be possible for her here?!?

Yes, I would think so. It’s a paved road under the falls. Closed to vehicle traffic, but should be accessible for someone handicapped to go under.