In 1987, the last section of the Blue Ridge Parkway was completed.  The section was unique, as it was a 1,243-foot sectional concrete bridge, that wraps around a part of Grandfather Mountain, and cost $10 million dollars to complete.  The section was named Linn Cove Viaduct, and is one of the most unique and popular attractions along the Parkway.  People travel from all over the world to see it, and drive across it. 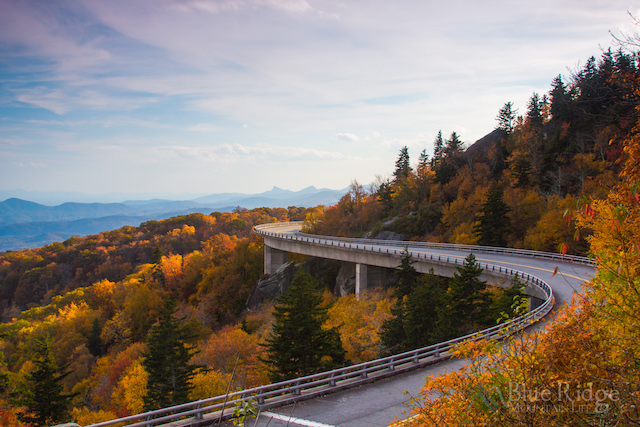 During the final stages of the The Blue Ridge Parkway’s construction, Parkway engineers were faced with a unique challenge.  They needed to find a way for the Parkway to cross Grandfather mountain, but not damage it.  Traditional cut and fill strategies would have caused significant damage and erosion to the famous mountain.  The solution was to build a bridge that not only brought visitors around the mountain, but also followed the contours of it to blend with the scenary and shape of the mountain.

Linn Cove Viaduct was completed in 1987, and also completed the construction of the parkway itself.  The bridge literally seems to float along the side of the mountain, and is not only very functional, but beautiful as well.

To drive across this engineering marvel and simply gorgeous bridge, drive to Milepost 304.  Linn Cove Viaduct is located 78 miles north of Asheville on the Parkway, or about 10 miles north on the Parkway from Linville, NC off Highway 221.

As you drive, note the contours of the bridge as they follow the contours of Grandfather Mountain immediately next to you.  The views from the bridge are absolutely outstanding.  It really helps to bring a passenger with you that can take photos as you drive across the bridge.  The bridge is also curved in the corners, adding to it’s smooth flow.

Try to avoid slowing down too much or stopping on the bridge, as you could easily get rear-ended due to other travelers trying to enjoy the view.

Located on the Parkway, and just to the south of Linn Cove Viaduct in the Linn Cove Viaduct Visitors center and museum.  The visitor’s center has restrooms, and in the store and museum you can learn more about the viaduct, and it’s construction.  There are is also a number of really nice books, and parkway memorabilia for sale.

Two really nice features are the scale model of Linn Cove Viaduct you can see, that really gives you some perspective on the size of the viaduct, and it also shows how construction was done.  The other is a video you can watch that tells you more about the Viaduct and shows you how it was constructed, and when it was opened.

Unique Views of the Viaduct

If you’re hear for a sunset you, you’re in for a pleasant surprise on a clear day.   The scene can be really gorgeous, as I lucked out and captured in the photo below: 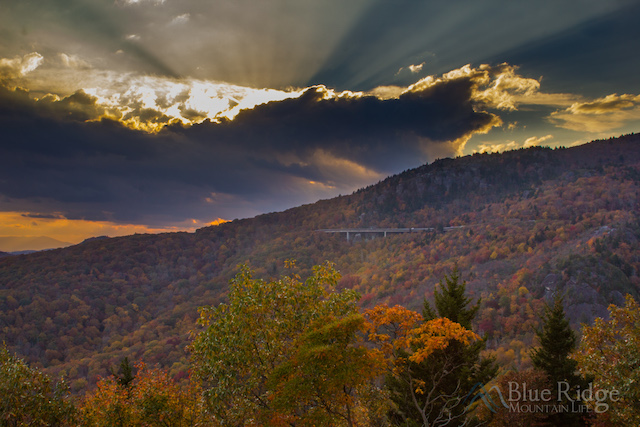 For a completely different perspective of the Viaduct that most see, hike the short paved trail, located at the end of the Visitor’s Center parking lot.  This very short and easy trail will take you through the forest, and up to and under Linn Cove Viaduct.  The trail really provides a unique view of the Viaduct, and is well worth it. 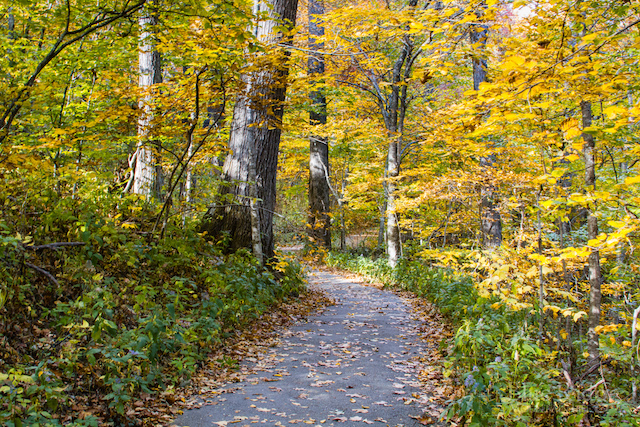 You can visibly see first hand the large footing placed into the side of Grandfather mountain, and also the pre-built 50 ton each concrete sections that were brought to the site, and put together to form the Viaduct. 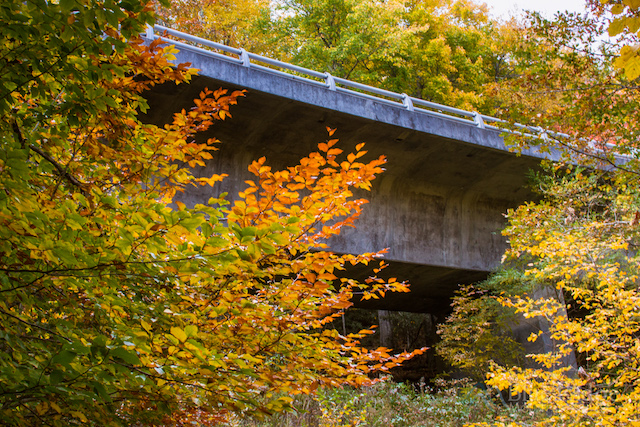 The paved trail connects to Tanawha Trail, which will take you beside Lincove Viaduct.  The trial cuts across the side of Grandfather mountain, and is not only a neat trail, but provides some very unique and interesting views of Linn Cove Viaduct. 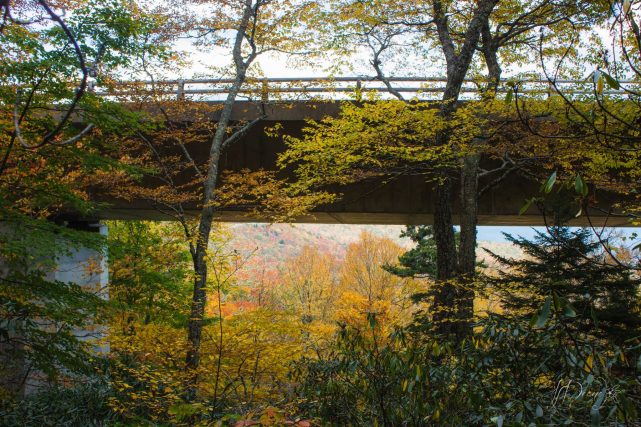 This trail can also be used to access one of the most popular photo spots for the Viaduct, located on it’s north side, as seen in this photo: 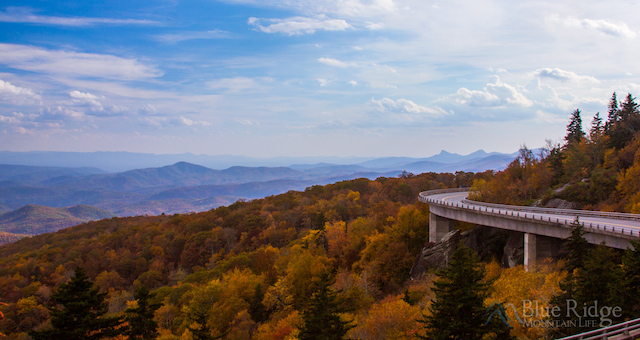 To access this photo spot, after the pavement ends on the trail from the visitors center, continue to follow the same trail as the pavement ends.  It will twist and turn, and take you across a number of large rocks, and even a really neat wooden bridge. 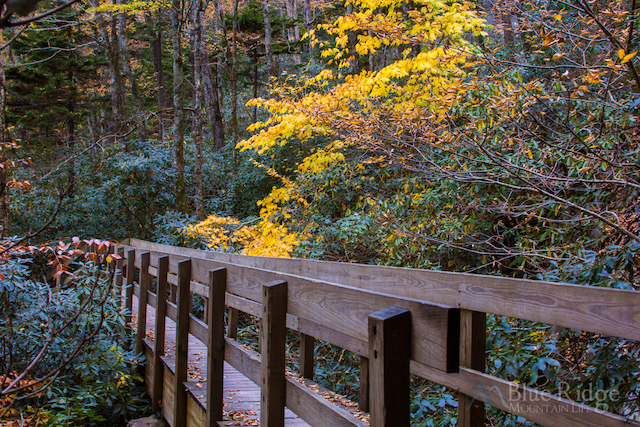 You’ll see the Viaduct on your right the whole way.  As you approach and pass the end of the viaduct, watch for a small trail leading down and to your right.  There is no sign.  This small trail will lead to the base of a large boulder.  Climbing to the top, results in this view:

But be VERY careful climbing onto the boulder, the drop on the other side is significant, and falling could lead to serious injury or death.  If you are at all unsure, don’t climb up.

This photo location can also be reached by parking alongside the parkway, on the north side of the Viaduct via a short but very steep trail up to the top of the rocks.  Going up isn’t too bad, but going down is a bit dangerous.

Photography Tip: Morning sun is better for taking this very famous photo, so get there early and you’ll have less cars in your photo as well.

The Tanawha Trail is a 13.5-mile trail that runs along side the Parkway from the Beacon Heights parking lot at mile marker 305.5 to Julian Price Park at mile marker 297.   This section of the trail is also part of the the Mountains-to-Sea Trail which goes from the Great Smoky Mountains National Park, to the Outer Banks.

Here’s a video, taken on a GoPro, of some visitors driving north on the Parkway and crossing over Linn Cove Viaduct: