For a decade (1970 - 1980), the Land of Oz Theme Park in Beech Mountain NC was one of the most popular theme parks on the east coast.   Thousands of people from all over the world flocked to see this one of a kind, and unique theme park.  The Land of Oz not only allowed you to see Oz but experience it alongside all of the popular characters.

Due to a number of complications and issues, the park closed in 1980, never to officially reopen again.  But, today, you can see it, if you're quick.  We clicked our heals together, and recently returned from a visit to Oz, and we'll tell you how you visit as well.

Don't worry, no tornados are involved!  Well, at least real ones ...

Where is the Land of Oz?

What remains of the Land of Oz Theme Park, is located at the pinnacle of Beech Mountain NC, near the top of the ski slopes.  Much of the park's land is now a housing development, but what remains is located on private land, and is well kept, using funds from the yearly special events.

Elevation of the Park is about 5500 feet, and offers exception views of the surround Blue Ridge Mountains, and while walking down the yellow brick road.

Our Land of Oz Videos Autumn in Oz is the oldest and largest special event at the Land of Oz.

For 2023, you'll join Dorothy, the Scarecrow, the Tin man, and the Cowardly Lion as they journey down the yellow brick road to find Emerald City a the Wizard of OZ.  Along the way, you'll even run into Munchkins, Flying Monkeys, Toto, and yes, even the Wicked Witch!

There is no other Wizard of Oz event like this one, anywhere the country.  This is as real as it gets!

A Visual Tour of the Land of Oz

Your Journey to the Land of Oz begins at the Beech Mountain Ski Village, where you'll present your tickets to Oz staff members at the check-in area.  We were given wristbands and instructions for when and where to to meet our bus.

Boarding coordination, instructions, and entertainment were provided by "Uncle Henry" - You'll love him.

We boarded our bus with a number of other people, and began our trip up to Oz, located at nearly 5,500 feet at the top of Beech Mountain, and the entrance to the Land of Oz.   With all of the twists and turns on the way up, it as sort of like riding in a Tornado!

The buses are currently only used for 2018, as normally you would ride up on the Beech Mountain ski lifts, but the lifts were under construction this year, and unavailable.

The Fountain of Youth 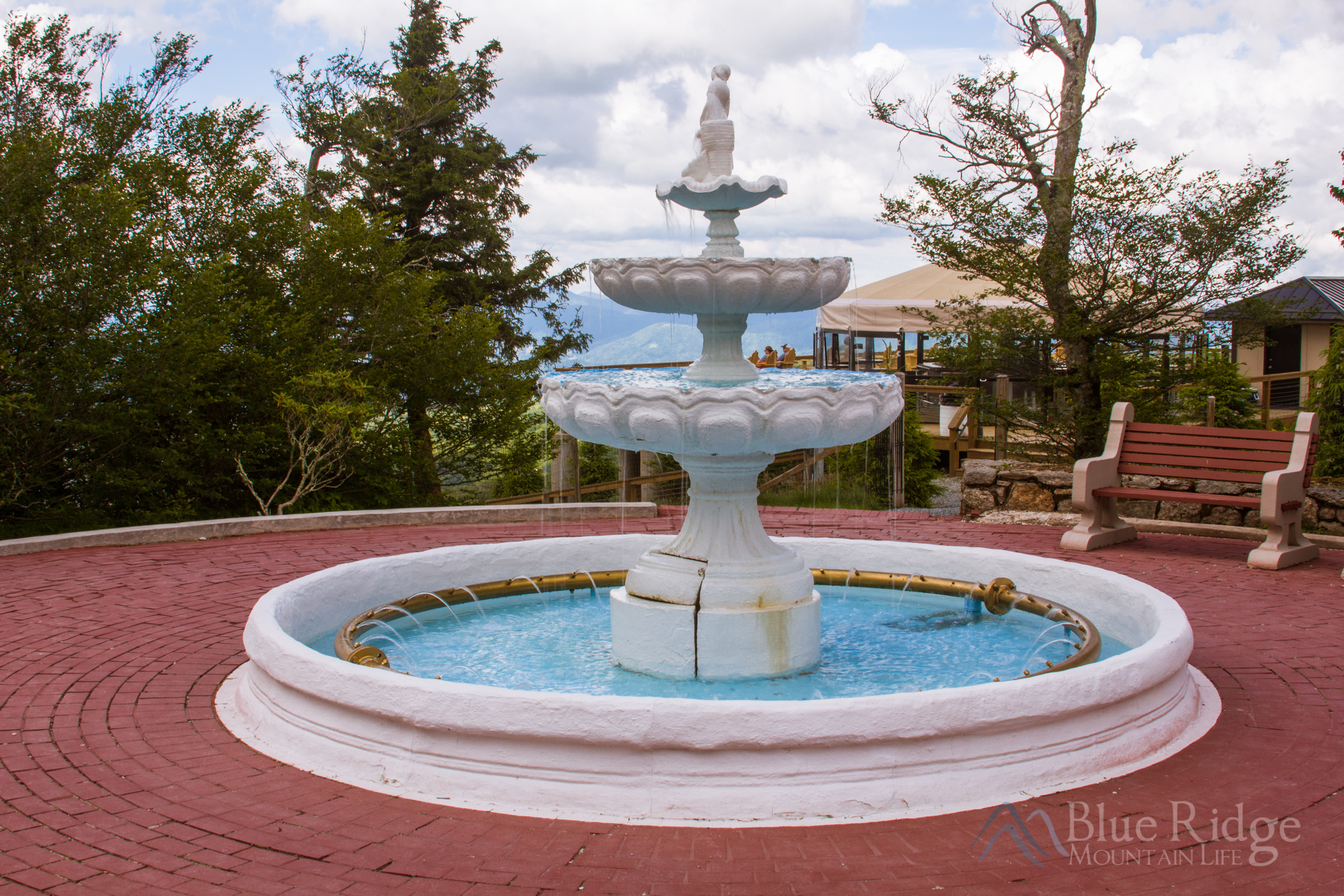 Our first stop in Oz was at the Fountain of Youth, where we were mentally transformed from adults into children again.   The park's designer, Jack Pentes, actually crawled around on the ground, through the grounds so he could see things from a child's perspective.

During the our Journey with Dorothy visit, An Oz team member introduced us to the park, told us what we could expect, and provided some history of the Land of Oz. 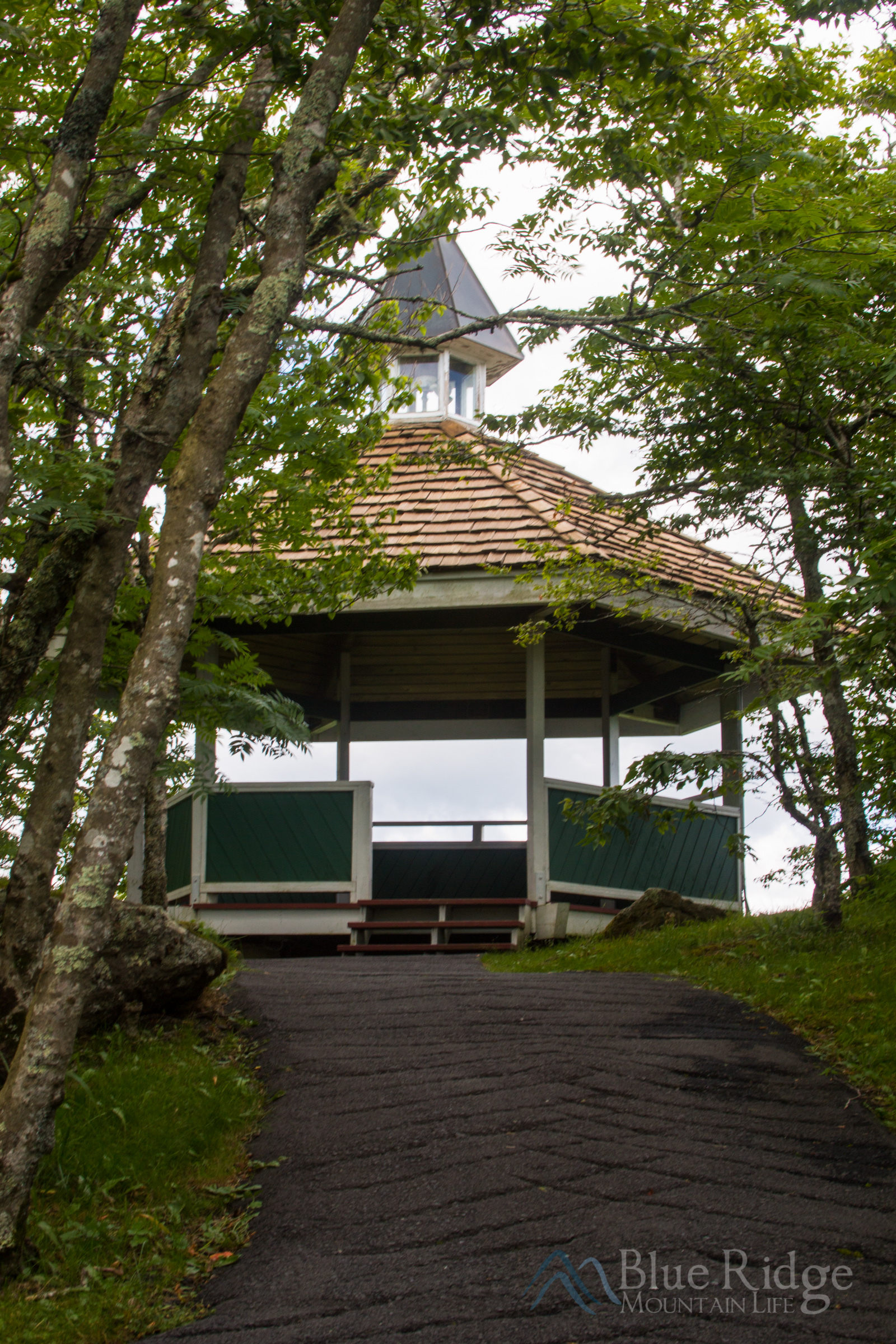 The Gazebo was built on a cliffside and intended to provide visitors with outstanding mountain views.   They accomplished their goal well, and the views are outstanding.

Be sure to take a few minutes here to enjoy the views and take some scenic photos. 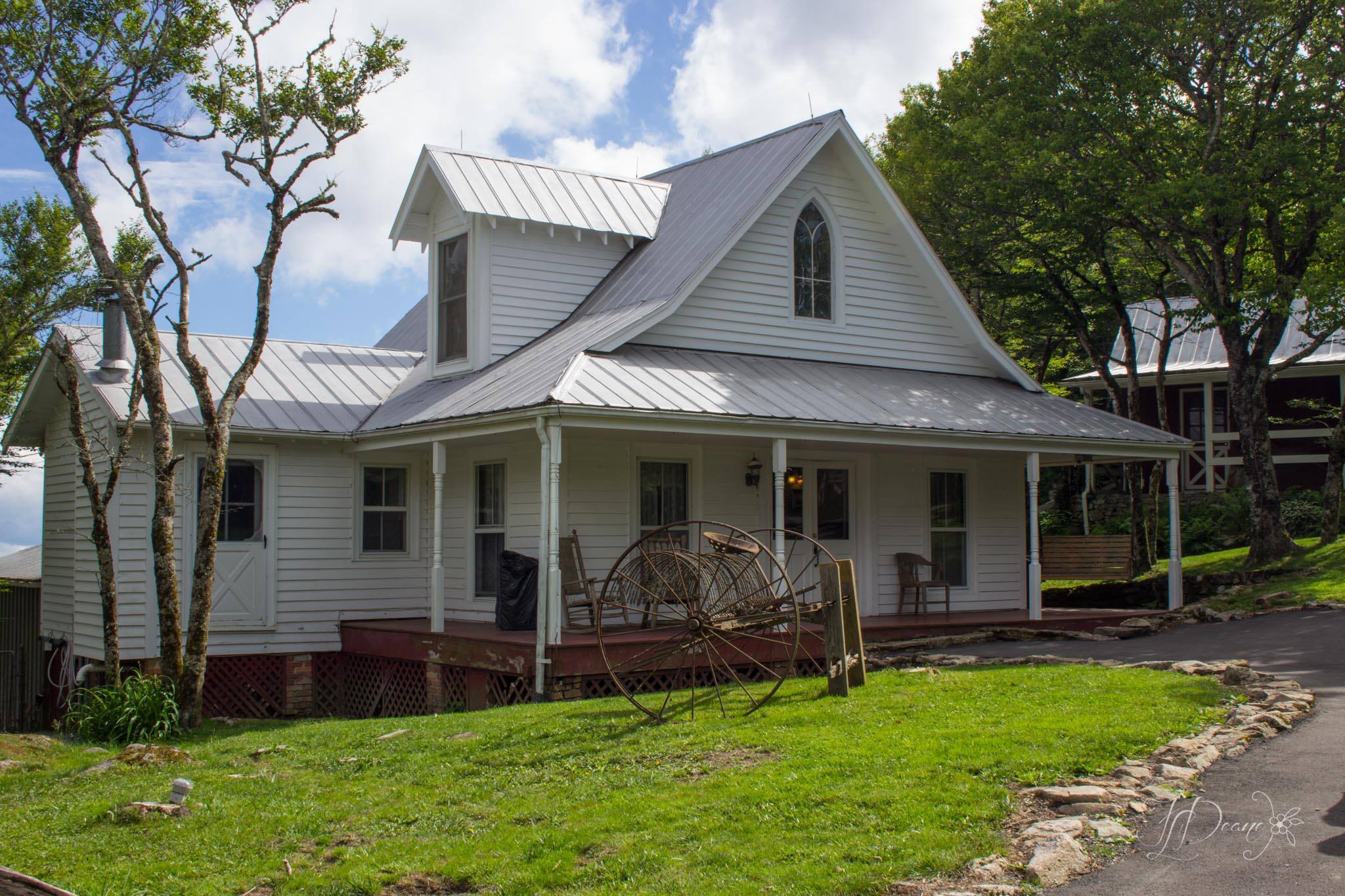 The amount of detail put into this home and barn is absolutely amazing.  The house is gorgeous, and while not a true representation of the movie home, very realistic.  All around the home are various items you'll recognize from the movie. 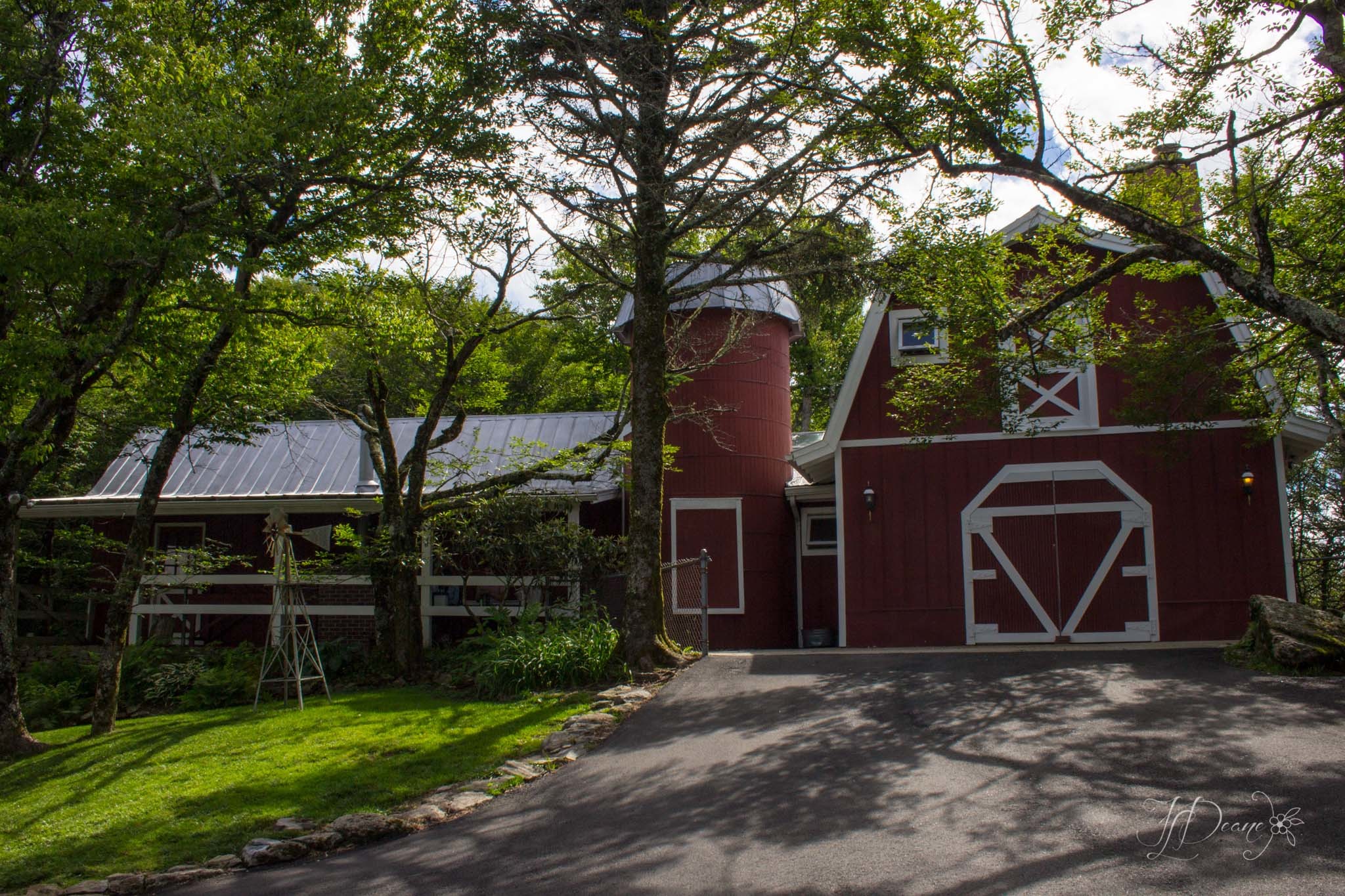 To the right of Dorothy's home is the barn.  During the Autumn in Oz Event, the barn is where your first performance begins.

You'll watch a song and dance show here with Dorothy, Hunk, Hickory, and Zeke, then follow Dorothy over to her house, where she'll perform Somewhere Over the Rainbow, followed by a visit with Professor Marvel.

One of the things we really enjoyed during both events was the number of little girls dressed up as Dorothy.  During the Journey with Dorothy event, while Dorothy was singing, the actress she invited the children to join her. 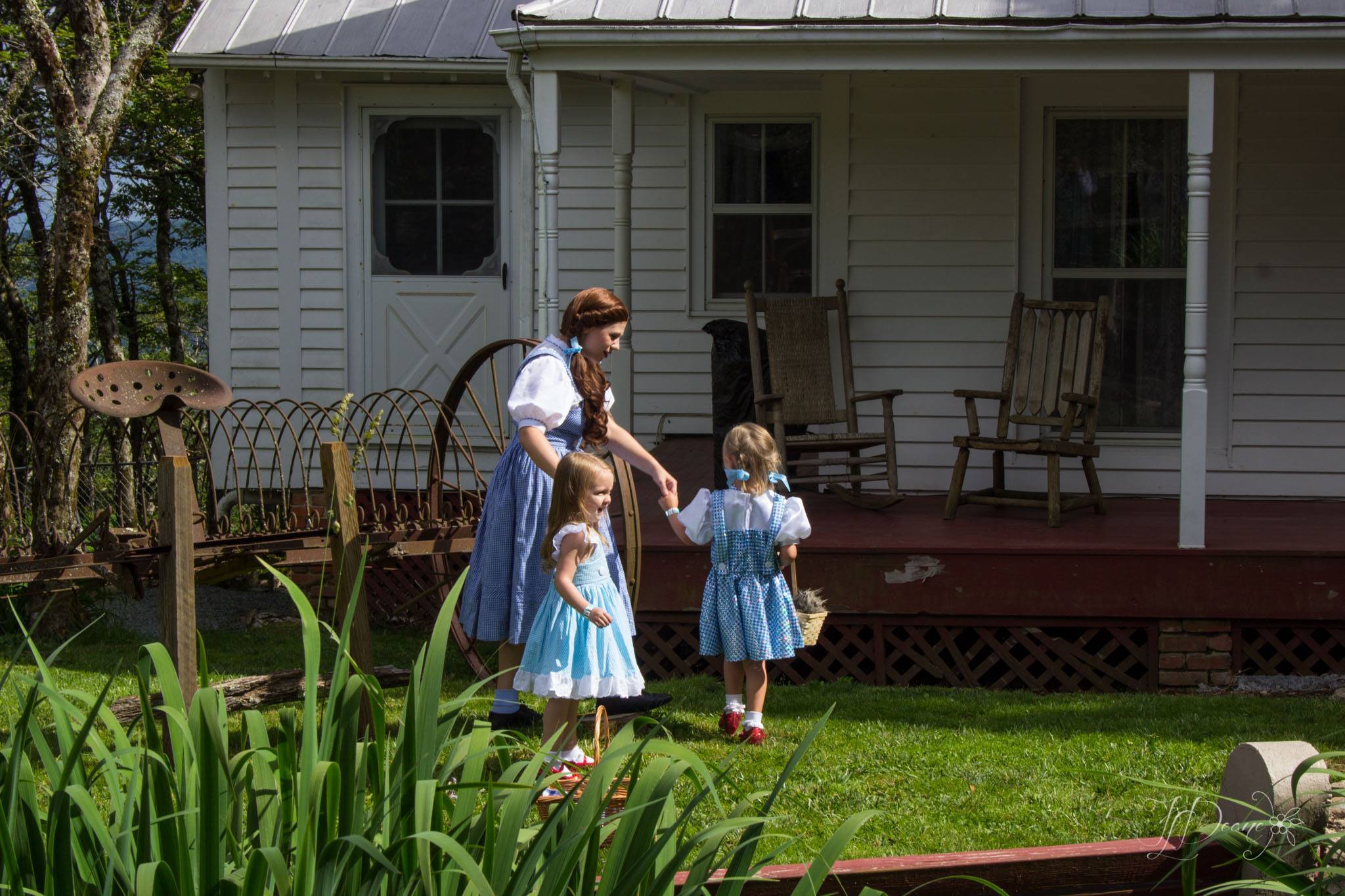 As the sounds of the storm moving in, we walked into the house, and down into the storm shelter, Dorothy ran around looking nervous, and calling out for Aunty Em and Uncle Henry.  She continued to hurry us along, as she saw the storm coming.   She did a great job playing in character.

The house itself is fully decorated, very detailed, and VERY well maintained.  During the Autumn in Oz event, you'll meet Auntie Em inside. 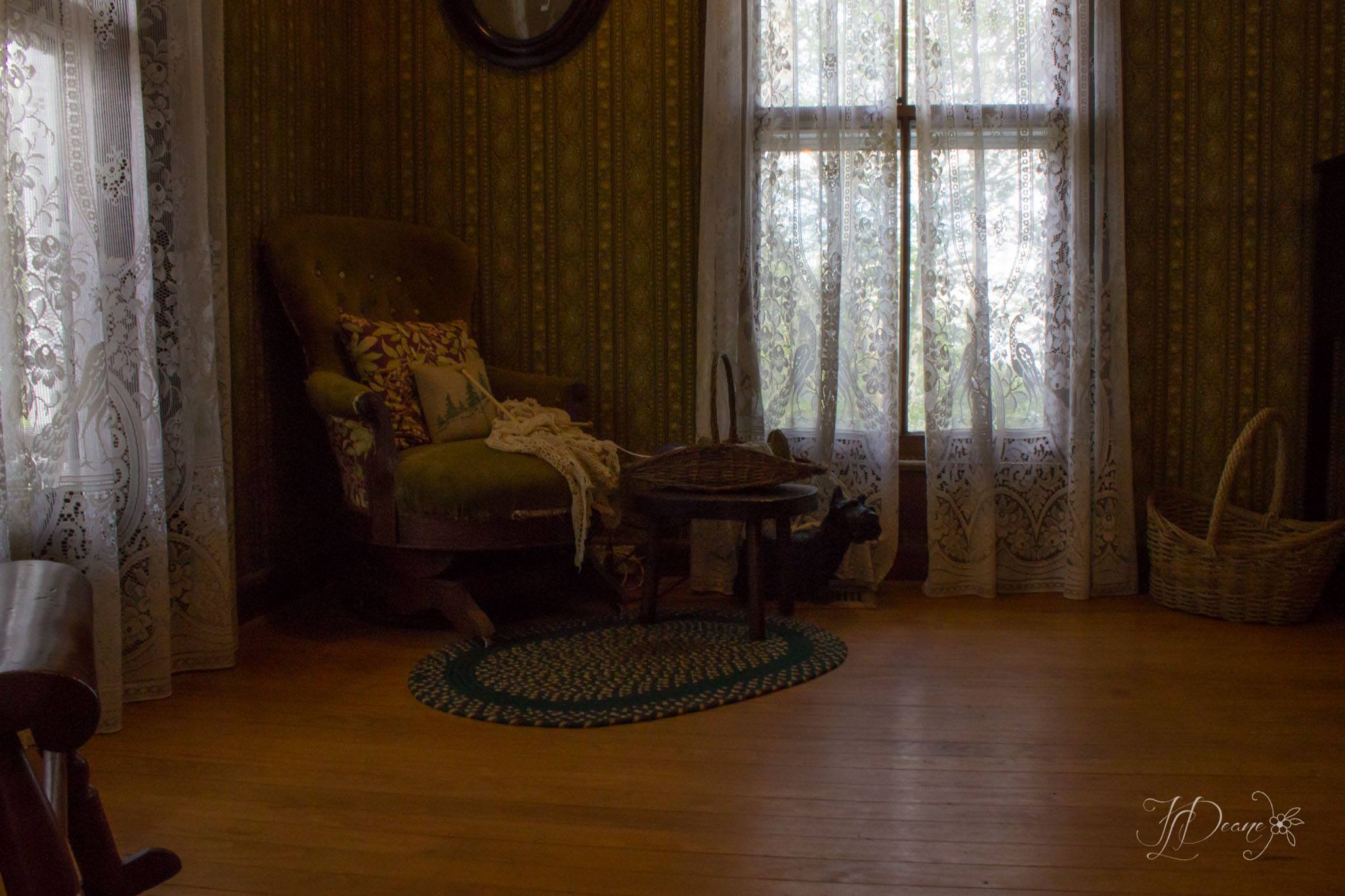 Entering the storm shelter and basement was fun, as it was dark, with lots of black lights and glowing colors all over the walls.   This was of course to simulate us being in the Tornoado.  They even have fans blowing to simulate the wind, and audio playing with storm sounds.

Then suddenly, you appear back in the house again, but this time, it's at a 45 degree angle, and the interior of the home is torn to pieces. 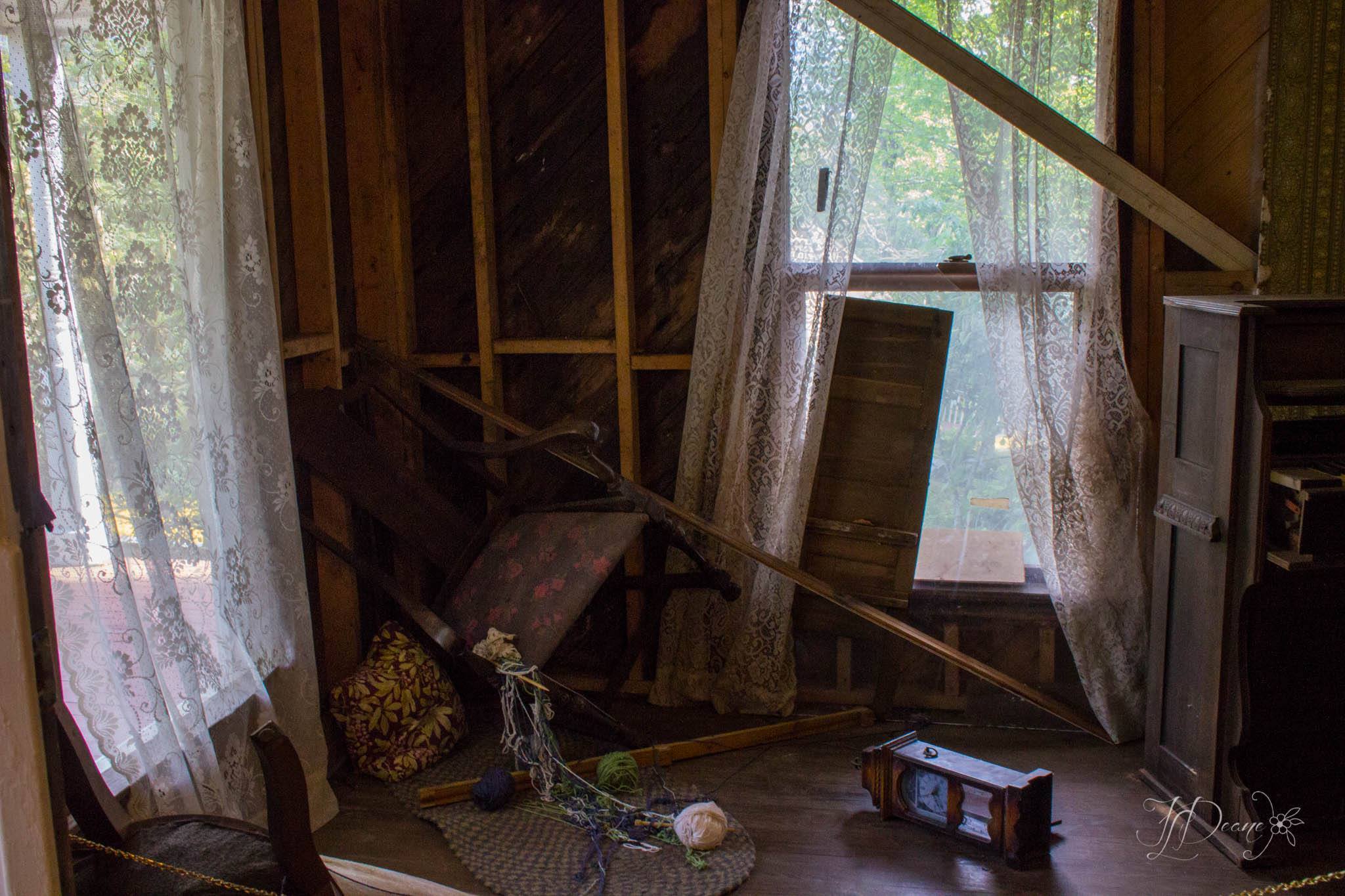 As you exit out onto the front porch, and down the stairs, you find exactly what you would expect ...

During the Autumn in Oz event, the wicked witch will "greet" you on the porch above her dead sister, and interrogate you about who killed her.  The actress we had did a fantastic job, and was really funny with a great evil laugh.

Here she is giving me an evil look for taking her picture!

Of course just down the path, you'll see your first glimpse of the  Yellow Brick road.

Munchkinland and the Yellow Brick Road

The first thing you notice, as you exit the house is the yellow brick road.  It stands in stark contrast to the mountain green.

During the Autumn in Oz event, you'll meet Glenda the Good Witch and various munchkins.

During the Autumn in Oz event, as you  journey down the yellow brick road, you'll met up with the Scarecrow, Tinman, the Cowardly Lion, Evil monkeys, Evil guards, and of course the Wicked Witch. 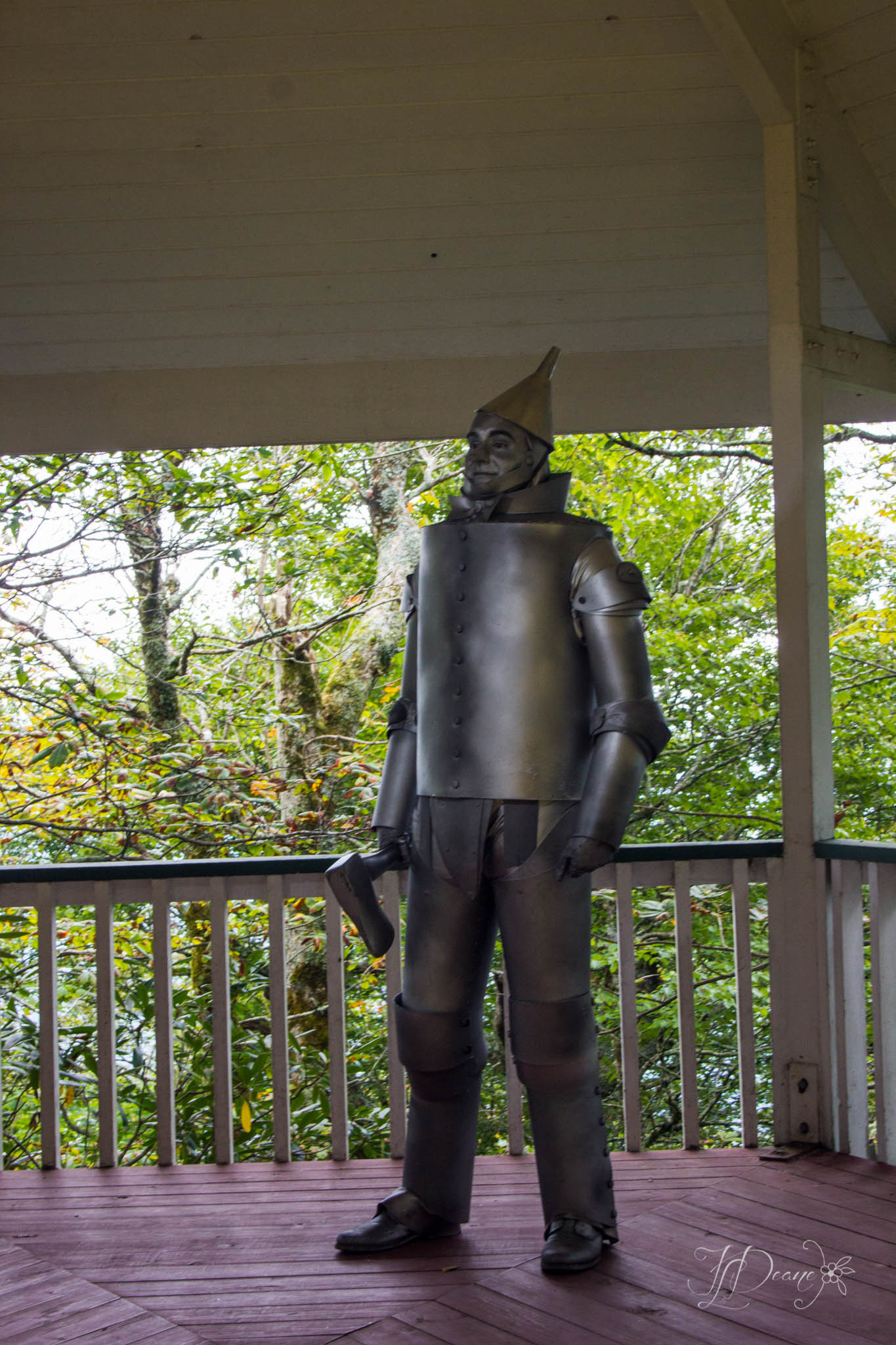 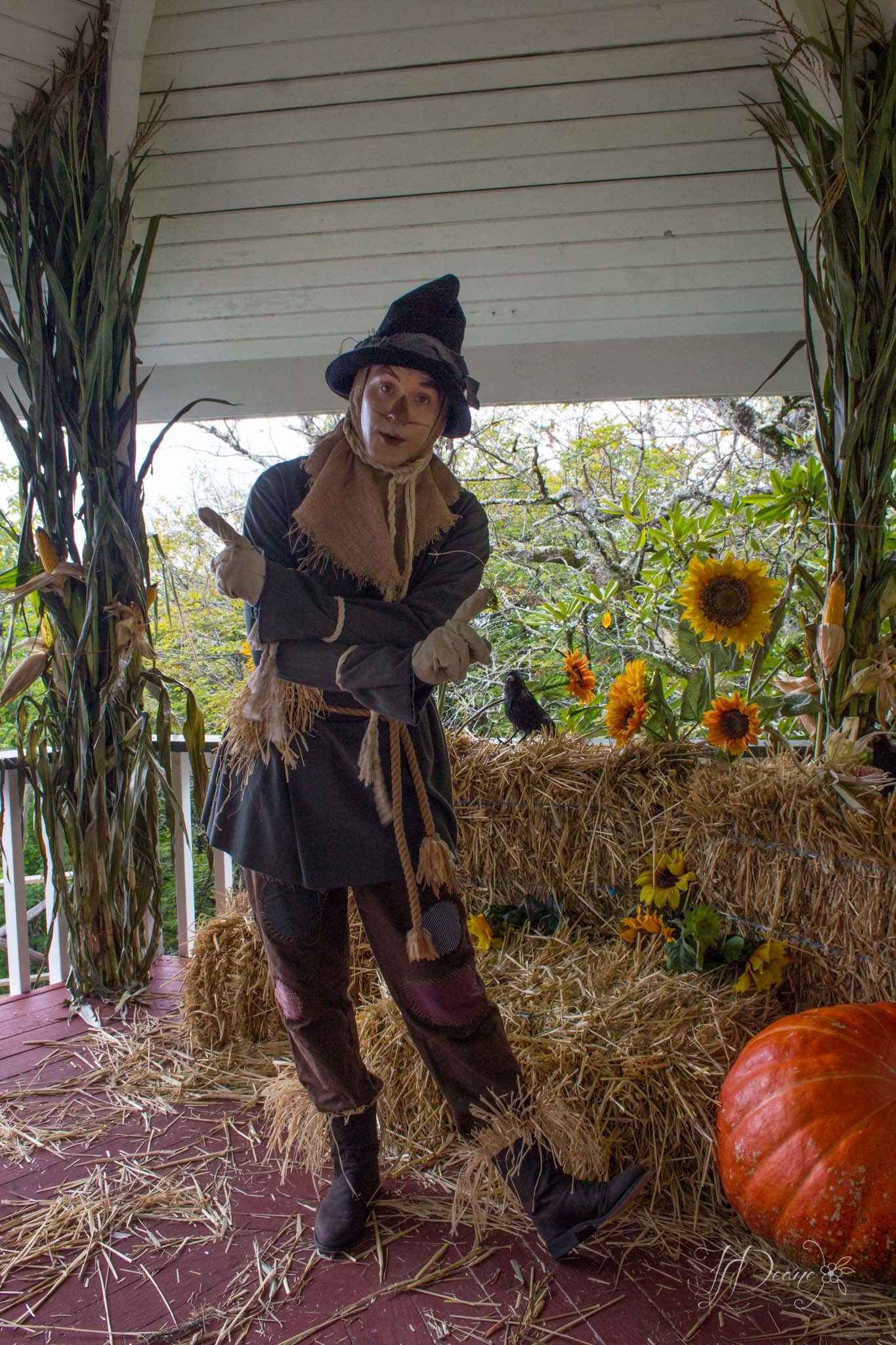 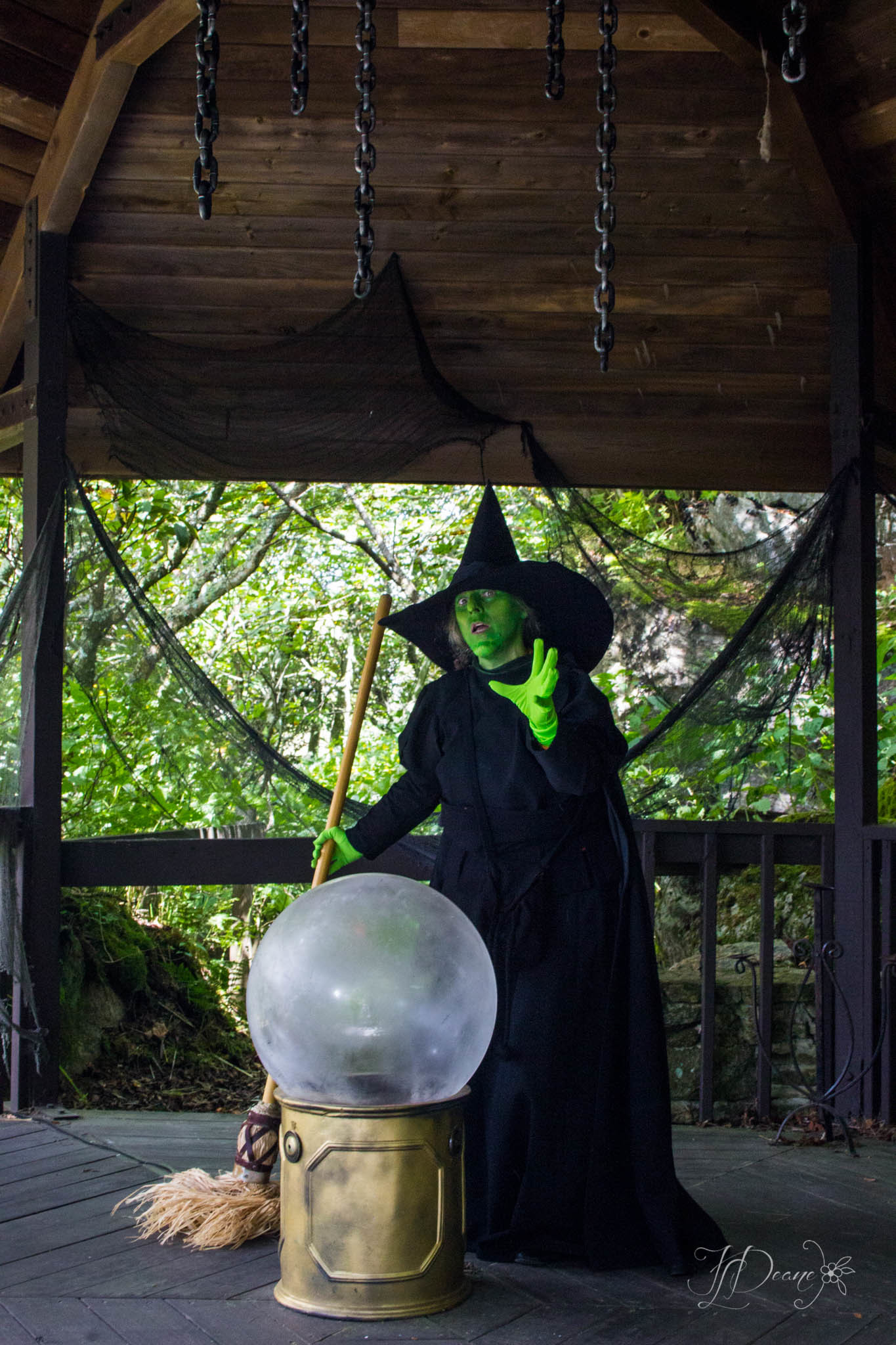 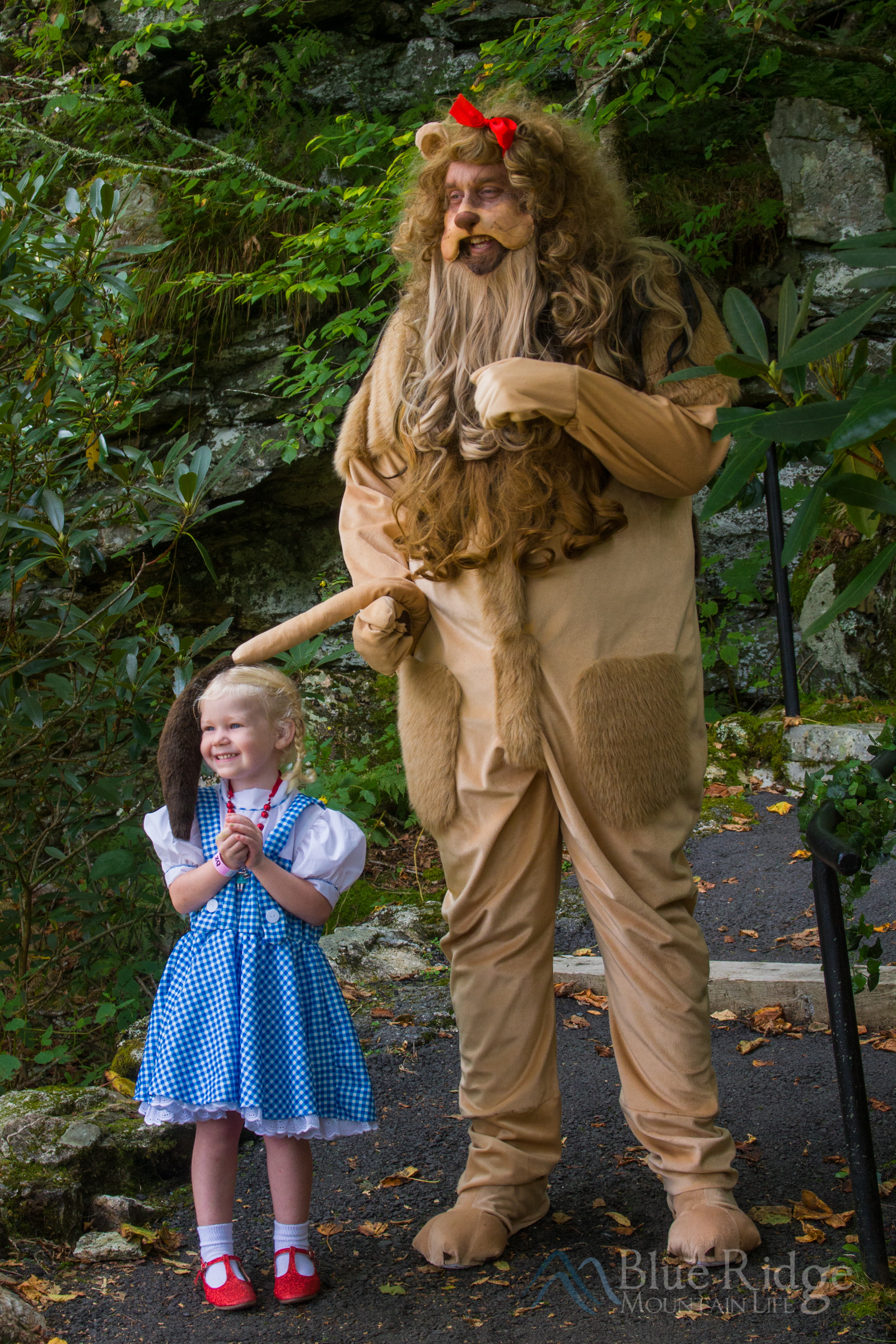 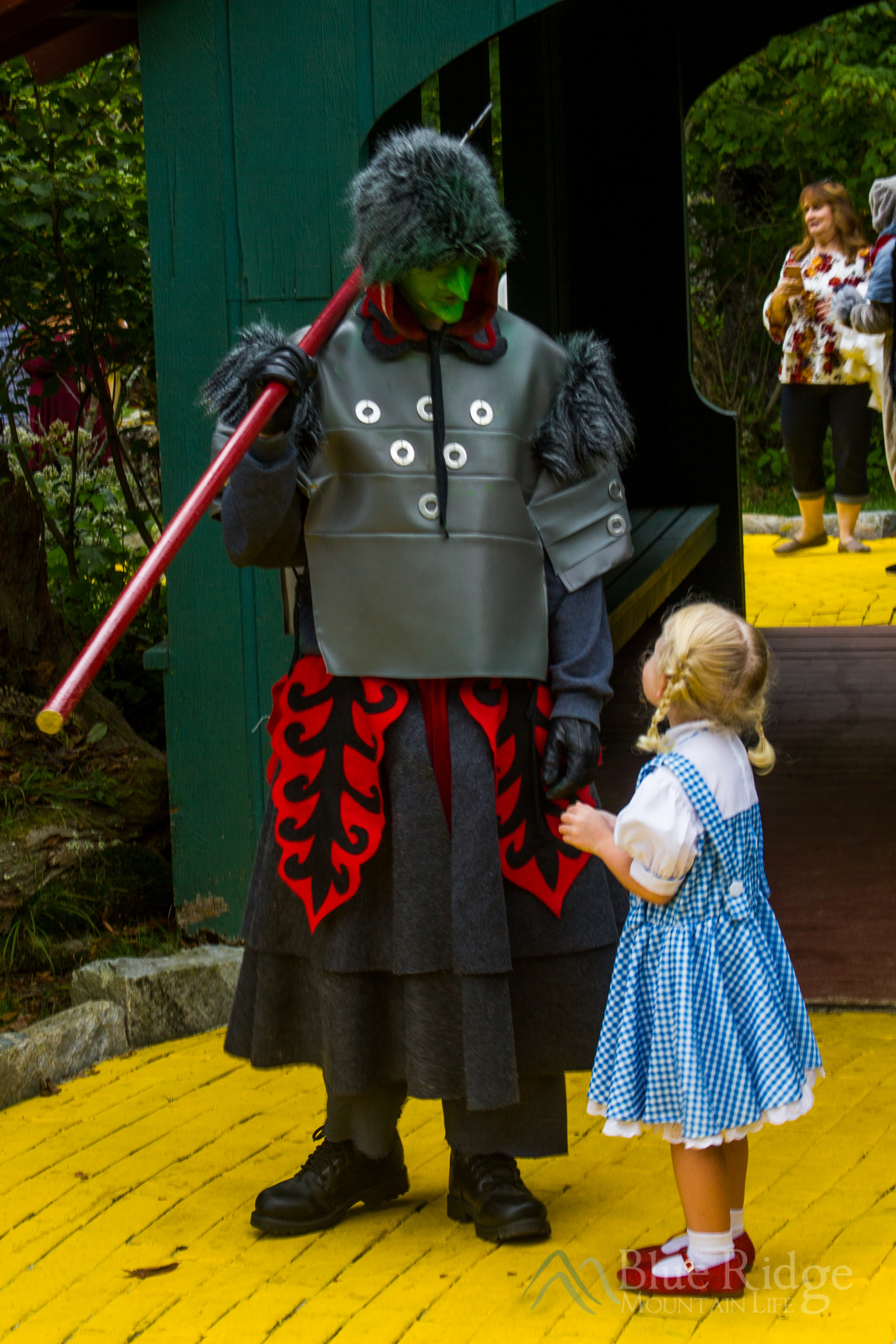 The Park itself is just beautiful, and you can see how the designer went to great efforts to blend the natural mountain setting, into the Oz theme.  In fact, only one tree was removed to make the Land of Oz. 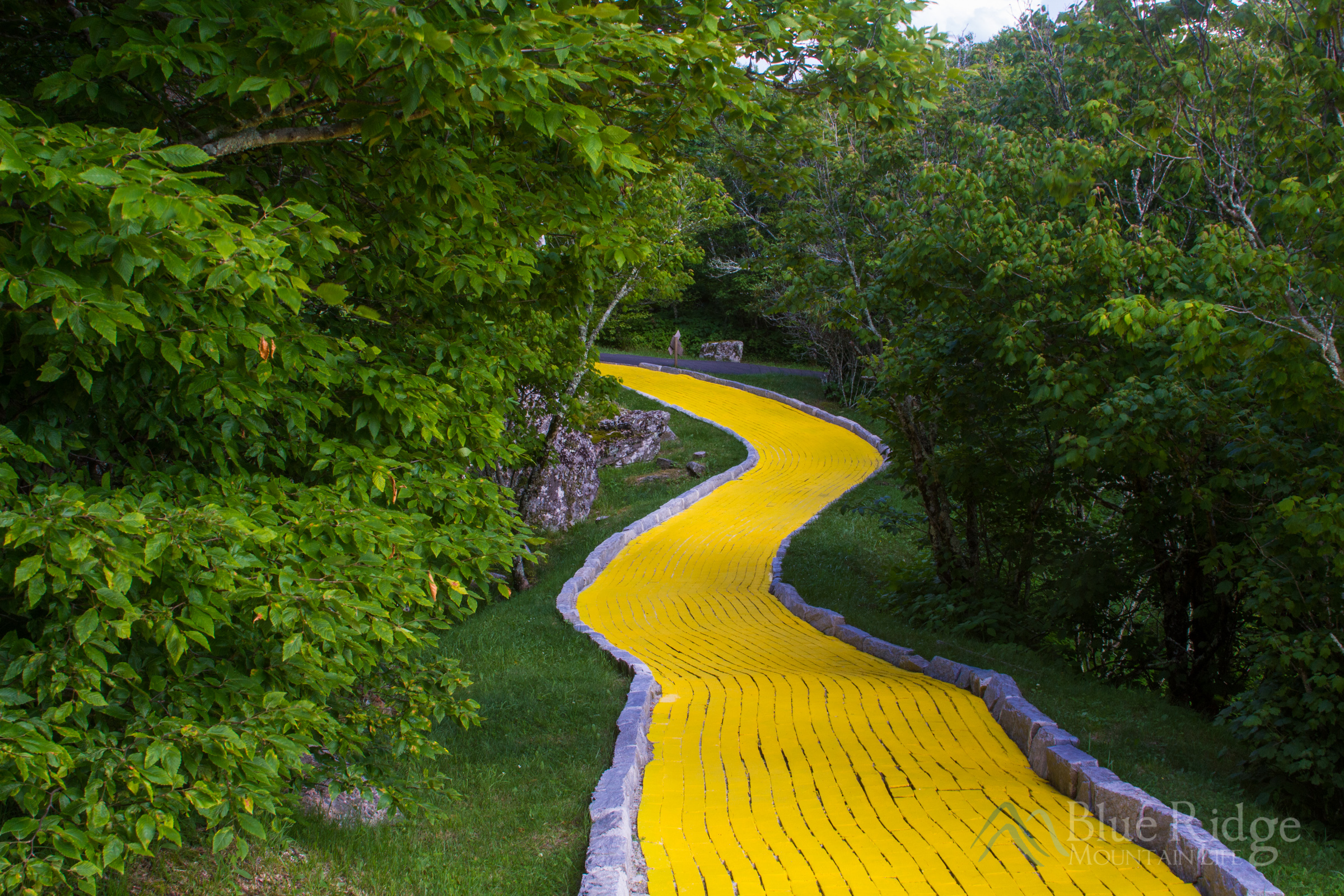 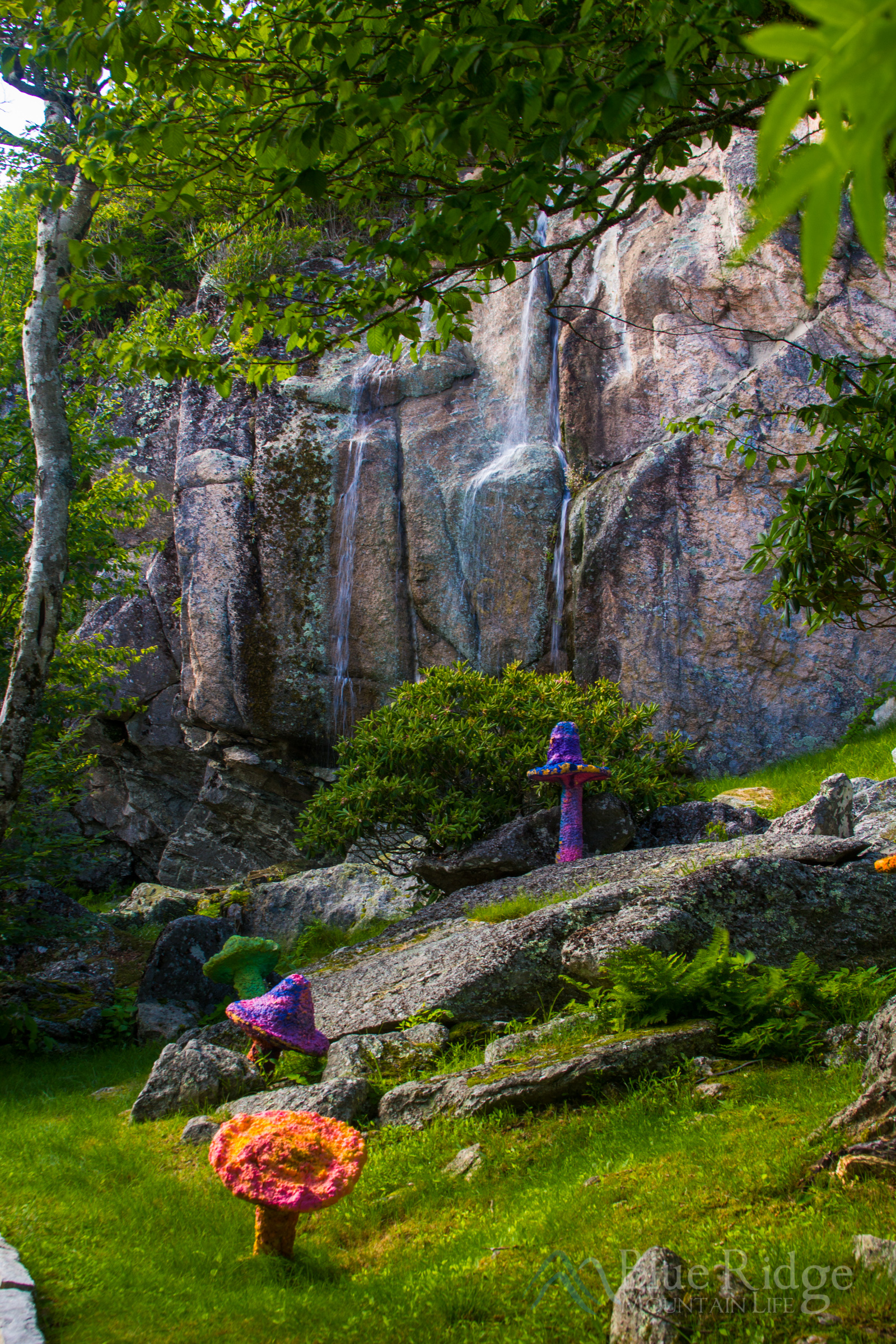 And the scenic views as your travel along the yellow brick road, are breathtaking: 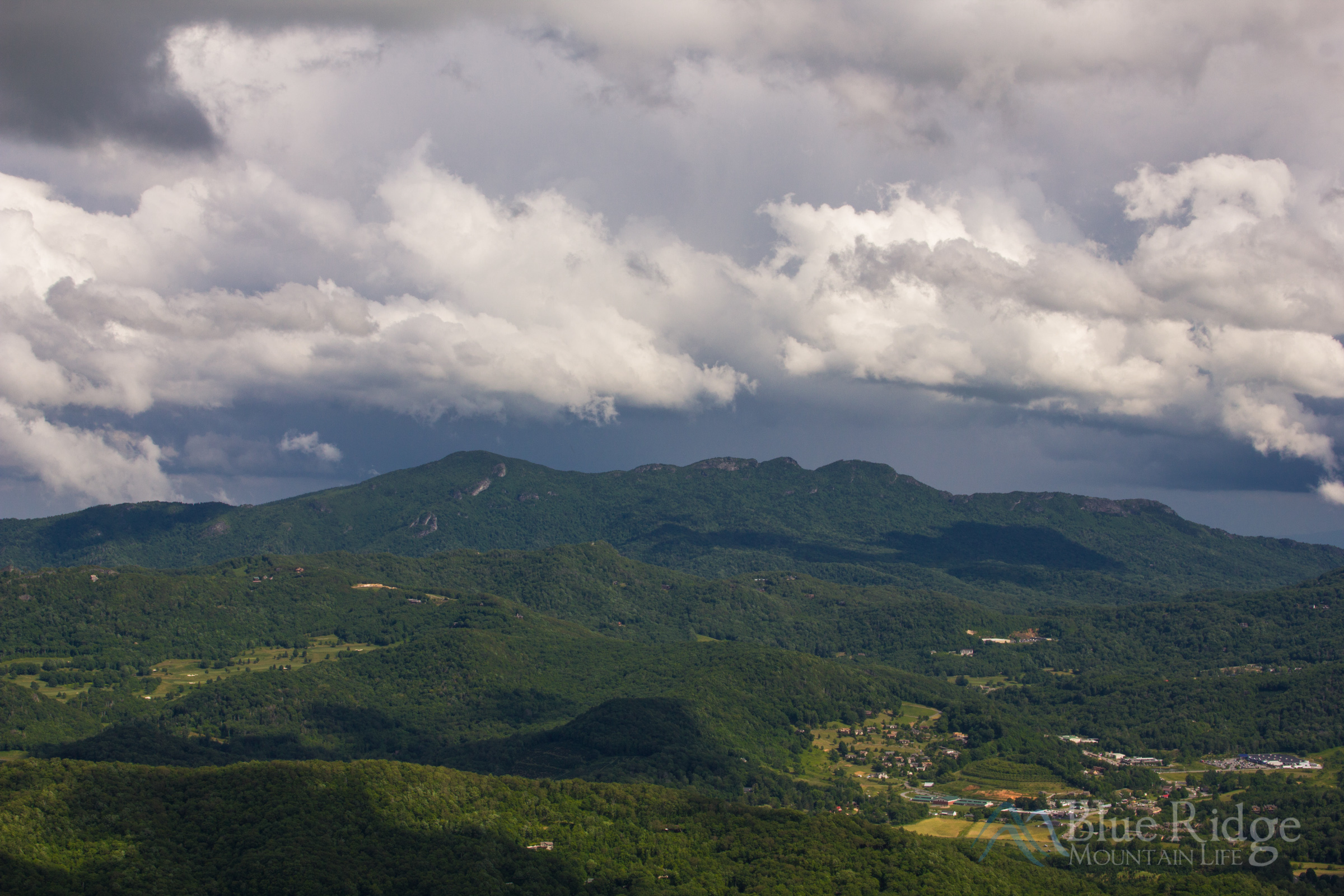 As you round the bend, from the photo above, you are greeted with one of the most beautiful scenes in the park, the yellow brick road, surrounded by red poppies, and the gates to Emerald City in the distance. 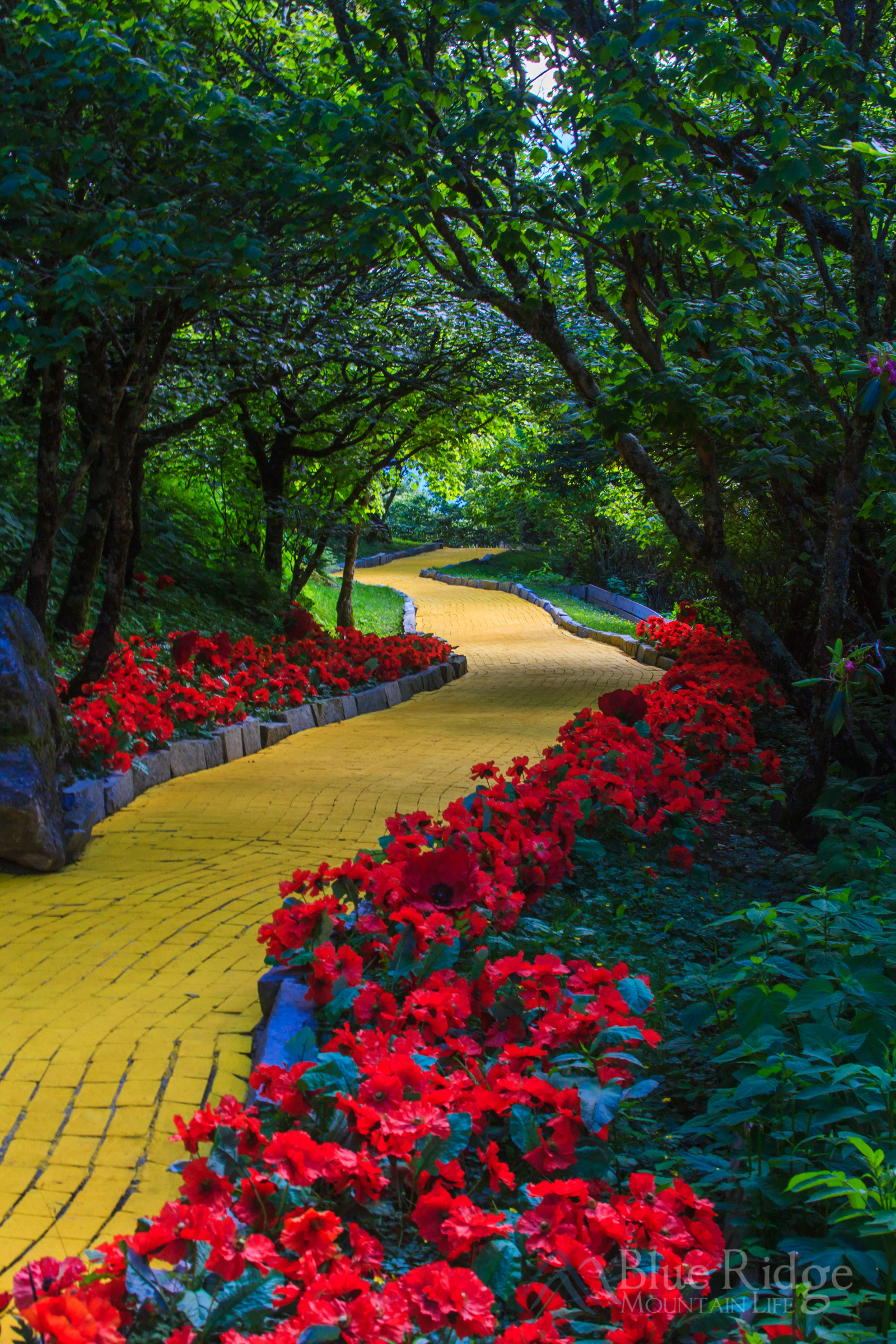 During the Autumn in Oz event, you'll even fall asleep, to be woken by Glenda the Good Witch! 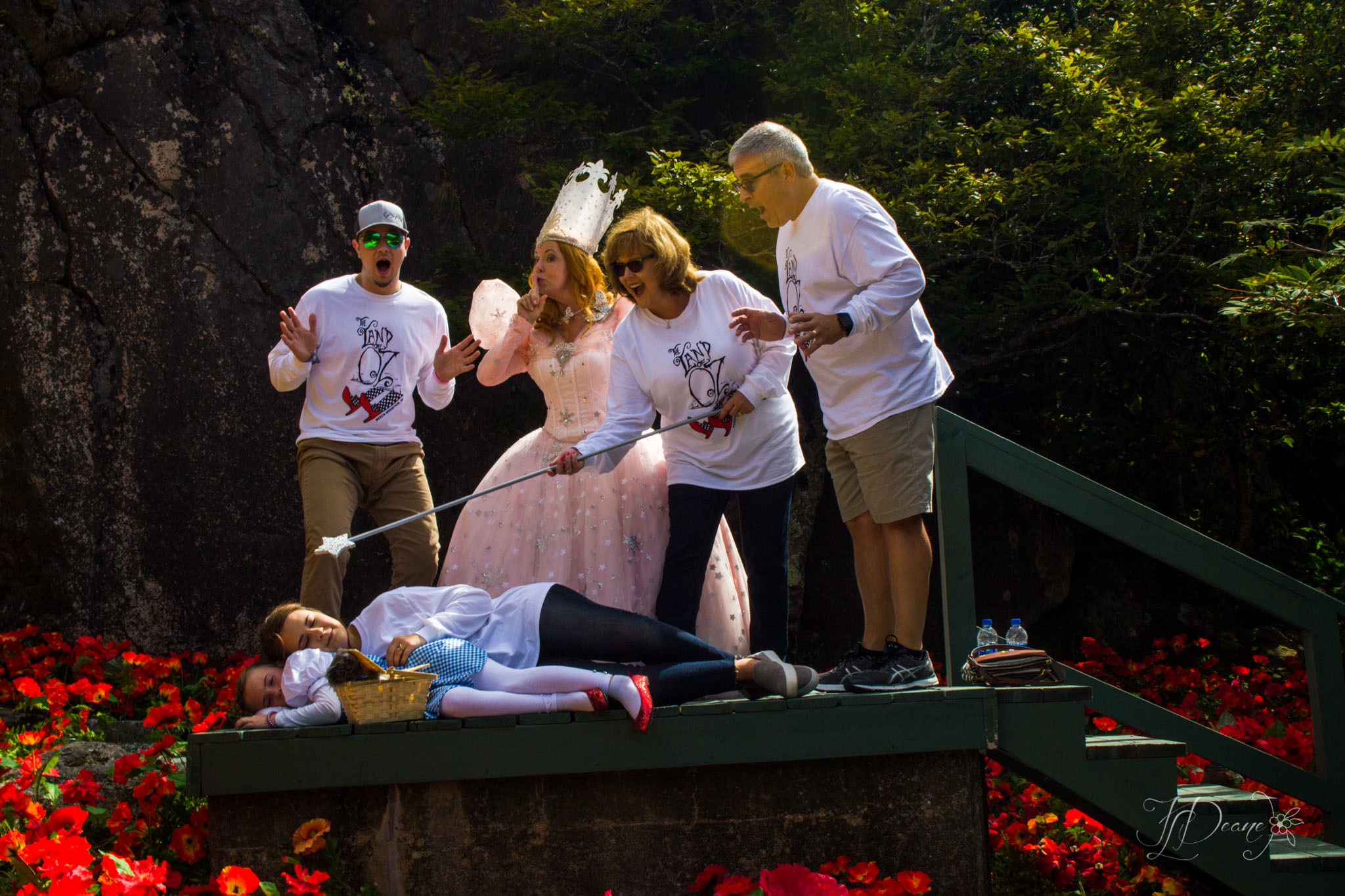 As you pass the poppies, you'll reach the gates to Emerald City.  During the Autumn in Oz event, you can ring the bell and be greeted by the Gate Keeper, who of course tells you the bell is broke and that you should knock! 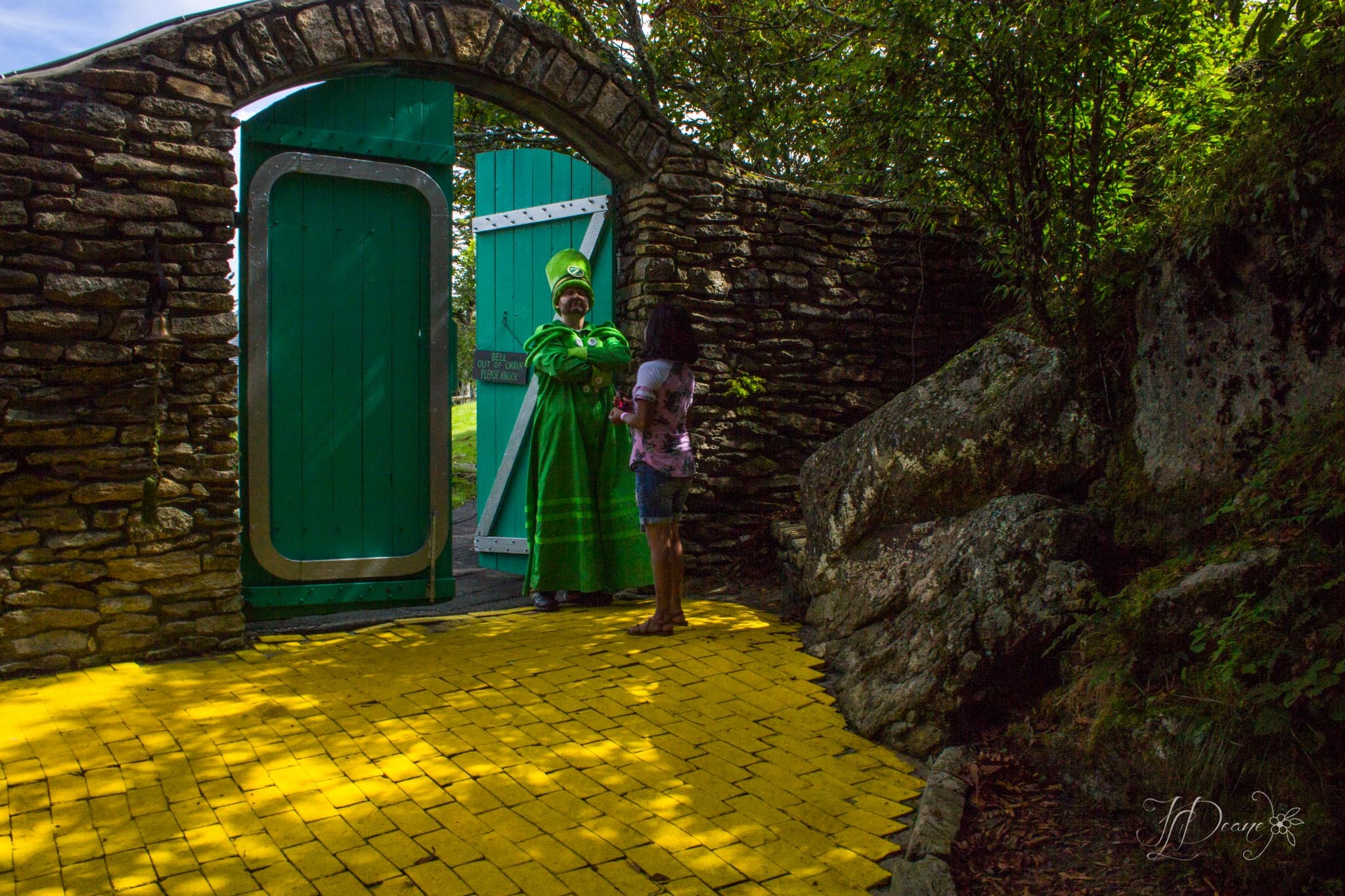 Unfortunately, the original Emerald City doesn't exist anymore, due to a fire that occurred in 1975 (see history below). The area that was Emerald City is now part of the surrounding residential neighborhood.

But During the Autumn in Oz event, a large tent serves as Emerald City.  Inside you'll find shops, food, the famous violet horse, and the final Autumn in Oz event show where you meet the wizard, and he gives the cast members their gifts. 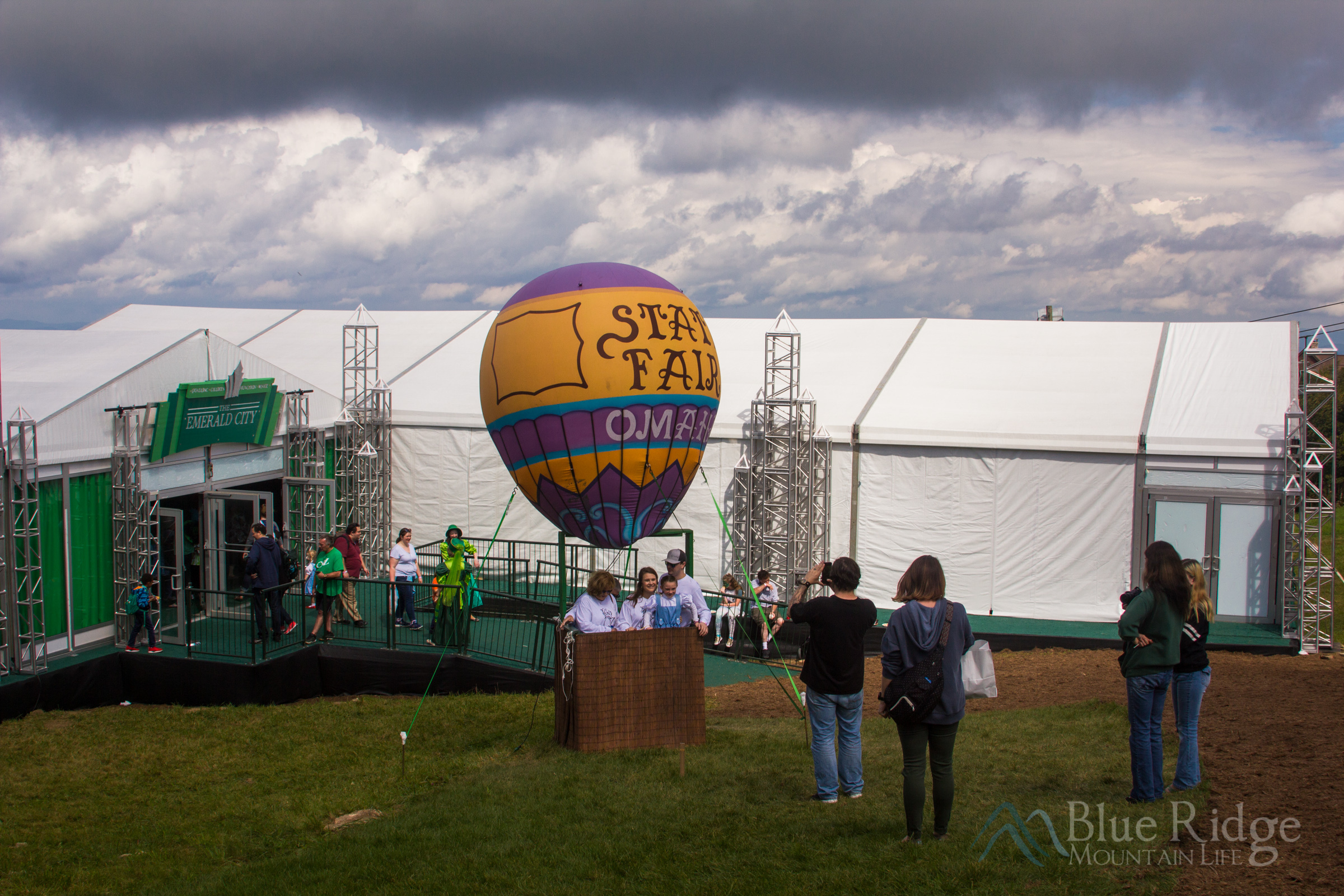 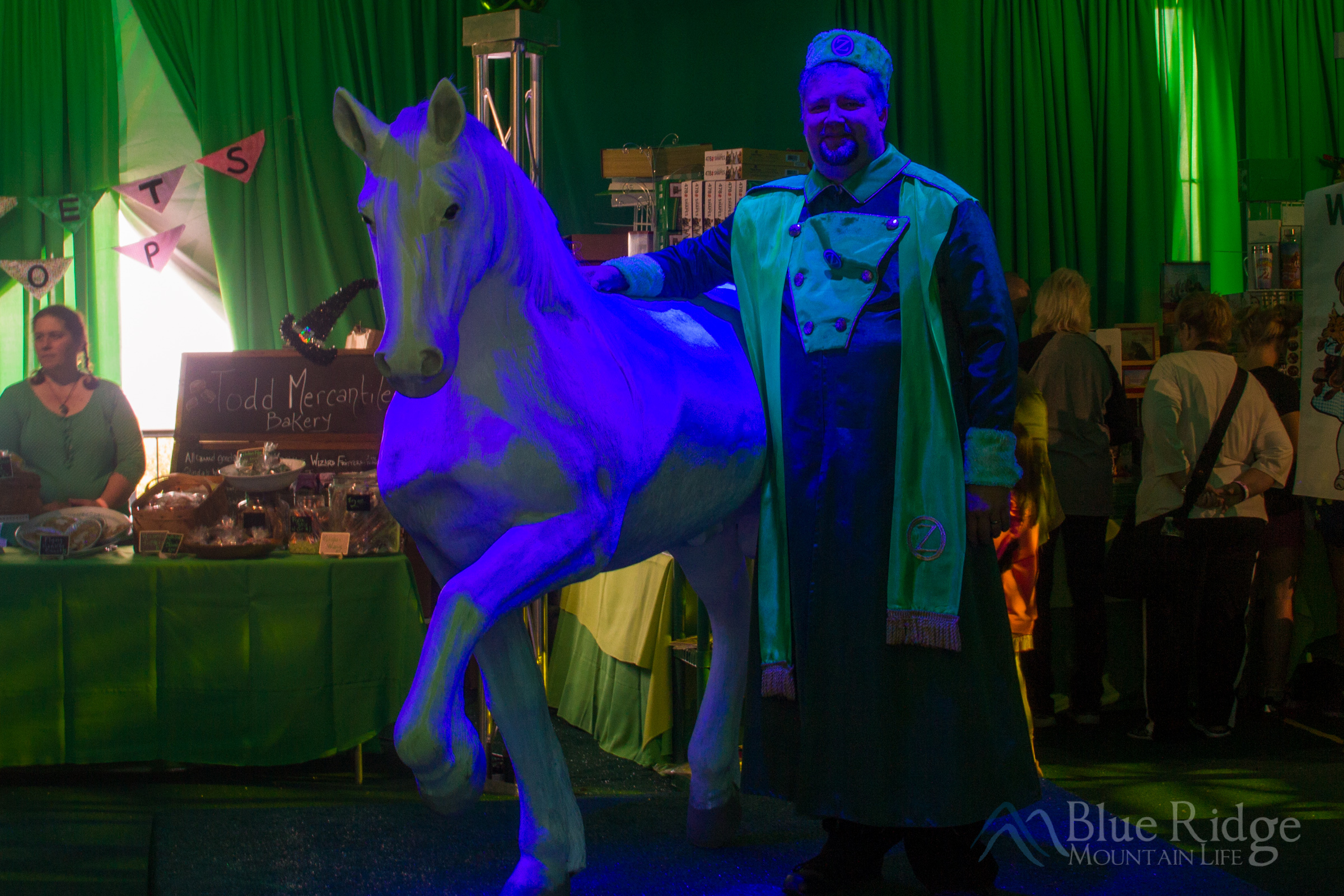 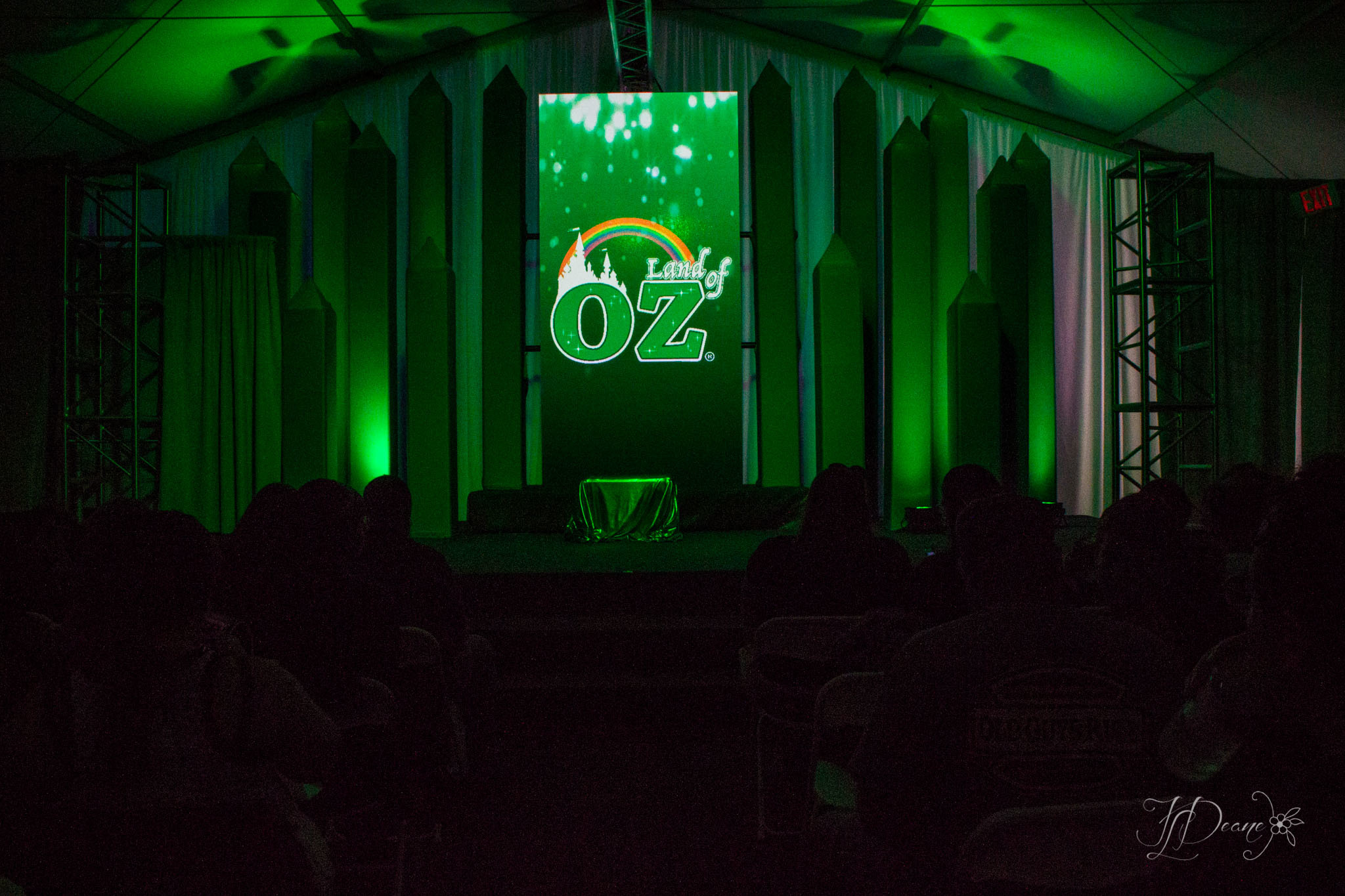 For the Journey with Dorothy Event, you'll meet The Wizard at the end on the other side of the gates, and he'll send you back home to Kansas. 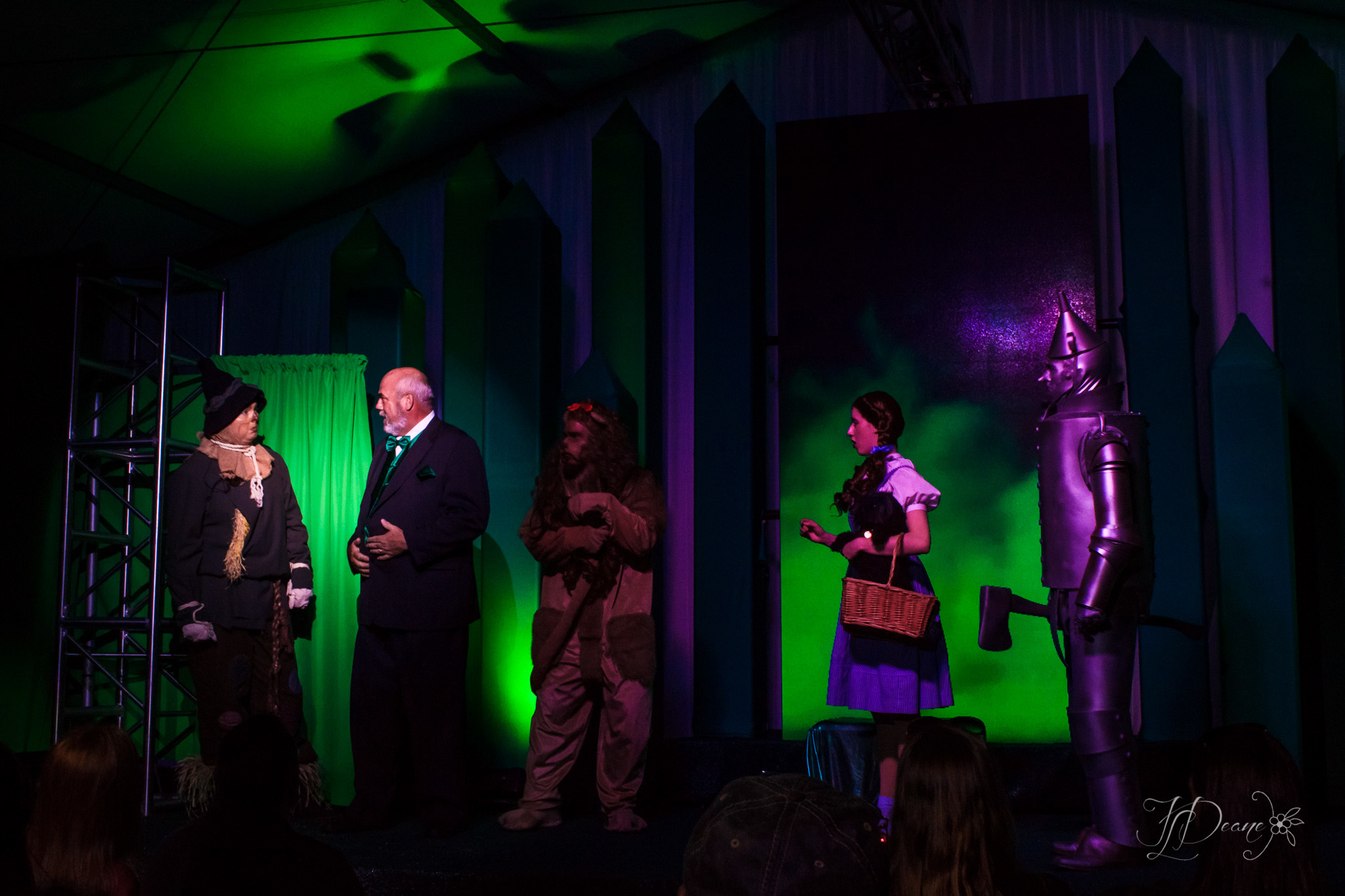 But on the Autumn in Oz event, you'll venture into the Emerald City, and sit down for a 15 minute show where the cast meets the Wizard, receives their rewards, and sadly Dorothy returns home.   The show is VERY well done. 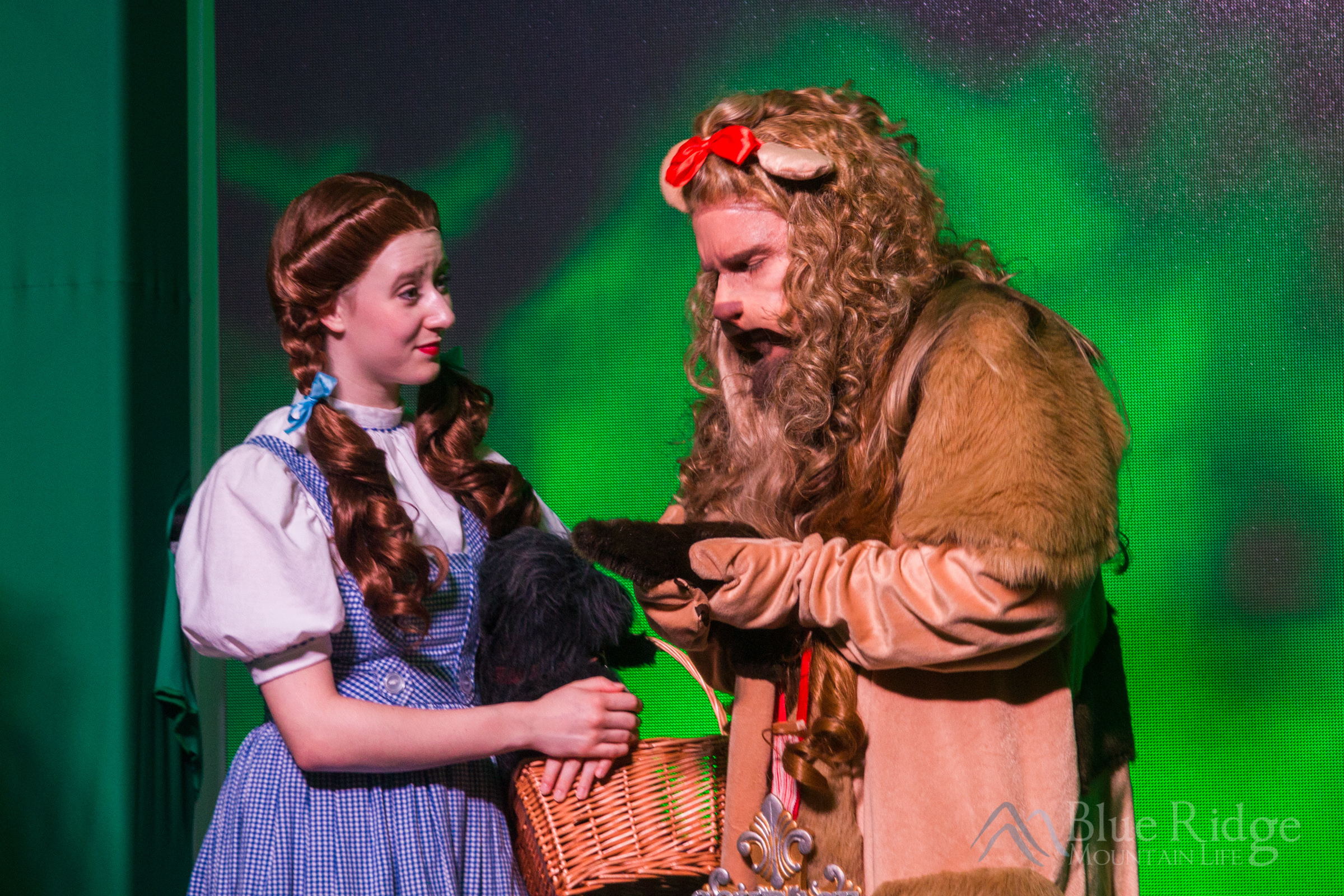 A Brief History of the Land of Oz

In 1965, Carolina Carribean Company (CCC), owned by Grover and Harry Robbins, were looking for ways to fully utilize their latest acquisition, Beech Mountain,  In particular, they wanted to find ways to bring people to Beech Mountain year round, and not just during the winter during ski season.

The pair brought in Charlotte designerJack Pentas, who surveyed the top of Beech Mountain, and had an idea .. The Beech trees looked very much like the Apple Trees in the Wizard of Oz.

The Land of Oz opened on June 15, 1970.  The park took 2 years to complete, at a cost of $5 million dollars (about $34 million in todays dollars).  During it's first year alone, over 400,000 people walked the yellow brick road.  The park was an overnight success, and the most successful them park on the east coast.

Unfortunatly as soon as the park saw it's huge success, problems began to occur, that ultimately doomed the theme park to failure.

Grover Robbins, who was well known as the "the passion" behind the Land of Oz, died  of cancer just prior to the park opening in 1970.   Instead of profits being funneled back into Oz for maintenance and expansion, the money was used for other CCC endeavors.

Additionally, the gas crisis of the early 70s, caused many would be visitors to not attend, hurting park attendance and profits.

In 1975, one of the major resorts owned by CCC failed, causing CCC to go into bankruptcy.  On December 28th, 1975, a fire was set at Emerald City, causing significant damage.  There is some speculation, the fires were caused by disgruntled employees, but that has not been proven.  After the fire, a number of collectible items and costumes were stolen, including the Judy Garland's original dress from the movie.

In 1976, a new management company took over.  The fire damage was repaired, new buildings created, and the park opened for the 1976 season.  Sadly, attendance was was poor.

Many changes were made to reduce cost, including less extensive costumes, replacement of live animals, with animatronic versions, changes to shows, and many others.

Over the next 5 years, the park suffered greatly from lack of maintenance, and no updates.  Many of the structures, and the yellow brick road, showed signs of age, and much needed repairs.  To repair Oz and update it, it would cost the new company $3.5 million.  They closed the park in 1980. 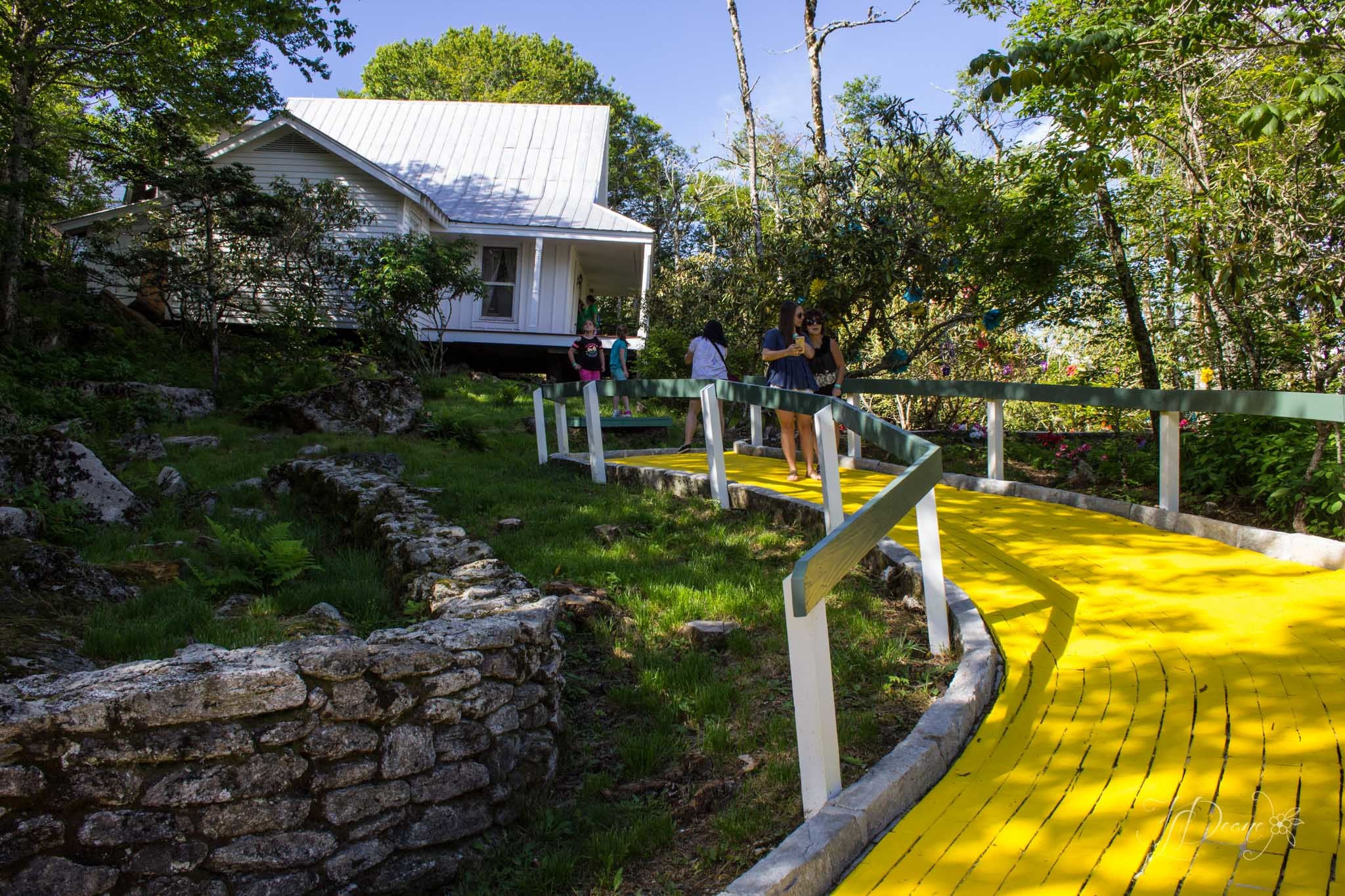 In the 1990s, Emerald Mountain, Inc. bought the property, and began construction on a high-end gated community surrounding the park.  This proved to save the park.  The park did lay abandoned for years, but in 1994 there was reunion of park staff, and the idea of Autumn in Oz took shape.

Today, the park opens for two main events, A Journey with Dorothy in June, and Autumn in OZ in September.  The rumor is a 3rd event will be done this year, possible a Halloween theme in October.

Visitor Tips for the Land of Oz

When visiting the Land of Oz events, here are some tips that will make your visit for enjoyable

Directions to the Land of Oz

Just head over the rainbow ...

Forgive us ... we couldn't resist!

The Land of Oz is located in the town of Beech Mountain, NC.  The town is pretty small, and navigating around is easy.   There are very visible signs for the Land of OZ and associated parking.

We thoroughly enjoyed our visit to the Land of Oz, and while there also enjoyed seeing Beech Mountain, Banner Elk, and Boone.  We will be attending Autumn at Oz as well, and will update this article with more information, on our return.

If you haven't visited the Land of Oz, this is definitely a trip you'll want to add to your bucket list! 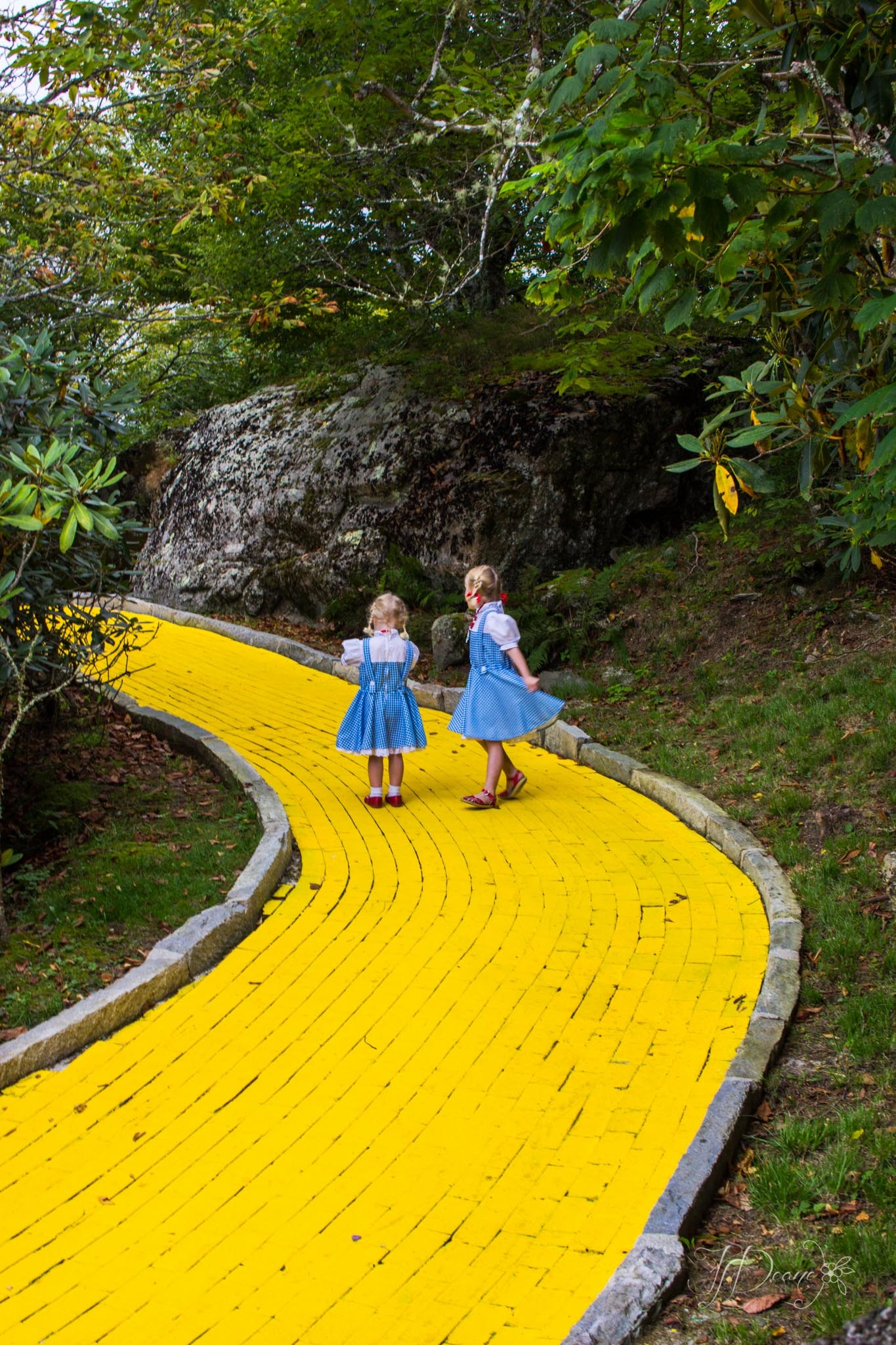