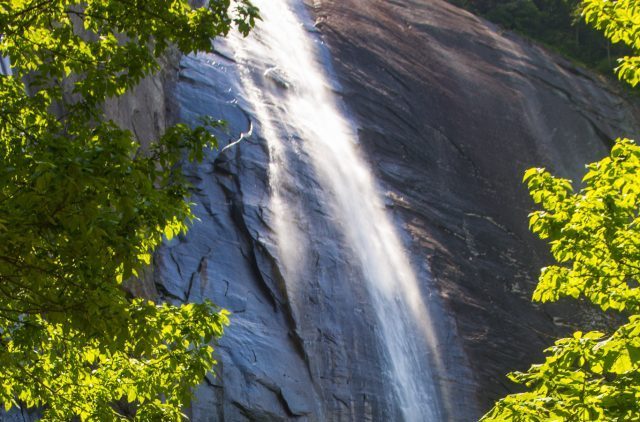 This 1.5 mile roundtrip and easy – moderate hike, leads you through the dense woods below the high cliff faces of Chimney Rock, to the base of Hickory Nut Falls.  At the base, you’ll find picnic tables, a large observation deck, and a pool of water deep enough to wade in.

Hickory Nut Falls is one of the “must see” attractions at Chimney Rock, and often draws a large crowd, especially in the summer. 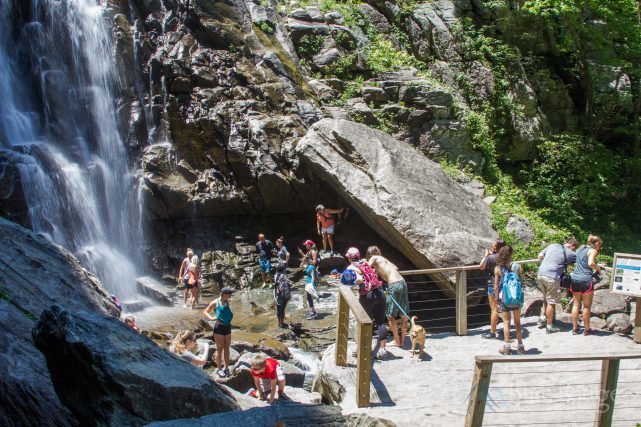 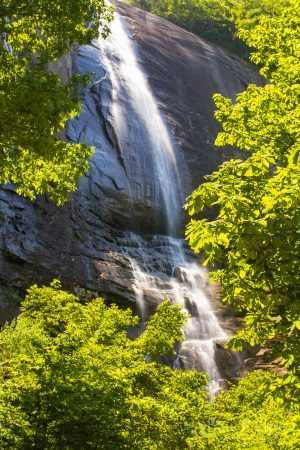 Hickory Nut Falls from the Trail

Hickory Nut Falls is also somewhat of a movie star, as it was featured in the blockbuster movie, Last of the Mohicans.  In fact, the last 17 minutes of the movie were filmed in Chimney Rock State Park, both at the top of Hickory Nut Falls, and along the old Cliff Trail that used to take you there.  Sadly the trail is not longer open.

The climactic fight scene at the end of the movie was filmed just feet from the top edge of Hickory Nut Falls, and Hickory Nut Gorge is clearly visible in the background. 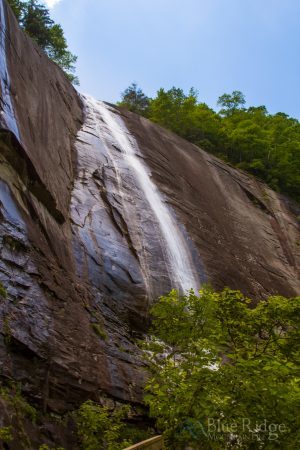 Hickory Nut Falls, from the trail

As a result, you’ll have to walk down to the bottom of the parking lot, and around the turn and down the road a bit to the trailhead, which is clearly visible.  There is no parking around the trailhead itself.  Parking is only available in the main parking lot.

The trail takes you through the dense forest below the cliffs of Chimney top.  If you look up through the tree canopy, you’ll see the cliffs rising high above you.  The trail makes a gradual include up to the base of Hickory Nut Falls.

As you hike, you’ll see a number of interesting geological features, and signs with educational information about the various features.  If you pay attention, you’ll also see many different types of birds, and wildflowers as well.

Dogs are welcome in the park in general, and also on this trail.  They just need to be on a leash at all times.

Here is a video I took at the falls during our recent visit (May 2017).  My apologies for the background noise, there were lots of people.