Disclosure: We are part of the Tweetsie Railroad Enthusiasts Program, and tickets were provided to us for our visit by Tweetsie Railroad; however, all opinions and information are our own and we were not asked in anyway to influence our review/article.

While there you can ride behind both historic steam locomotives, #12 and #190, visit the railroad memorabilia display, tour the locomotive shops, and ride the after hours photo run.   On Sunday, Tweetsie runs the trains in a double header formation, with both #12 and #190 pulling the train rides.  This is only done on Railroad Heritage weekend.

Here is our video from Railroad Heritage Weekend 2022 at Tweetsie Railroad.   There were some amazing video and photo opportunities, and we highlight our favorites in this video.

Railroad Heritage Weekend is at the end of August east year.  Specific dates will be announced on the Tweetsie Railroad website when their new operating season begins.

The event is over two days, a Saturday and Sunday, and while for the most part the days are similar, there are a few differences that we cover below in the special events section.

Railroad Heritage Weekend and all of the associated special events are part of the normal admission price for Tweetsie Railroad.

Since Railroad Heritage Weekend is two days of events, you will need to pay regular Tweetsie admission to attend both days.   However, there are two options to save you some money if that isn't an option:

You can purchase normal tickets and special event tickets on the Tweetsie website. 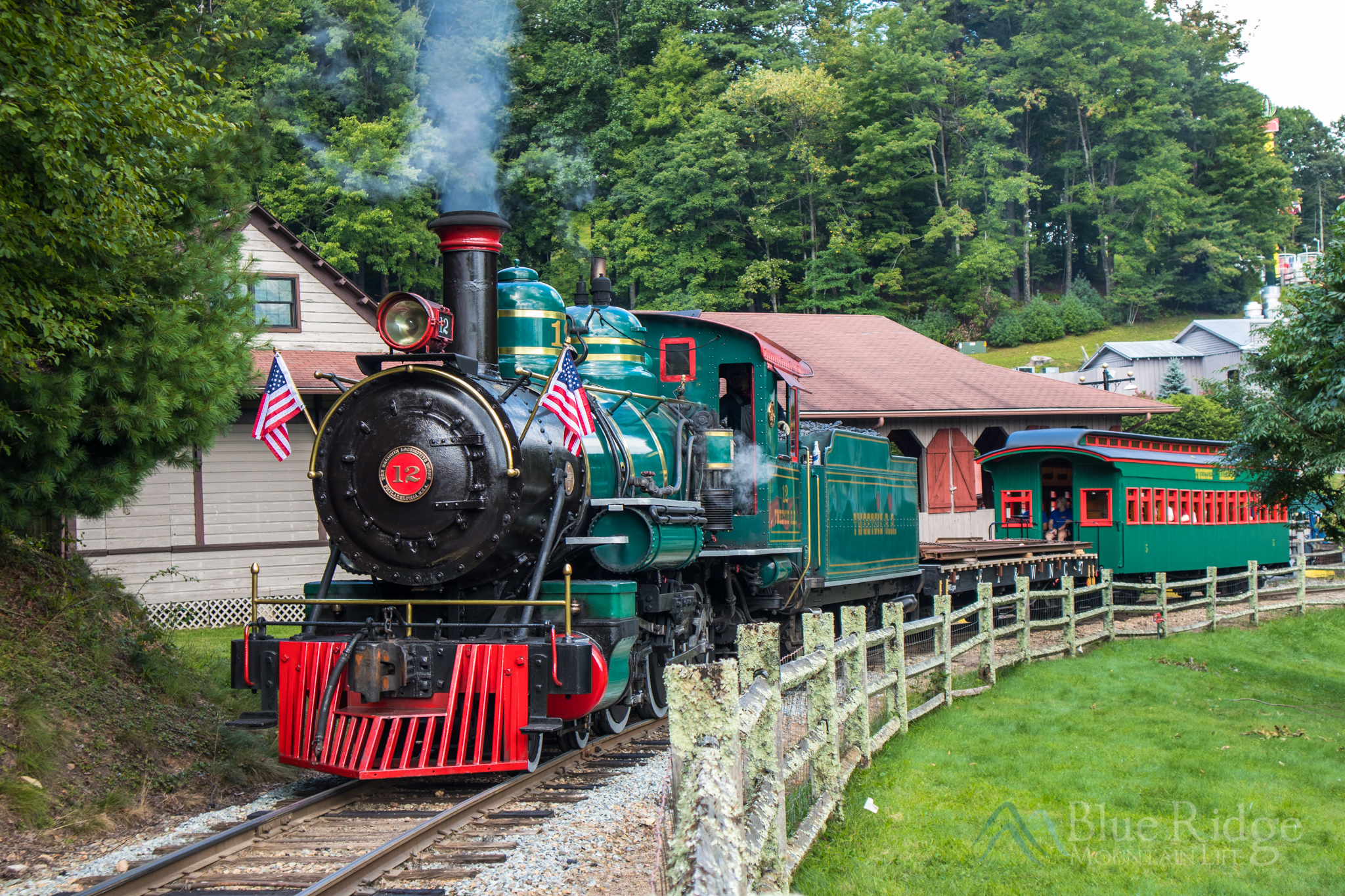 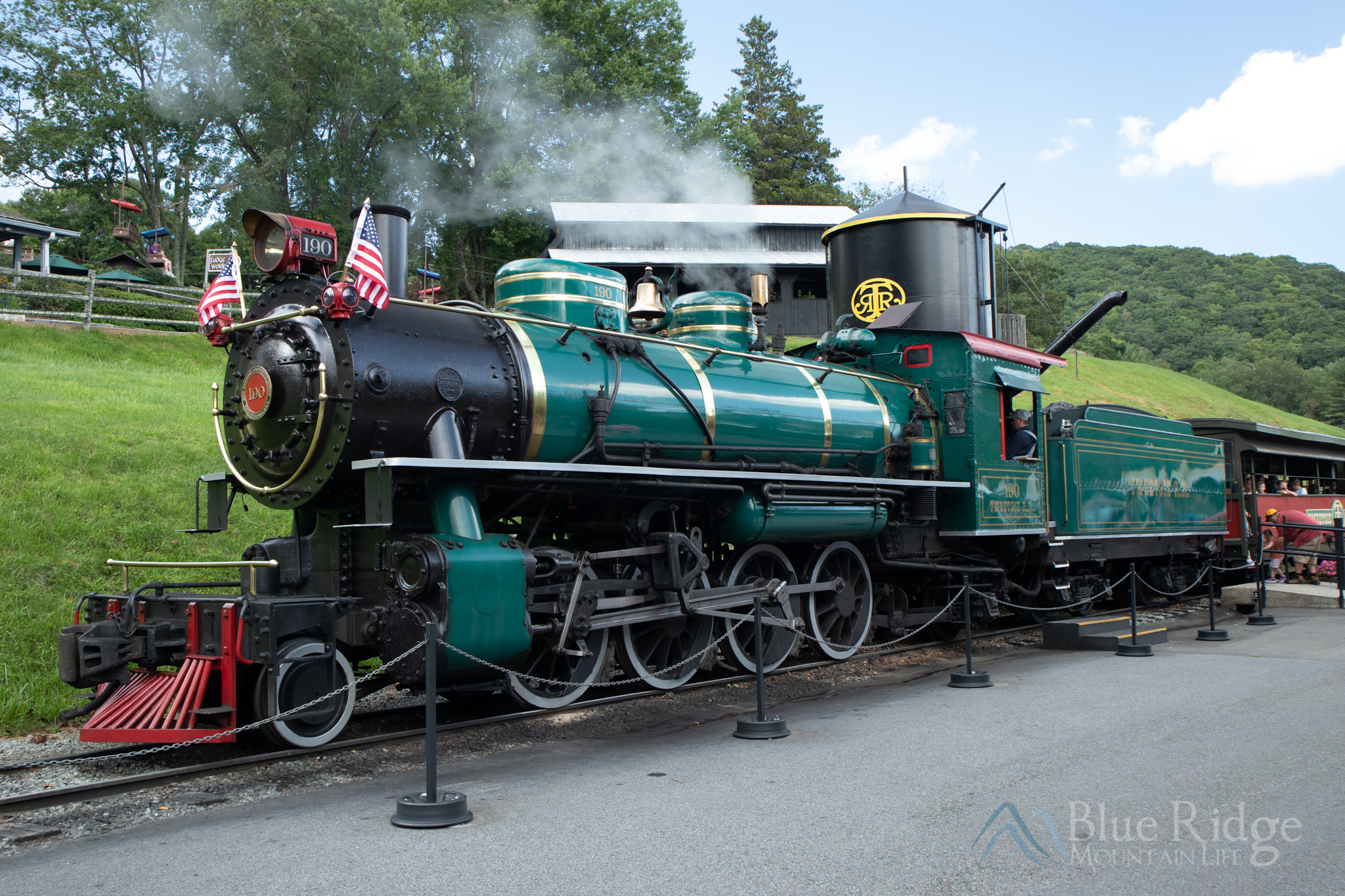 This was our first visit to Tweetsie Railroad Heritage Weekend, and as a huge railfan myself (Larry), I was really looking forward to it.  Even Jenn, who isn't a huge train fan really enjoyed our visit.  I was really kicking myself for not attending this event before!

We visited on Saturday, August 27th.  We had planned to spend both days at Tweetsie, but Tweetsie surprised us with a rare double header evening photo special. Since we got all the footage we wanted on Saturday, including the Doubleheader, we elected to spend some time exploring the area around Blowing Rock NC on Sunday.

We arrived shortly after the park opened, and spent time taking photos and video of engines #190 and #12 putting on a real show. 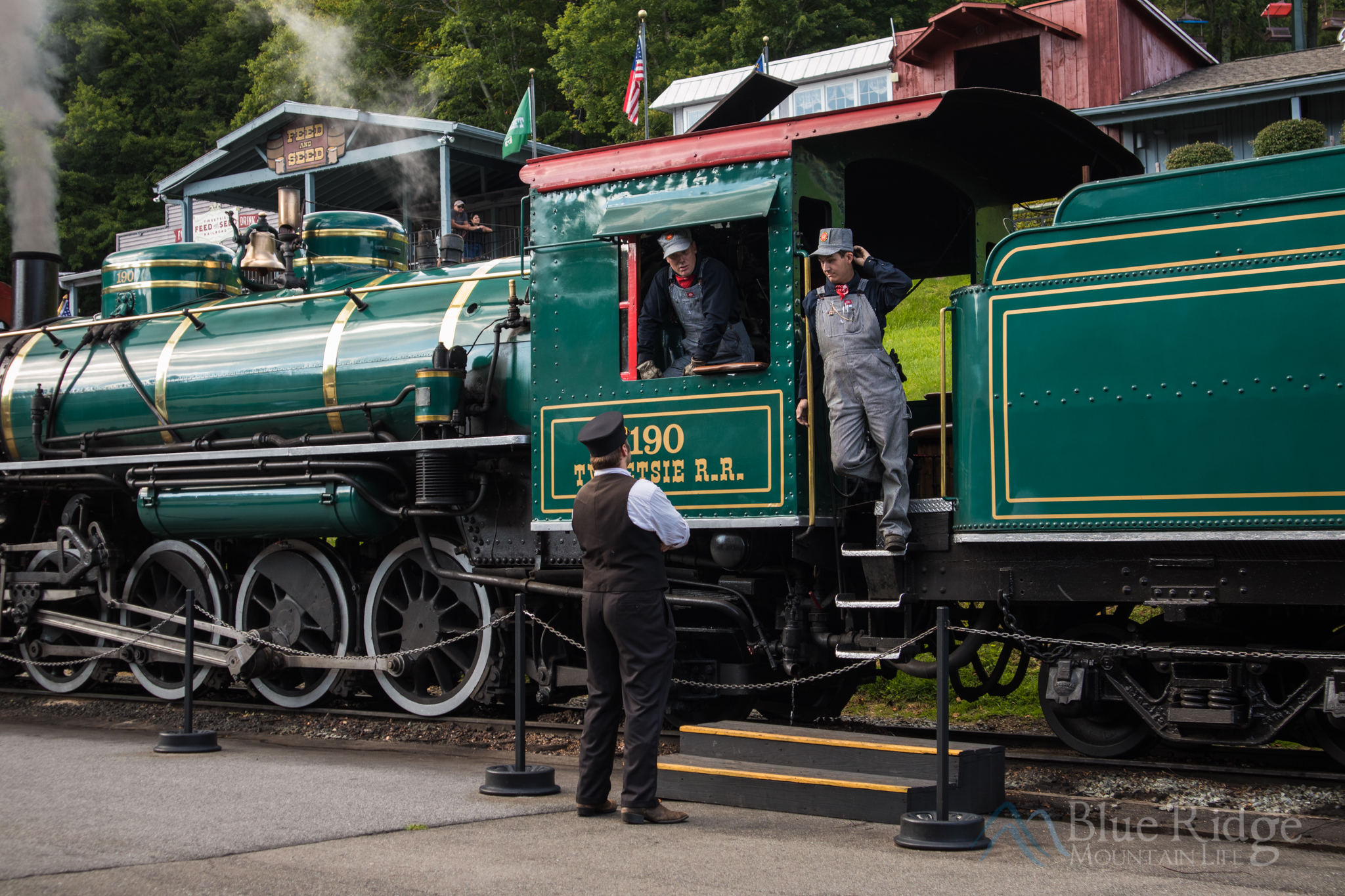 We then headed into the park to enjoy some rides, shows, and attractions.  We were looking forward to doing the locomotive shop tour at 2:00pm, as this is an area of the park visitors don't normally get to see.

We headed up the Chair Lifts to Miner's Mountain.   We love visiting Deer Park Zoo, and I wanted to ride Mouse Mine Train, to try out a new camera we received.  While there, we also got some drinks, and visited a few stores, before heading back down, and over to the Hacienda to get some more footage of the trains for our video.

On the way down, we stopped off at Fudge works can got some goodies, a Turtle Bar and a white chocolate dipped Rice Krispy square. 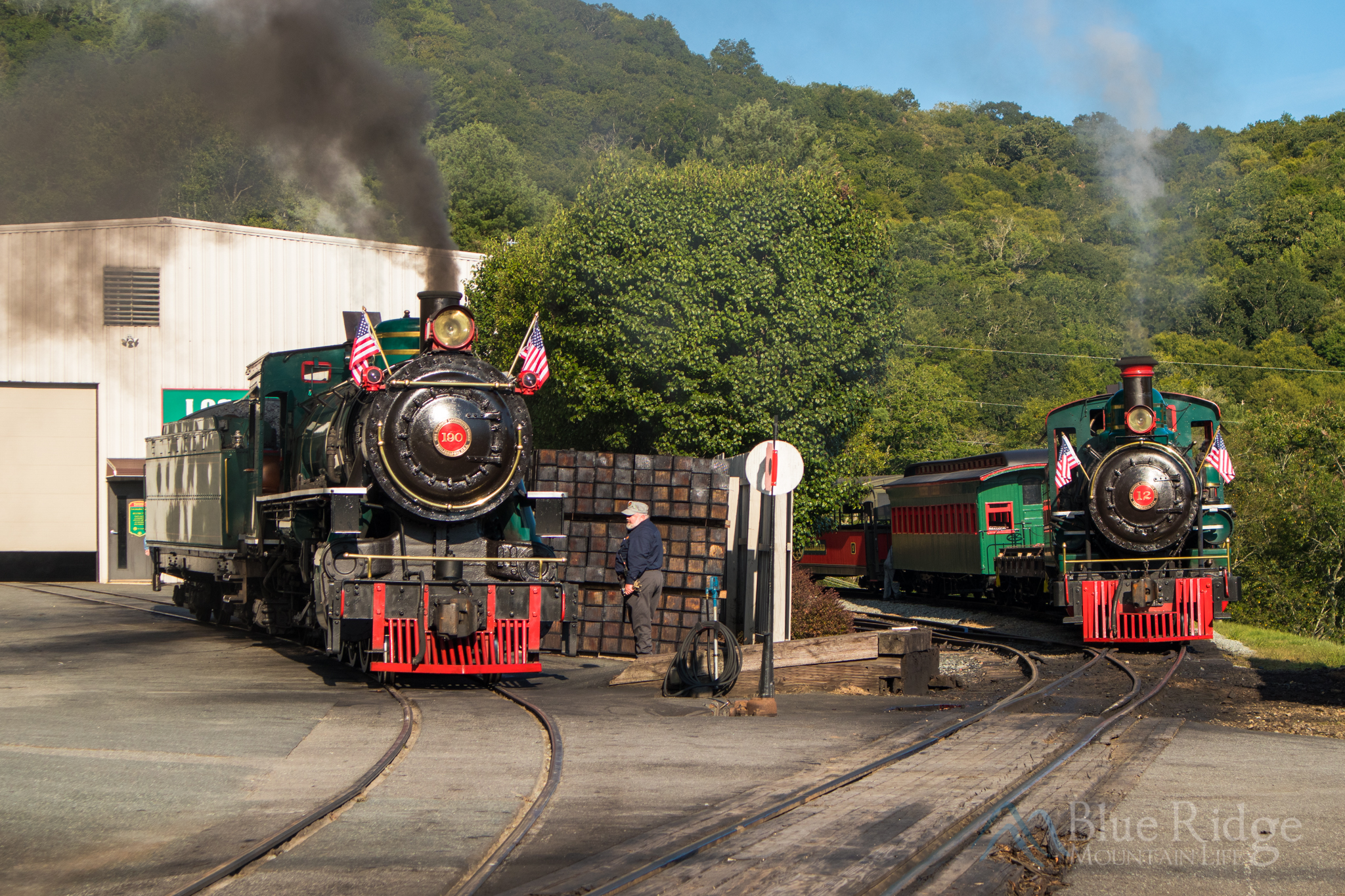 At 2:00, we headed over to the Locomotive Shops, which was really neat.  This is the first time we were able to see inside one of the most recognized steam locomotive shops in the United States.   One of the Tweetsie Engineers was in the shop showing people around and answering questions.

Engine #12 is the last of its kind, and one of the original engines from the former East Tennessee and Western North Carolina Railroad (ET&WNC), which was known as Tweetsie by locals.  Because it's the last of it's kind, there are not parts.  Any and all parts needed to keep this engine running, are made in the shops.

After touring the shops, we walked over to Tweetsie Palace to relax, and enjoy a show or two.  We happened to get there just as the magic show was starting.  We really enjoyed watching the magician, and then shortly after, the Tweetsie Can-Can girls came out and put on a great show.  Very entertaining, funny, and talented.  They can sing!

This was our first time watching the shows, and it was something we'll definitely be sure to do again.  The Palace has a snack bar, and reminded us of an old-time saloon type atmosphere. 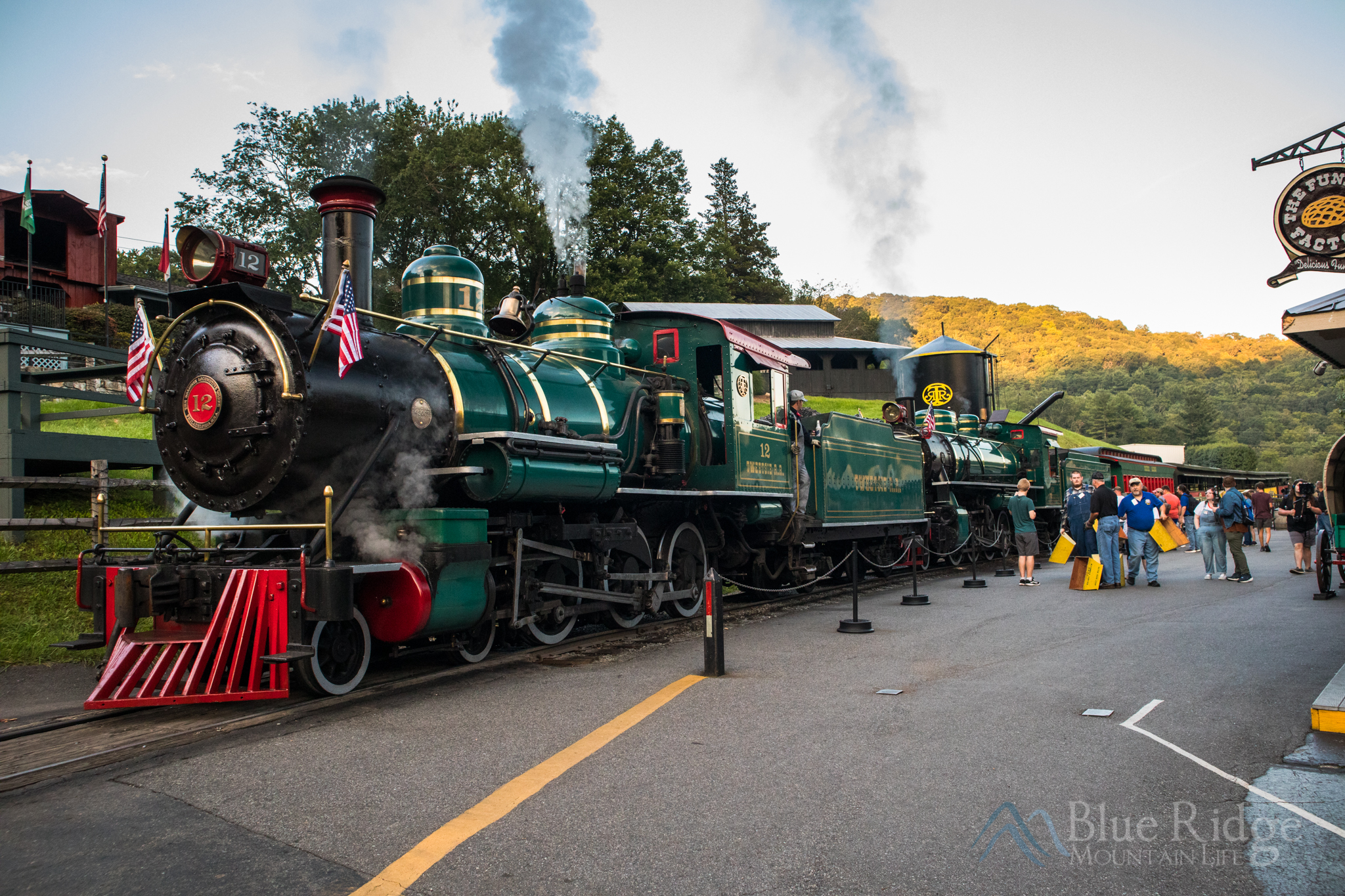 We killed some time by visiting stores, relaxing, and just watching all of the families and kids having a great time.

The last train ride of the day pulled into Main Street, and the park soon officially closed.  Those of us waiting for the after-hours evening photo special began to line up, as the train crews began to bring the trains back to the shop area to clean them up.

But both engines were left out, and the crews began to move the cars around.  We all wondered what was going on, and soon realized what they were doing - A Double Header!

The double header run has both Engine #12 and Engine #180 back to back, pulling the passenger cars.   This was going to be an extra special evening photo special!

We waited to board car #3, along with many others, and before long the double header train pulled up for us to board.  Loading was handled by Tweetsie staff and volunteers.

We soon heard the two whistles, and the evening photo special was off! 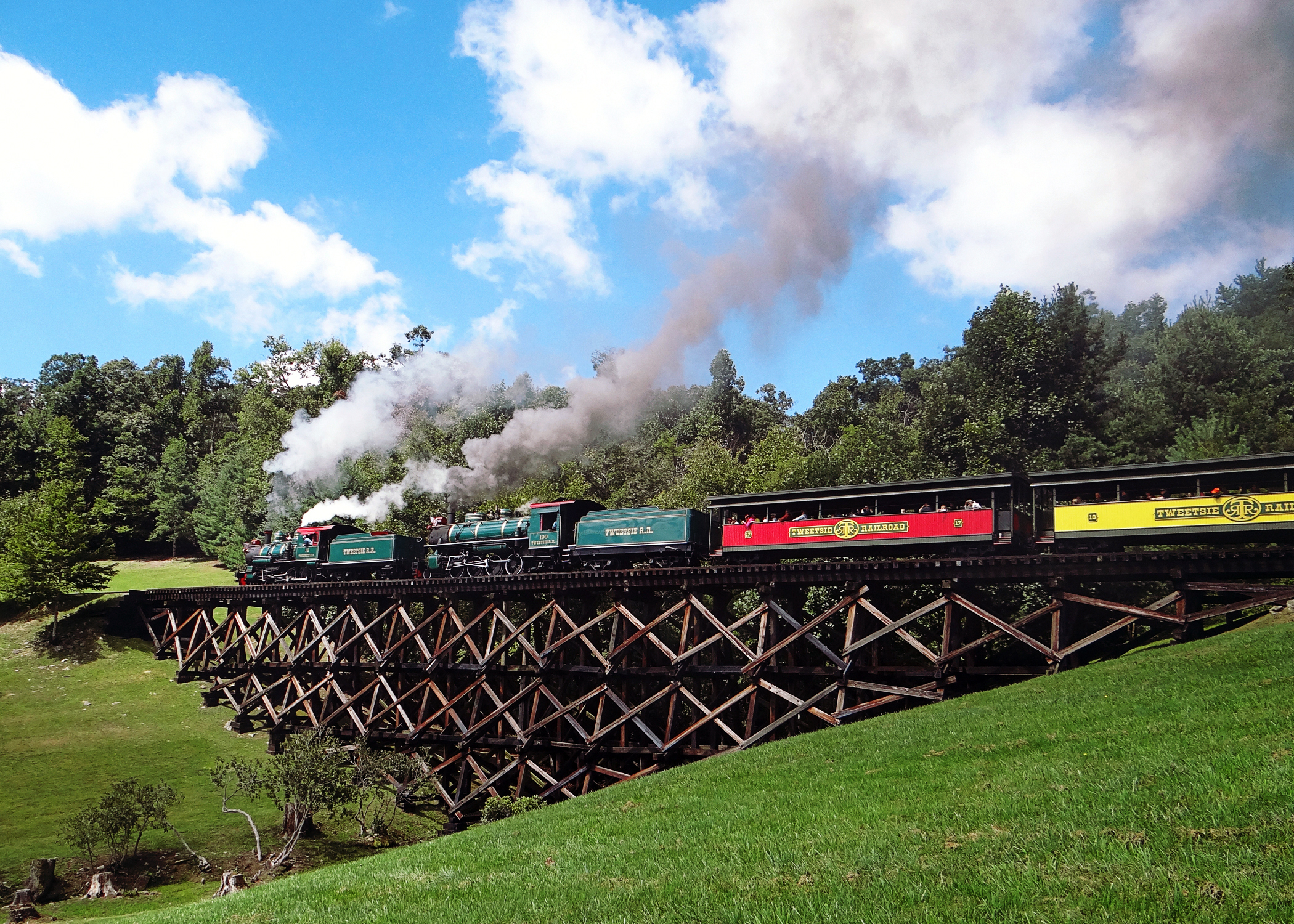 The train stopped just past the Tweetsie Trestle, and those of us 16 and older were allowed to get off the train to take photos and video.  The train then backed up, and made a fabulous run-by (see our video above).  With both engines at the head, duel smoke stacks and whistles, the run-by looked and sounded amazing.

After the first run-by, we were allowed to cross the track, and move blow the trestle for a second run-by.

We then re-boarded and headed to Frontier Outpost, for another two run-bys.  Once those were complete, we completed our run around the Tweetsie loop, got off the train, and took some photos of the two locomotives parked at the front.

You can see all of our footage of the days events and the photo run-bys in our video above and here on YouTube.

We called it a day, and went to get some food in Blowing Rock.  We're already looking forward to this event for 2023! 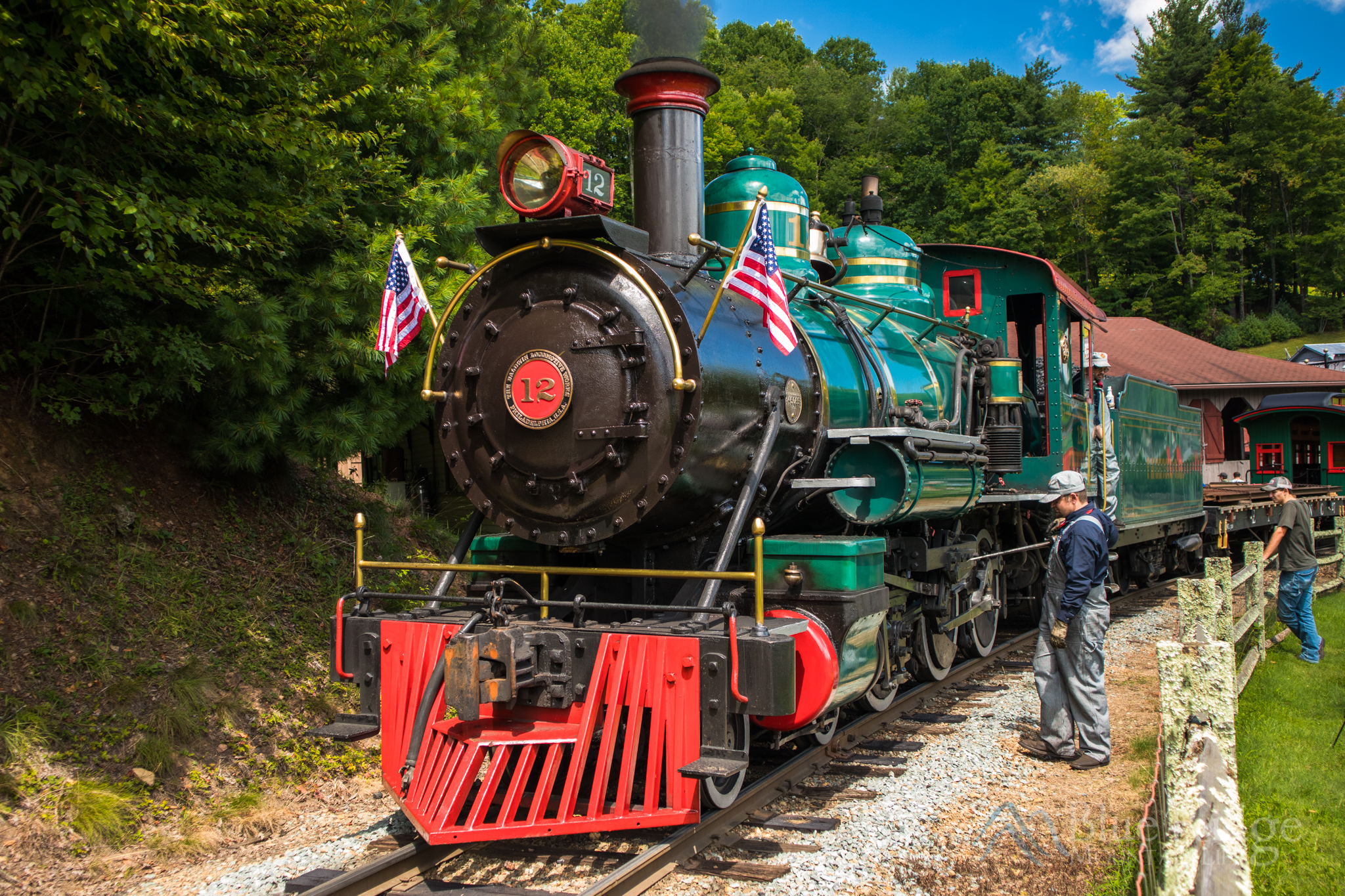 Railroad Heritage Weekend is so much fun, with unique events and attractions, and the Tweetsie staff really goes all out to showcase the history of the railroad, and the famous locomotives, #12 and #180.  You can see the pride the staff takes in their work, and the level of care they put into these engines.

The day was very busy, but fun.   We spent the entire day at the park, from open to close, and enjoyed every minute.

Here are a few tips to make your visit on Railroad Heritage Weekend more enjoyable:

Check out these articles below