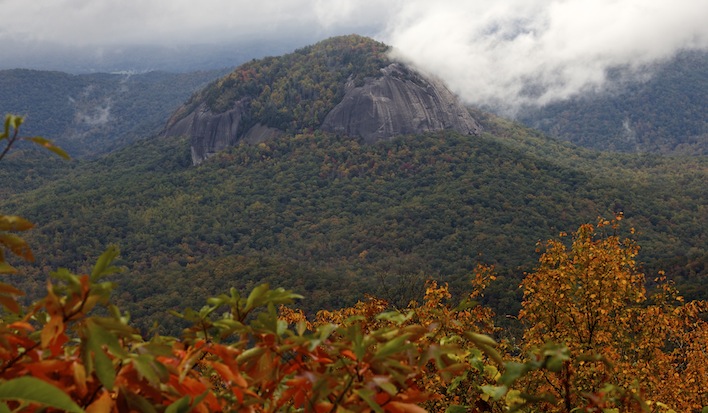 Jenn and I dropped the kids off at school this morning, grabbed some breakfast at the Waffle House in Waynesville (an incredibly great place to eat breakfast) and headed up the parkway to get some pictures of the nearly at peak Blue Ridge Parkway Fall Foliage.

The entire morning was overcast and very foggy, but we were hopeful that once we got on the parkway and started gaining some elevation that we might get above it. We exited highway 19/23 and picked up The Blueridge Parkway just outside of Waynesville and headed east towards Graveyard Fields. Color was everywhere, and while not at peak below 5000 or so feet just yet, the colors are still gorgeous and very close to peak on the parkway, even with no sunlight this morning.

We came to the second overlook for Waynesville, and normally we see a gorgeous sun and blue sky filled view, with the fog and mist settled in the valley. But not this morning. The view was of nothing but white fog. So we continued to climb up.

Once we got above 5000 feet, we began to see brief glimpses of mountain views and fall colors. Here are two photos we took that showed a little fall color.  These elevations are below 5000 feet, and as you can see they are not at peak just yet.  I’m thinking maybe by this weekend.

Anyway, here are the two best photos we took.  The rest were full of lots of gray clouds… 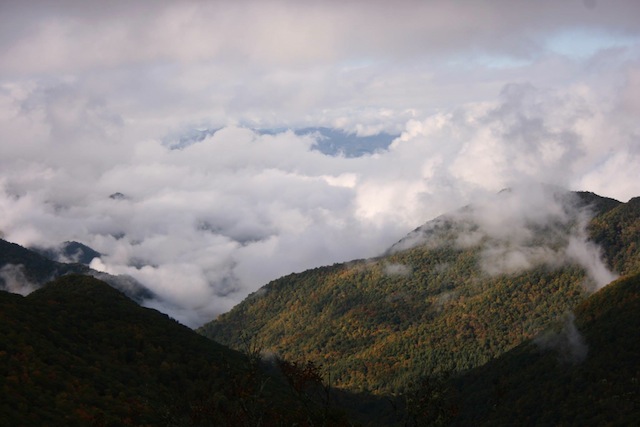 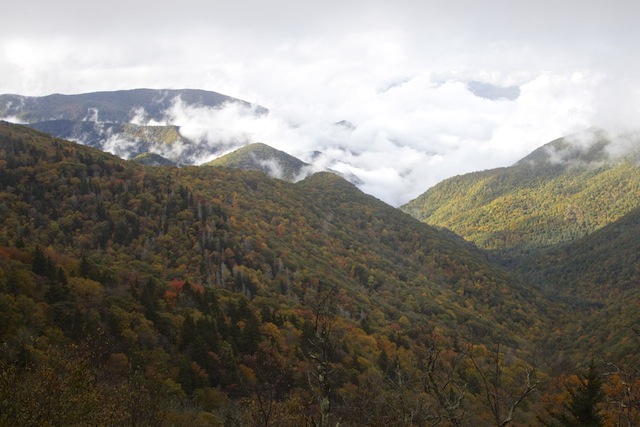 For the most part the Parkway was so overcast, you couldn’t see from any of the overlooks. The worst one was the “Highest Point on the Parkway” overlook. It was completely clouded over 🙁

But we kept driving, hoping to catch some sun and color at Graveyard fields.

Graveyard fields is a really beautiful and unique area on The Blue Ridge Parkway, located at milepost 418.   We often get asked on our Facebook page about the history behind the name “Graveyard Fields”.   A few hundred years ago, a large storm hit the area now called Graveyard fields really hard and blew down many of the trees in the area.   The stumps of the trees were soon overgrown with moss, and from a distance looked like tombstones, making the whole area look like a graveyard.  Hence the name Graveyard fields.   Another story tells of how lumber companies cut down the trees in the areas, and left the stumps.  Unfortunately the same area experienced two very bad fires, one in 1925 and the early 1940s.  These two fires decimated the area, and also cleared out the old moss covered stumps.

Because of the fire though, the Graveyard fields you see today is very unique, and includes lots of brush and grasses that turn a bright hue of red during the fall.  Graveyard fields also has some nice hiking trails and two water falls, with the lower falls (or second falls) being our personal favorite.

Even at 9:00am in the morning, Graveyard fields was already getting busy.  Due to being so overcast, we didn’t hike down to the falls to take pictures, but we plan to try again later this week if the sun comes out.  We did grab some decent photos from the parking lot: 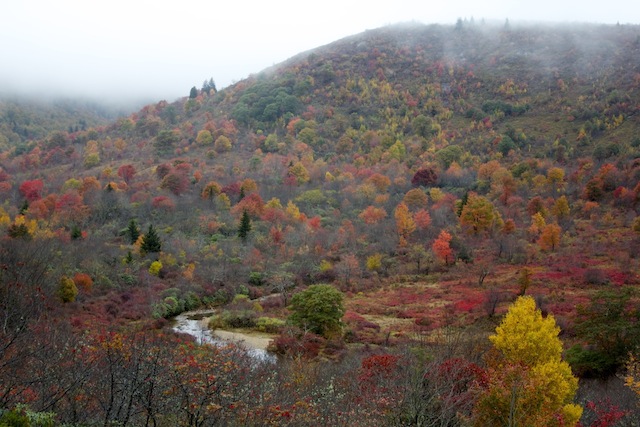 Graveyard Fields by Lar – note the read foliage growing on the ground. 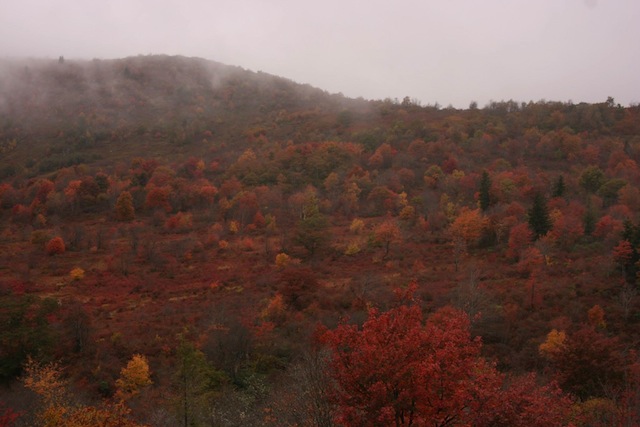 Warning, if you walk in the grass along the Graveyard Fields parking lot to take pictures, watch out for doggy doo-doo. Seems some people don’t know how to clean up after their dogs. I almost stepped in some, but Jenn saved me!

We hoped in the car and headed east about a quarter of a mile, where there is a fantastic view of the lower falls.   I took this shot from there, that turned out to be one of my best of the day I think.  Really gives you an idea of how strong the color is. 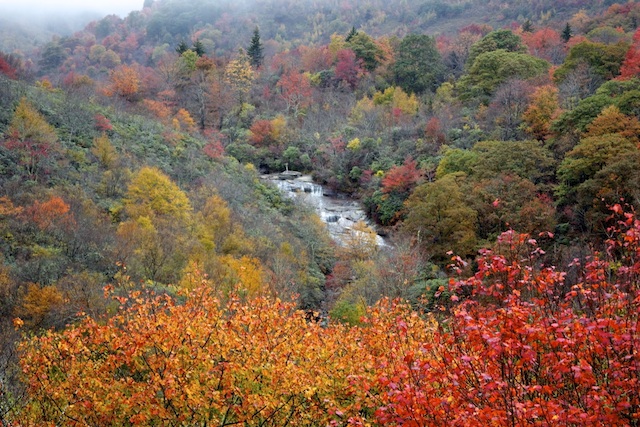 We then headed further east to see if Looking Glass Rock was visible. 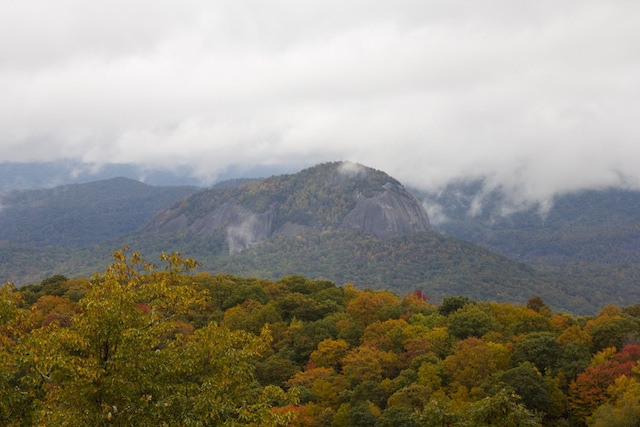 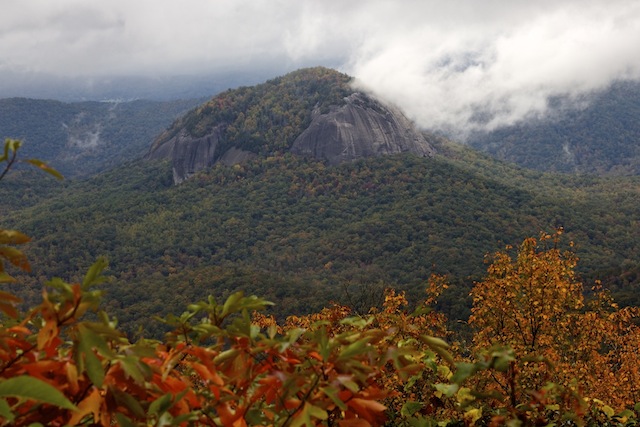 Another photo of Looking Glass Falls from the Parkway by Lar

Also found at Milepost 217 is the trail to Skinny Dip Falls. No, clothing isn’t optional, at least if you’re there when other people are! The trailhead is across from the overlook, and is about .5 mile in length and takes you straight to the falls. We didn’t make it down to the falls today, again due to the poor lighting and cloudy conditions. But we’ll try again later this week if it clears up.

Instead of getting better, the cloudy and foggy conditions just continued to get worse, so we headed back down the parkway to Waynesville and called it a day.

These pictures are so beautiful and they make me terribly homesick. I was born in Almond and raised in Asheville from age 3. You get those mountains in your blood and you never get over them, no matter how far you move away, in my case, California. Thanks for such beautiful pictures and reminders of home.

Thank you Betty, so glad you enjoy them. But sorry to hear they make you homesick! I do agree, they get in your blood. Thanks for your comment!