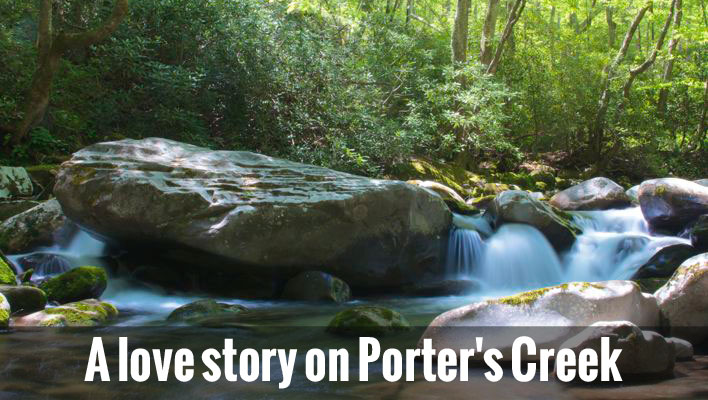 A love story on Porter’s Creek

A historical blog today about the good times and hard times in the mountains years ago. If you’ve hiked up Porters Creek inside Big Greenbrier (Part of the Great Smoky Mountains National Park) you’ve walked by the little Ownby Cemetery. The lost in those baby graves stones tells the story of hard times in the mountains, but let’s start with a true story of love on Porter’s Creek. 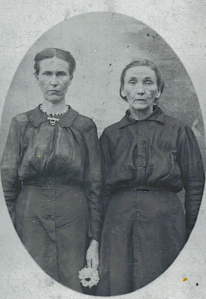 My Great uncle Elbert Posey Cantrell lived just to the right of the “Big” rock in the road trail about 200 yards from the parking areas. Elbert was born in 1861 and at a young age was the man of the family as his father Perry Phydilla Cantrell fought in the civil war. At that time he was living along the French Broad river near Bevard, NC.

One of the neighbors was the Whitmire family and they had a daughter named Julia (born 1870). When Julia was 9 years old she had a child crush on Elbert, but that same year Elbert’s father passed away and his mother “Lady Jane” decided to come over the mountains to the brier. Julia had to be a sad little girl as Elbert, now 17, is leading his Mother, brothers and sisters across the mountains. Here is Lady Jane and her mother, Sarah Jordan Kennmur (to the right).

Ten years later Elbert and his mother go over to Brevard to settle some land (deeds) questions for a local court proceeding. Not sure of the details (leave that to a good Hallmark writer) but Elbert married Julia and brought her to Porters Creek. Julia never saw her parents again. Elbert and his mother had built an old log cabin back behind where you find the Lady Slippers along the trail. They started a family and look forward to the future.

They had four children born in this small log cabin, but the last one Robert Posey Cantrell was a very hard delivery and both child and Julia died September 1st, 1896. Julia was only 26 years old. 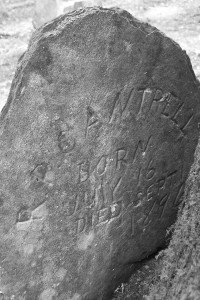 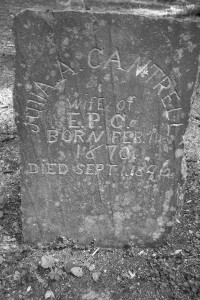 If you walk around the left side of Plemmons Cemetery in Big Greenbrier you can find their graves side by side. This wasn’t talked much about by the family and I’ve always wondered about their deaths on the same day. The baby was 2 months old at the time of death. Maybe Robert and her were both very sick and it just happened that way or did Julia end it when she lost her child?

A tree is starting to over take the baby grave in the cemetery. At the time of her death her living children were Essie (9), William Arthur (6) and Flem (4).

Julia, two years before, lost a set of twins that are buried at the Ownby Cemetery. But, life goes on in the mountains and four years later Elbert married Sarah Shults. He built her a new house on Porters Creek. Elbert and Sarah continued to build a large family. 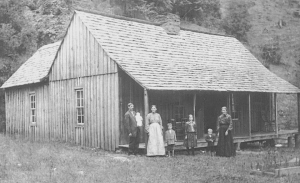 Today the only thing left is the spring house location, cut into the bank and about 20 yards from the big rock along the trail. Elbert’s boy William Arthur was a good lookin young mountain boy. 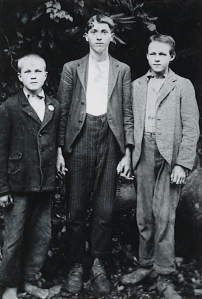 He’s the one to the far right in this photo to the right. I like how the brothers are holding hands for their dad’s photo taking. Yes, Elbert was the first old time photo man of the Smokies. He walked from Maryville to Greeneville taking photos for a living. W. A. (William Arthur) had become quite smittin by a young girl next door. She was Minnie Whaley, who was born up those rock steps along the trail and is the daughter of Wiliam “Vanderbill” and Sallie Whaley. No doubt they had worked together and played together while attending Granny College (school on Porters Creek behind the cemetery). When Minnie turned 16 (1911) and WA was 21 they got married at the main bridge in the Brier. It ws April and love was in the spring breeze that day.

Over the next four years they had three children (Oliva, Claude and Pearl) but the flu was attacking the Brier in those years and WA became very sick in 1915 and as Pearl came into the world Arthur departed at the age of 24. If you walk up Grapeyard ridge trail and go over to the Friendship Cemetery (40 yards up the hill from the river) along the old road bed, then turn into the cemetery and turn right up the hill you will find his grave. It’s the last one top right.

The year before WA and Minnie had lost their baby boy, Claude and if you walk up to the back end of the Ownby Cemetery (Porters Creek) you can find a stone that only has C.C. on it. This baby only lived 43 days and again tells the love and hurt feeling of living in those days in the mountains.

Minnie’s two girls a few years later in the Brier. 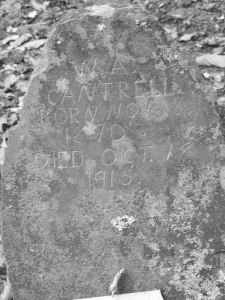 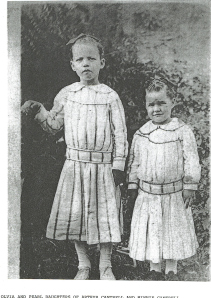 Minnie had to regroup and raise her children with help of family and friends till she remarried two years later to Cass Stinnett. Cass and her moved up Big Laurel and lived in the same hollow fields as Andy Rayfield apple orchard. So, if you go hiking up Grapeyard Ridge and turn left across the creek where you head towards Dodgen-Rayfield Cemetery you are in the right direction to find their home place. But, instead of cutting up the gap at the large tree towards the cemetery…you continue up the old road along the wet branch till you find a fallen chimney on your left. That’s was the place and it once belonged to Pink Cole, Mack Davenport and others. Cass and Minnie started a family of their own with Ida (1918) the first of their children.

Here’s Minnie and her parent’s family up Porters Creek. 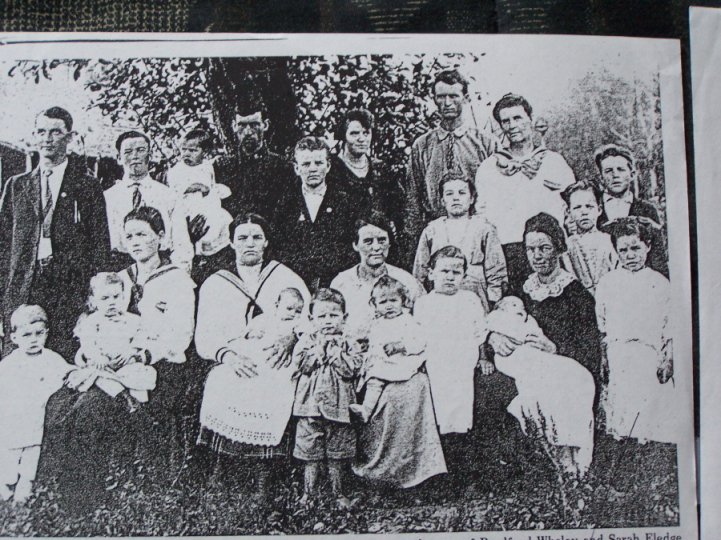 Minnie is the second Mother from the left sitting down holding her baby (Maud). Olvia and Pearl are to the far right in the photo. Cass is in the black shirt in the back behind Minnie holding Ida.

Minnie had a son named Dan (born 1929) and again the mountains sometimes requires a spirit and Dan soon died after living three months in the Brier.

The story goes that Cass didn’t treat WA’s girls or his own girls with Minnie very well. On January 20th, 1929 and at the young age of 34 Minnie dies in the Brier. Some say, that Cass may have posioned her and this is soon after the birth of Dan. Some say she was going to leave Cass after Dan’s birth and the truth is buried with them. But, I do know the day Minnie died all the children ran out of the house very fast all the way to their grandpa’s place on Porters Creek and never returned to that house again. They didn’t even go and get their clothes and Cass shortly after was never seen in the Brier again. He’s buried in Georgia some say, but I do not know for sure.

Minnie’s daughter Oliva Louise Cantrell Smith dies in child birth at the age of 23 in 1935. She is buried along side her Mother and brother in Friendship Cemetery. Go to the last graves in the very backside of the cemetery up in the woods to the right. 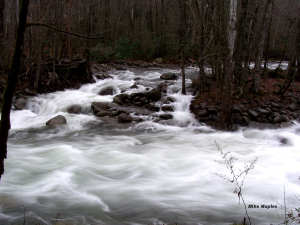 Yes, the Brier is a pretty place that we love to visit and also a place where love came as well through hardships and good times.

This is a guest article, written by Mike Maples.  Mike has been hiking in the Smokies for over 50 years and has several of his ancestors buried inside the Great Smoky Mountains National Park.  Mike was a hiking and historical guide for National Geography between 2004-2006 and mentioned in their magazine (August 2006) issue on the Smokies. Mike has also done genealogy research for the Sevier County Library in the past on families of Sevier County and East Tennessee.  You can read Mike’s blog here and stop by and see him at The Day Hiker in Gatlinburg.

Scenic Drives Things To Do

Hiking trails in the Blue Ridge – Our top 10 family favorites

Hiking Trails in the Blue Ridge Things To Do

Waterfalls in NC – The top waterfalls to visit

Things To Do Waterfalls